In an April 10, 2015 legal brief to the World Trade Organization (WTO), Canada has strongly defended the rights of WTO member states to legislate to control tobacco and, by extension, to protect public health. Canada’s brief is a third-party submission, soon to be available on the WTO website (www.wto.org), in a formal WTO dispute in which the Dominican Republic, Cuba, Honduras, Indonesia and the Ukraine are contesting the validity of new Australian law that requires plain packaging for cigarettes. Since none of the five countries sells any significant amount of tobacco or tobacco products to Australia, it is strongly suspected that the tobacco industry is somehow involved in the laying of these five complaints.

The clear and concise Canadian brief points out that the complainants have cherry-picked their way through international law, citing passages that support their case, while ignoring others that do not. The Canadian brief then provides a comprehensive review of all pertinent international law and judgements. The brief concludes that international trade law, when properly and comprehensively read, does provide WTO members with the ability to regulate in the interest of public health, and that this is “a right that was carefully and purposefully preserved” by the drafters of international trade law. If the Dispute Settlement Panel were to agree with the interpretations of the five complainants, not only would this “erode [WTO ] Members’ ability to regulate in the interest of public health,” it would also “create new rights for trademark owners [and] establish obligations for Members.”

The authors of the Canadian brief can see that an adverse decision against Australia in this case would not only be a blow tobacco control, it would curtail the right of sovereign nations to legislate to protect the health of their citizens. Let us hope that the Canadian argument will be persuasive and that public health protection will not sacrificed to the commercial interests of tobacco companies.

Canada's submission can be read here.
Posted by Neil Collishaw at 15:31

A Tale of Two Surveys

This week our crackerjack colleagues at the Propel Centre for Population Health Impact issued their most recent report on Tobacco Use in Canada. As always, this report is clear and offers important insights into the smoking behaviour of Canadians.

These are large surveys launched in 1999 by Health Canada and administered by Statistics Canada. They ask a wide-ranging series of questions on smoking behaviour of about 14,500 Canadians. Results which were once produced every six months are now produced every two years.

The CTUMS-CTADS prevalence data gives a very rosy picture. A rousing 40% reduction in smoking prevalence since the beginning of this century.


The results of another survey conducted by Statistics Canada give a quite different picture, especially if the number of smokers are considered and not merely the prevalence.

The Canadian Community Health Survey was launched at about the same time as Health Canada's Tobacco Use Monitoring Survey.
There are only a few questions on smoking behaviour, as the survey tries to get information on a wide range of health behaviours of the 65,000 Canadians interviews. Initially results were provided every 2 years - now they are given every year.

CCHS estimates of the number of Canadian smokers provides a much less rosy picture. The reduction in the number of smokers has been a more modest 14%.


The two surveys, launched in the same year and asking nearly identical questions about core smoking behaviour have been consistent in their differing results. CCHS always tracks higher. 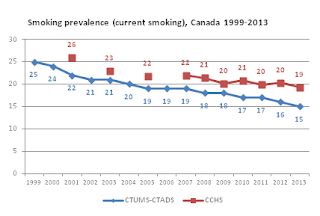 A wise colleague once reminded me that mistakes are inevitable -- and that the real challenge is the direction of your error.  Is it not prudent to err in the direction of not understating the problem?.

For me, that means using the CCHS data until it is proven to be less reliable, and to give profile to the number of smokers as well as smoking rates.

In a recent presentation to investors, Philip Morris International provided a graph of the 40 most profitable tobacco markets.

This graph illustrated three important variables that are sometimes difficult to get hold of: the number of cigarettes sold, the market share of Philip Morris and the total profitability of the industry.

With only 6 million of the world's estimated 1 billion cigarettes, Canada might be thought of as a relatively small market. But in terms of profitability, Canada would appear to be in the top 10 and a more profitable market than much larger countries, like France and the United Kingdom. 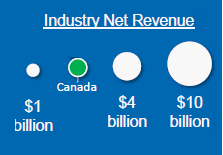 Sadly, the data used to create the graph was not released, so comparing profitability requires some physical measurement. Putting the results side-by-side suggests to me that the net revenue (profits) from cigarette sales in Canada are closer to $2 billion than to $1 billion.

On sales of fewer than 30 billion cigarettes, that means the companies on average are clearing almost 7 cents per cigarette, or $1.30 per package. 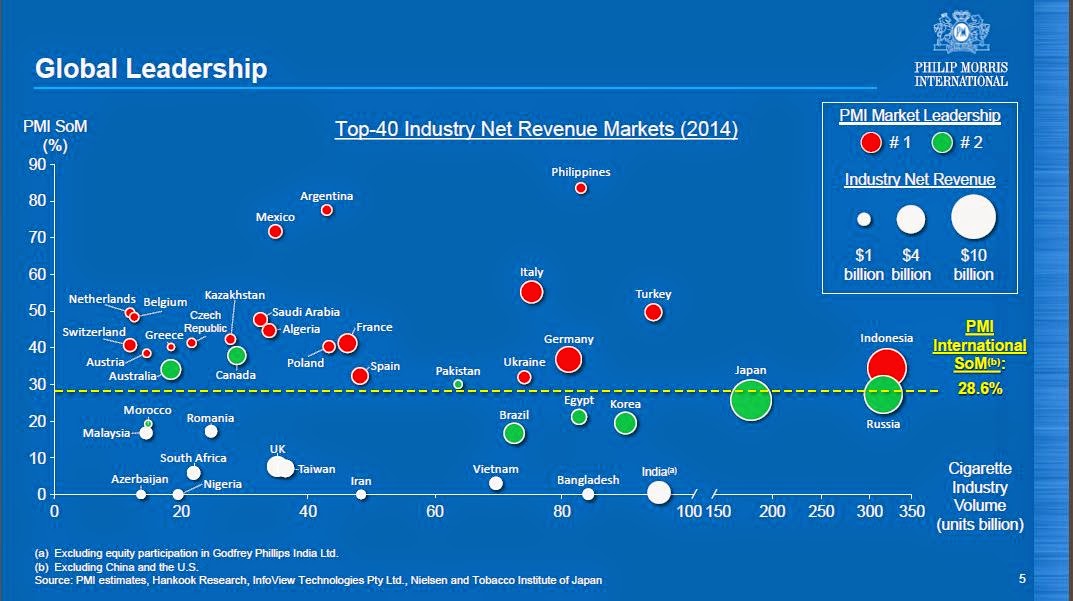 The entire presentation can be downloaded from Philip Morris International's web-site. The graph can be found on slide 5 of the March 17 2015 presentation to the Consumer Analyst Group of Europe (CAGE) Conference.

Posted by Cynthia Callard at 09:47

Manitoba raises taxes on cigarettes by $1.00 per carton

Manitoba became the most recent province to raise the price of cigarettes through taxation. Effective midnight last night, the provincial tax on a cartoon of cigarettes was increased by $1.00 to $59.00.

Additional excise taxes charged by the federal government ($21.03 per cartoon), provincial sales tax of 7% and GST of 5% gives a total tax bill of somewhere around $90 per carton.

Even before the tax increase, Manitoba had the highest cigarette taxes in Canada, with Nova Scotia close behind. The lowest rates are found in Ontario and Quebec.

Also today, Newfoundland and Labrador increased the provincial sales tax to 15%, which will have a modest effect on cigarette prices in that province.

Fact-sheet can be downloaded here: