Two months have passed since World No Tobacco Day (May 31), during which the Canadian province of Nova Scotia became the world's first jurisdiction to successfully implement a ban on menthol cigarettes.

It is possible that this event will receive as many conflicting views in Geneva, headquarters to both the World Trade Oragnization and the World Health Organization, as it has in Ottawa, where the federal government refusal to ban this harmful additive is at odds with the recommendations of health analysts and provincial governments.

Menthol: banned in Canada but not by the government of Canada

There are at least two main reasons why menthol in cigarettes is considered to be a harmful additive to tobacco products:  it makes cigarettes more attractive to young people, and by giving a cooling sensation it can trigger smokers to inhale dangerous smoke more deeply into their lungs.

Canada was one of the first jurisdictions to ban flavouring additives in cigarettes, but declined to include menthol in its 2009 law, and repeated this exemption when new regulations were issued earlier this year.

As the regulatory notice for this change sets out, there was a unanimous call from sub-national health authorities, health professionals, academics, and NGOS for "a total ban on all flavoured tobacco products, including menthol products." Only industry groups and a lone member of the general public opposed such a ban. "Of the 58 submissions, 50 specifically called for a comprehensive ban of all flavours, including menthol in all tobacco products."

No health rationale was provided for rejecting the call, and the regulatory notice makes clear this was a decision that was based on policy choices, not evidence. "While the Department is concerned about the use of flavours, including menthol in cigars as well as in other tobacco products, it has chosen at this time to focus its attention on reducing the appeal of certain types of flavoured cigars to counter industry innovation since the 2009 amendment. "


A small percentage of the Canadian market

The market for mentholated cigarettes in Canada is relatively small. (Euromonitor estimates that only 3% of the cigarettes sold in Canada have had menthol added to them.) Tobacco companies have not yet introduced into Canada the novelty menthol products, like 'click convertibles' that have become a popular niche market in South America and Eastern Europe.

Nonetheless, as with other flavoured tobacco products, menthol has emerged as a factor in the uptake of smoking by young people. Although it is a small market, it is thought to have a disproportionately harmful effect on vulnerable population and to create larger long-term consequences. 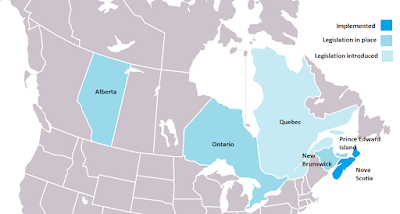 (See chart of implementation dates below)

The challenges, trade and otherwise.

The Canadian government may find itself in the awkward position of defending internationally a position that it refuses to accept domestically.

It was only a week ago that Canada officially notified the World Trade Organization that this trade-contentious contentious policy was already implemented in one Canadian jurisdiction. Earlier this summer, it had given notice of the upcoming restrictions in New Brunswick and Ontario. (G/TBT/N/CAN/458, G/TBT/N/CAN/462 and G/TBT/N/CAN/455). Presumably notices will also follow when the legal groundwork has been completed in Alberta, Quebec and PEI.

Bans on menthol have been much discussed at the WTO. A challenge to the US ban on clove cigarettes by Indonesia was upheld because its law did not also ban menthol, thus leaving two "like products" with different and discriminatory treatment. The suggestion that Alberta would impose a ban drew fire from Indonesia at a meeting of the Committee on Technical Barriers to Trade earlier this spring, even though no formal notice had been given. (G/TBT/M/65) Brazil's regulation banning all additives (Resolution No. 112, 29 Nov 2010) was discussed on at least four occasions by the same committee. (G/TBT/M/54, G/TBT/M/55, G/TBT/M/56, G/TBT/M/57 ).

Last year, the European Union adopted a new tobacco directive which required states to ban menthol flavouring by 2020. This has not yet been discussed at WTO, but the government of Poland has threatened legal action.

Legal action has already started against provincial bans. Imperial Tobacco filed a challenge against Nova Scotia's law a few days before the ban went into effect - although little more about this lawsuit has been made public.