A cheer went out when Health Canada released the results of the Canadian Tobacco, Alcohol and Drugs Survey (CTADS) for 2015.

The number of people who identify themselves as smokers in Canada had fallen to an all-time low -- only 3.8 million smokers representing only 13% of the population. If we consider only those who smoke on a daily basis, the results were even more encouraging: fewer than 10% said that they lit up ever day. This is one of the lowest rates among developed countries - lower than the rates observed for any OECD country!

But is it maybe too good to be true?

The CTADS is a relatively recent survey. It was developed a few years ago when the (former) government decided to reduce its investment in monitoring tobacco use, and decided to compress the annual Canadian Tobacco Use Monitoring Survey (CTUMS) into a bi-annual survey which also covered other sin behaviours, like drinking and drug use.

Even though they use the same questions, the CCHS has always produced higher estimates of smoking behaviour than either CTUMS and CTADS.

It may now be that the gap between the results of these surveillance tools is growing. The 1.6 million fewer smokers identified by CTADS in 2015 than by CCHS in 2014 represents about 40% more smokers. This is a big difference.

We may not have to wait much longer to learn of the CCHS estimates for 2015. Information on risk factors for heart disease are scheduled for release on December 12, 2016.

Perhaps we can leave the champagne on ice for a while.

Posted by Cynthia Callard at 12:31

A truthful image, and a sad reminder. 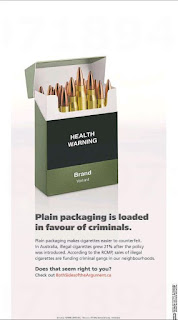 Japan Tobacco stepped up its campaign against plain packaging this weekend, with a new set of advertisements intended to drive Canadians to its website protesting plain packaging. (BothSidesoftheArguments.ca).

Its full-page ad in the national edition of the Globe and Mail portrays a package of cigarettes in a way that illustrates their harmfulness far more appropriately than any ad I have seen from a cigarette company in the past. Mimicking the traditional arched display of cigarettes, the package instead shows an arched array of bullets,

Aside from that delightful image, the advertisement also has a sorry echo of collusion between the RCMP and tobacco companies. In the ad and the website, the RCMP is extensively quoted. The impression given is that the force supports the position of the industry that the federal government's policies to protect health will "hamper their work" at catching bad guys.

If so, it would not be the first time that the force has controversially co-operated with this industry.

The RCMP honour guard was regularly recruited to pose before tobacco brands at sponsored events like the Export A Skins Game, du Maurier horse jumping, tennis and women's tennis. In those days, the RCMP called endorsing tobacco sponsorship part of its  "community relations."[1]

And let us not forget the way the RCMP did little to prevent JTI-Macdonald and other companies from participating in smuggling in the 1990s. Decades later (in 2008 and 2010), the companies acknowledged their wrongdoing), but the RCMP never 'fessed up to why it had so massively failed to get its man, why it had acted like such a patsy for the manufacturers,[2] and why it had allowed its senior officers, like assistant commissioner Rod Stamler, to retire onto the payroll of the industry.[3]

Posted by Cynthia Callard at 08:44

This week Japan Tobacco launched a web-page (bothsidesoftheargument.ca) against plain packaging in Canada, timed to coincide with the end of the first wave of public consultations on this important initiative.

The primary framing of its message on the web-site and the full-page newspaper ads to drive journalists to it was that the policy was being "rushed through after a short public consultation".

Appealing to Canadians' sense of fairness is likely to yield the company better results than to remind them of the toxicity of the product that they currently peddle. The public opinion survey they commissioned from Forum Research is focused at teasing out public concerns about fairplay, and the twin bogey men of contraband and the slippery slope of plain packaging being used on other harmful producxts.

Their concerns about fairplay did not seem to extend to the survey methods or their own communications.

Participants in the survey, for example, were shown two images a cigarette package on which they could assess the impact of the reform. The images of a "plain" and current package they were shown were stripped of many of the elements that are under consideration in the government's proposals. (The image below is taken from the survey report). The difference is relegated to 25% of what the participants saw. 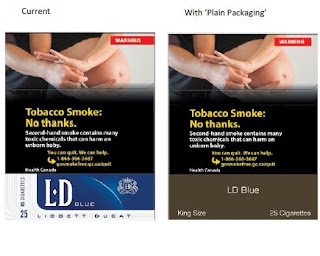 They were not given the opportunity to note the many ways in which the package was used to promote their brands before being asked whether removing these details might make a difference, or the many ways the government intends to standardize the cigarette product and its packaging.

By contrast, JTI encourages retailers to see the package as key promotional tool - as shown in the picture below, taken from their retailer web-site. Why was this image not shown to those surveyed? 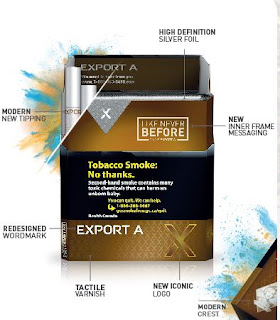 Nor was there much fair play when it came to the numbers they use. Australia is the only country to date has field experience with plain packaging, and JTI claims on its new web page that following plain packaging "in four out of five states, smoking prevalence has actually increased4."

Two funny things about this claim.

The first is that although the statement is referenced (number "4"), there is no corresponding footnote. The notes jump mysteriously from "3" to "5".  In the past the company has used commercial (read pay-for-use) estimates of smoking prevalence in Australia -- a practice which has already been the subject of detailed criticism.
Moreover, the Australian government commissioned their own analysis of the data that the tobacco industry cited (but hid) in their claims of no-effect. This analysis concluded that "over the 34 month post-implementation period from December 2012 to September 2015 ...the 2012 packaging changes resulted in 108,228 fewer smokers."

The second oddity about this yet-unsubstantiated claim is that it is contradicted by the Australian government surveys. which show that smoking rates in Australia continue to fall: "14.7% (age-standardised) of adults aged 18 years and over smoked daily (approximately 2.6 million smokers), decreasing from 16.1% in 2011-2012."

Another glaring unfairness in the company's presentation to survey respondents and viewers of its website is the suggestion that the initial consultation period of three months is the final opportunity for public input. Forum Research conclusion that "an overwhelming majority... think the public should be given more than 3 months" is part of the suggestion that they won't.

As Health Canada's consultation document pointed out, there will be an additional 75 day consultation period when the regulation is pre-published in the Canada Gazette. (The House of Commons is mandated under the Tobacco Act to conduct a further review, and can be expected to conduct further hearings).

In fact the consultation will be in the range of 4 to 6 months, which as shown in the graph from their report above, was supported by 63% of respondents. (JTI would have said "two-thirds"!).

JTI's concern for fairness was also missing in its appeal for web-readers to consider the views of Sinclair Davidson, an Australian researcher. This gentleman has already been exposed as a paid participant in a disinformation campaign by the Australian press (at least twice!) - as they were only last week by Canadian researchers in the peer-reviewed Canadian Medical Association Journal.

Posted by Cynthia Callard at 15:17

Canada scores 75% on a new index for sustainable tobacco control

A month ago, the International Union against Tuberculosis and Lung Disease launched an index to measure the sustainability of tobacco control programs. The index was published in the BMJ journal, Tobacco Control.

The Union and its network have identified 31 indicators that they considered to be associated with the future security of tobacco control programs. These included diverse and comprehensive adminstrative and legal structures -- whether there was someone assigned by government to implement tobacco control, whether that person was trained and funded, whether tobacco control laws were in place, etc.

The indicators were weighted based on their importance to the results, with a maximum total score of 131. Of these indicators, two were related to the circumstances of developing countries and were therefore not relevant to Canada. Discounting the scores for these 2 issues, a developed country like Canada might aspire to a total of 123 points.

Canada has long prided itself on being a "leader" in tobacco control, and might therefore be expected to do well on this score. A quick run-down, however, shows that there are many areas where Canada has not yet implemented measures that are expected by the Union and others of developing countries.

The list, annotated with our results for Canada, is pasted below. By our account, Canada gets a score of 92, or 75%.  In most schools that would be a B-.  Had Canada sustained the measures that were in place in the early 2000s (a national strategy, structures for input from civil society and experts, mass media, etc), the score would have been 104 (85%).

Until scores for other countries have been tallied, we won't know whether Canada is still a "leader". In the meantime, the index helps identify areas where we have lost ground -- demonstrating the usefulness of this as a "sustainability" index.

Tobacco Taxation: The index calls for tobacco taxes to represent 75% of the retail price, and for the taxes to increase greater than inflation and GDP growth. This is the case in some, but not all provinces. Quebec and Ontario stand out as jurisdictions which have allowed taxes to fall below the threshold of price and in which increases have not kept up with inflation.

Civil society representation in national TC advisory committees. A few decades ago, NGOs were included in the Steering Committee of the National Strategy to Reduce Tobacco Use. This structure was abandoned in the early 2000s.

Health promotion fund for /including TC:  There is no long-term funding mechanism for tobacco control at the federal or provincial levels. Unlike Australia, Switzerland and other countries, Canada has not established an independent health promotion fund, and parliamentary allocations for tobacco control are not secured against departmental decisions to reallocate funds, a common circumstance in some years.

National policy against TI CSR: There are no legal or policy barriers to the tobacco industry using corporate social responsibility to buy influence.

5.3 Policy across all Ministries. There is no whole-of-government policy to protect against tobacco industry interference, as required by Article 5.3 of the Framework Convention on Tobacco Control.

Posted by Cynthia Callard at 08:08