After all we have learned about smoking since the 1950s, why have we still not conquered the tobacco epidemic? The tobacco epidemic is persistent. The Canadian Community Health Survey reports that from 2000 to 2014, the percentage of former smokers in the Canadian population changed barely all, hovering around 37% (Physicians for a Smoke_Free Canada, 2016). 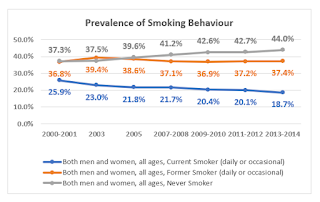 New quitters only just replace the proportion of those who relapse or die. The tobacco industry has long known how few smokers quit, which is why it seldom opposes smoking cessation programming. According to tobacco industry monitoring data, from 1971 to 1991, people who managed to stay quit for one year as a percentage of ever-smokers was almost always in the very narrow range of 1–2% per year. The lowest value was 0.4% in 1983 and the highest was 2.2% in 1976 (Imperial Tobacco Ltd., 1991). More recent, but similar low rates of quitting in Ontario were reported by the Ontario Tobacco Research Unit (OTRU; 2016). During the period 2007–2014, annualized quit rates were reported to be in the range of 1.3–2.2%.

Still, people do successfully quit, eventually. It may take them many tries, but many are successful. By 2014, there were about twice as many former smokers as current smokers in Canada, as illustrated above.  (Physicians for a Smoke_Free Canada, 2016).

How do people quit? Most successful quitters do so on their own. In Ontario in 2014, only 1.7% of smokers succeeded in quitting for a full year, and most of these quit on their own.  About two-thirds of those successful quitters did not use any of the ten cessation services evaluated by OTRU (OTRU; 2016). Currently, about two-thirds to three-quarters of Americans who quit do so on their own (Chapman & Mackenzie, 2010). Looking back in time, the figures are even higher. In 1986, it was estimated that over 90% of Americans who had quit smoking up to that point in time had done so on their own (American Cancer Society, 1986). In earlier years, less assistance for smoking cessation was available.  Most people quit on their own.

But what of the others, those who do seek assistance for smoking cessation? How successful are they? Nicotine replacement therapy (NRT) is a popular form of providing smoking cessation assistance and a Cochrane review of over 130 studies found that NRT achieved a success rate that was 50–70% greater than that achieved with placebo (Stead et al.,2012). However, there are sound reasons to believe that this apparent success is not maintained when the therapy moves from the research environment to the real world. John Pierce and his colleagues reported that after three or more months of follow-up, Americans who quit smoking on their own had slightly higher success rates than those who used NRT or some other form of assistance. Among heavy smokers, the NRT three-month success rates was 9%, compared with 15% among those who quit unassisted (Pierce et al., 2012).

Cessation programs have neither broad reach nor outstanding success rates. The Ontario government provides support to 10 different smoking cessation programs. These programs all use well-established forms of assistance of proven worth. They range from minimal interventions like helplines to intensive system-wide interventions in health care settings. Their reach and effectiveness were carefully evaluated. Collectively they reached 139,000 people—about 7% of all Ontario smokers. Of these, it was estimated that about 12,000 actually quit smoking, which amounts to only about 0.6% of all smokers in Ontario (OTRU, 2016). Ten government-supported forms of smoking cessation assistance yielded a barely perceptible increase in the number of people in Ontario who successfully quit smoking.

Many have been hopeful that electronic cigarettes (e-cigarettes) would help people quit smoking.  However, the evidence is not encouraging.  Those who use e-cigarettes every day, particularly the newer tank systems, do show modest rates of success at quitting cigarette smoking.  However, in the United States daily e-cigarette users account for only 19% of the users of these products. (Berry et al., 2018). When the overall picture is considered, taking into account all users of e-cigarettes, the evidence shows that e-cigarettes depress smoking cessation behaviour. Moreover, they serve as a gateway drug.  Young users of e-cigarettes are more likely to take up regular smoking. (Glantz and Bareham,2018).

The picture is bleak. Smoking cessation rates are low. Few people use assistance, and assistance is not very helpful.  E-cigarettes, a hoped-for solution to tobacco addiction are proving to be anything but.  The weight of evidence shows that, a population level, they depress quitting and serve as a gateway drug to regular cigarette smoking.

The Canadian federal, territorial and provincial governments all fund smoking cessation programs. While funding for these programs should continue, we should not expect them to be more successful in the future than they have been in the past.  Progress towards the Canadian government's stated goal of achieving less than 5% tobacco use prevalence by 2035 will not be made by greatly increasing smoking cessation programming, but rather by strengthening other areas of comprehensive tobacco policies and programs.  In future entries on this blog, we will explore some of these other ways that real progress could be made in tobacco control.

Physicians for a Smoke-Free Canada (2016).  Tobacco Use 2000-2014:  Insights from the Canadian Community Health Survey. http://www.smoke-free.ca/CCHS/InsightsfromtheCCHS-2016.pdf