France leads the way with four (and counting!) innovative tobacco control measures in 2017

Since the beginning of the year, France has implemented a series of ground-breaking tobacco control measures - and signalled that more will come into force next year. 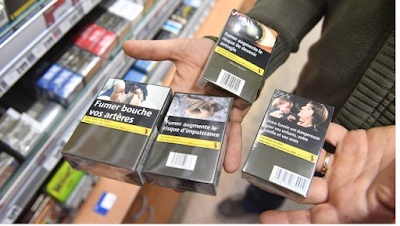 Plain Packaging
After a long fight against the tobacco industry and its mouthpieces, France has adopted laws requiring plain packaging of cigarettes. The new law was phased in and came fully into force on January 1, 2017. The long struggle for plain packaging was well described by French tobacco control advocate Emmanuelle Béguinot in a presentation she gave at the World Cancer Congress in Paris in November, 2016.

A taxing problem
In a lesser known but equally important tobacco control initiative, France has adopted a new tax of 5.6% on tobacco company revenue. The money so raised, expected to be about 130 million Euros per year (about 180 million Canadian dollars) will be used to finance further tobacco control initiatives in France. This is a very significant advance in tobacco control in France and worthy of emulation by other countries. The path to this achievement was a difficult one and the road ahead to effective implementation may be very bumpy as well.
The European Union has brought many social and economic benefits to its citizens, but the benefits afforded to corporate citizens do not always benefit the flesh-and-blood citizens. For Big Tobacco, France is a high-tax regime. To keep their money away from the French fisc (tax authority), tobacco companies have made their corporate presence in France all but disappear. All of their manufacturing and warehousing operations of cigarettes destined for France have been moved to other European Union countries. Even distribution operations have been off-loaded to another company – Logista. This left the French government with a taxing problem. Tobacco company profits earned in France were estimated to be around 850 million Euros per year (Annexe 10: Fiches d'évaluation préalabe des articles du projet de loi, pages 128 à 137), but there was no big tobacco company present in France that could be taxed. What to do?

Further study of the problem revealed that Logista is no ordinary distribution and wholesaling company. It is both of creation of and a front for the tobacco industry. It is 70% owned by Imperial Brands, itself a corporate front for Imperial Tobacco, one of the big four tobacco companies that sell cigarettes in France. The others are British American Tobacco, Philip Morris and Japan Tobacco Industries. By a sweetheart arrangement among these four, all of them distribute their cigarettes in France through Logista.

At the same time that tobacco company revenue is largely escaping taxation in France, consumption taxes (excises taxes and value-added tax) on tobacco products are among the highest in the European Union. The government, knowing that any further increase in tobacco excise taxes would be politically unwise at the current time, decided on a tax on tobacco company revenues. Still, the problem remained on how to tax companies that are not in France.

A taxing solution
France has an extensive and complex system of health and social security. Every year, the law governing the financing of this system needs to be revised and updated. Revisions to the 2017 edition of the law were completed in 2016. Inserted into this complex law (the text runs to 70 pages) was a single provision, Article 28, that creates a new 5.6% levy on suppliers (fournisseurs) of tobacco. By taxing suppliers, the government casts a wide net that catches the largest supplier of tobacco in France – Logista. Brands distributed by Logista account for 98% of tobacco product sales revenue in France. The government anticipates that Logista will pass this new charge on to the big tobacco companies whose products they distribute, and that the yield of 130 million Euros per year will be coming indirectly from the revenues of Big Tobacco that will be earned in France. A key feature of this new tax is that all the money will be devoted to government anti-tobacco initiatives. This will increase France’s current government spending on anti-tobacco work (about 30 million Euros) more than four times over.

New money for tobacco control
The government agency normally responsible for tobacco control in France is the Health Department. However, because the new tax measure was included in the law that governs universal health insurance, the new tobacco control funds will be administered by a national health insurance agency, known by its French acronym CNAMTS (Caisse nationale de l’assurance maladie des travailleurs salariés / the French national health insurance fund for salaried workers). CNAMTS is used to administering health insurance claims, but has little experience in tobacco control. Happily, the CNAMTS will not be alone in managing the tobacco control funds. A government decree of December 5, 2016 specified that the funds are to be administered by a 12-member Board of Directors made up of the directors-general and directors of several health insurance funds, directors-general of the Health Department, the Social Security Department, the Public Health Agency, the National Cancer Institute, and two members at large appointed by the Minister of Health. On February 7, 2017, Karine Chevreul, a public health physician and health economist, and Daniel Thomas, a cardiologist and Vice-President of the French Alliance Against Tobacco were named to fill these two latter positions. One hopes that this new Board of Directors can bring enough tobacco control knowledge and experience to the table to ensure that the new 130 million Euros per year for tobacco control will be spent effectively and wisely.

These three new measures, plain packaging, the tobacco company revenue tax and the new tobacco control fund all came into force on January 1, 2017.

Now the French government has taken this Directive to heart with a remarkable application of it in French law. A regulation issued on February 1, 2017, lists all the brands of tobacco products available for sale in France, their current price and the new prices that will be in effect in 2017. Every brand variant is listed separately. The list is 213 pages long and lists over 8,000 products. If an asterisk appears beside the name of a tobacco product, it means some element of its name is judged to be contrary to the European Union Directive noted above and its sale will only be authorized for one more year. Cigars marked with an asterisk can still be sold for two more years. Of the 8,000 or so products listed, about 1,300 of them are manufactured cigarettes distributed in France by Logista and account for more than 98% of the cigarettes consumed in France. The other brand names are fine cut tobacco, pipe tobacco and cigars distributed by Logista, together with tobacco products distributed by other small suppliers. For manufactured cigarettes, certain descriptors, like colours, will continue to be allowed, but others will disappear. Brand names containing certain descriptors like anis (licorice), biodégradable, menthol and slims will all disappear in 2018. The ban on “slims” necessarily bans the well-known brand name “Virginia Slims” from France. “Vogue” will no longer be in vogue. The Logista cigarette brand names and descriptors slated for extinction are summarized in Table 1.

Table 1. Logista cigarette brand names and descriptors that will no longer be allowed in France after 2018.

Vogue cigarettes and Café Crème cigars are also sold in Canada. The Canadian government has no plans to ban any brand names – yet. Our friends at the Coalition québécoise contre le tabagisme (CQCT) have called upon Minister of Health Jane Philpott to follow France’s lead and do just that. They have asked her to ban Canadian cigarette descriptors and brand names that have unacceptably positive connotations. We could not agree more.

Minister Philpott should not stop there. We would also urge her to follow France’s lead by requiring plain packaging for cigarettes, taxing tobacco company profits and using the proceeds to fund tobacco control.