BAT research on vaping suggests that for every 'switcher' there is a new user.

"Accelerating" is the key word in the presentations made by British American Tobacco to its investors yesterday. Not just accelerating the growth in new customers for its modern nicotine products, but also in "accelerating delivery" both of profits and of nicotine to those users.

A quick look at some of the statements they made which might be of interest to Canadian tobacco policy-makers.

New nicotine products (i.e. vaping) have reversed the decline in tobacco use.

In BAT's largest 40 markets (excluding the USA), the number of nicotine users (including both smokers, vapers and people who use oral tobacco) is now higher than it was a decade ago. The epidemic of nicotine addiction is not shrinking - it is growing. 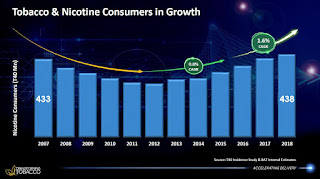 Forecasting suggests vaping products will not reduce the number of smokers

BAT is not predicting that vaping will replace smoking, but that it will add to it. Their 5 year forecast shows a very slight decline in cigarette smokers (even slower than the death rate would suggest), and a steady growth in other product users. (In the chart below, light blue is vaping, yellow is heat not burn and green is modern oral tobacco, discussed below).

Public health officials may be hoping that vaping will replace smoking -- but BAT is assuring its investors that this won't happen. 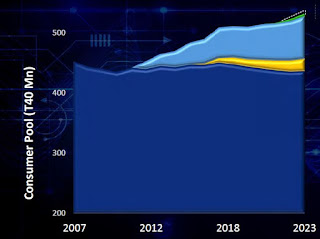 Vaping is now the main gateway to nicotine use for Canadians.

Over decades, Canadian governments have put laws in place to remove inducements for young people to smoke cigarettes. Television ads, billboards, retail displays and sponsored events promoting cigarettes have been squeezed out of young people's environment. But the same laws are not in place in Canasda (except in Quebec) for vaping products. The result, according to BAT research is that 5 in 10 "entrants" (new users) to the nicotine market in Canada are attracted first to vaping products. 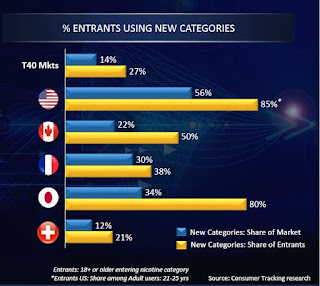 Vaping is not for switchers, its for starters.

The rationale given by Canadian governments (and others) for a lax approach to regulating vaping was that they wanted to encourage smokers to switch to products which were viewed (by government and others) as less harmful. But it turns out that more than half of those who use vaping products are non-smokers - a situation unlike heated tobacco products, where only 1 in 10 users are not already nicotine users. 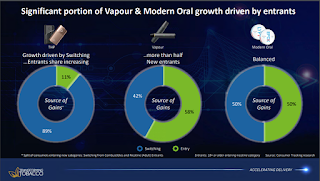 Big data, direct contact with consumers, digital marketing and retail loyalty programs are the primary arrows in BAT's marketing quiver. By contrast, Canada's recently revised Tobacco and Vaping Products Act is constructed around traditional broadcast marketing (as are other countries). There are few measures yet in place to monitor, let alone regulate, these activities. 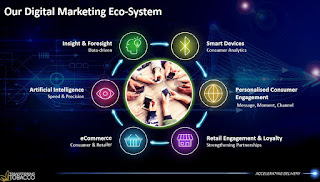 These are only a few of a hundred of more slides that cover important topics like poly-use, new products, regulatory impact, menthol bans and more. Food for thought!

Posted by Cynthia Callard at 08:17

JTI-Macdonald's promotional budget is a whopping $100 million per year - 25% of its earnings from cigarette sales.

A week ago, the Quebec Court of Appeal upheld a lower court ruling against the three main tobacco companies operating in Canada. JTI-Macdonald , the smallest of the three companies, created a bit of a commotion when it promptly filed for creditor protection under the Canadian Companies' Creditors Arrangement Act (the bankruptcy law for big companies).

One of the requirements of their application to the court was to disclose financial information, including a forecast of their revenues for the next few weeks.  This material was found as Exhibit DD in in Volume 4 of their application, which can be downloaded from the accountants managing the application. (It begins on page 176).

From this, we now know that the annualized anticipated gross revenue from sales will be about $1 billion, of which $575 million will be turned over to governments in the form of excise taxes and GST/HST. That leaves about $385 million in sales revenue net of consumer taxes for the year.

So far, so good. But it gets even more interesting.

A few lines down is the entry related to "Promotions and Marketing."

Canada is a country which decades ago banned conventional tobacco advertising. Yet JTI-Macdonald anticipates spending about $100 million on "various marketing and promotional initiatives, such as inventory support programs and brand support programs. Initiatives are generally paid 30 days in  arrears or via quarterly installments."

This, folks, is the amount they spend on paybacks to retailers. We have been told by retailers that they receive monthly payments from JTI in return for meeting their sales quota, but this is the first time that the amount has been made public. (Health Canada requires companies to report certain promotional expenditures but this is not among them.)

Elsewhere in the filing (in Volume 2), JTI mentions that it deals with 28,0000 retailers. If all of them get payments, it would add up to an average $3,495 each!  As below the radar bonuses go, that's not too shabby.

Otherwise expressed, for every $1 in revenue that JTI-Macdonald generates from cigarette sales, it spends $0.25 on promotional support. Is this what a ban on tobacco promotion is supposed to look like?
Posted by Cynthia Callard at 16:39