I have been intrigued at what I think is a recent development in tobacco advertising in Canada - colourful lifestyle-ish ads inside the tobacco package.

I first noticed these inside packages manufactured by British American Tobacco's Canadian subsidiary, Imperial Tobacco when I tripped  over -- almost literally -- a discarded package. Inside the slide pack were two ads: one for a version of the brand with a novelty filter which allows the smoker to rotate the filter overwrap and adjust the amount of ventilation. 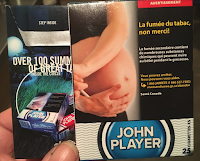 On the other side of the package was a picture that seems close to the style of promotions which I had thought were no longer allowed. Canada's federal Tobacco Act does not permit lifestyle advertising for tobacco products, and defines it as "advertising that associates a product with, or evokes a positive or negative emotion about or image of, a way of life such as one that includes glamour, recreation, excitement, vitality, risk or daring."

Well, the always-brief Canadian summer is over now, and this ad no longer seems to be running in the packages. We may never know whether Health Canada's enforcement team took action, or whether it was rotated out with the turn of the seasons. 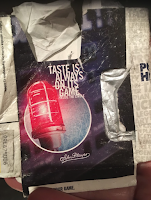 Today I similarly stumbled one of its replacements - an ad that links this cigarette brand with Canada's famous pastime, ice hockey.

"Taste is always on its game. Inside the Circle." is the line that runs across a picture of the goal light. (For the uninitiated, every time a goal is scored against the visiting team, the illuminated goal light is accompanied by a klaxon).

Underneath the image of the goal light is small text which invites smokers to "show us your game" and to send pictures to the company (care of comments@johnplayer.ca.). What they do with those pictures is another mystery ...

There was a time when the Player's logo was plastered across the scoreboards of many hockey arenas - (one from 1990 can be seen here). Now, it seems, the company has found another way to associate itself with Canada's national sport.

I came across another package advertisement on the sidewalk a block or two further down. This one associates the John Player Brand (JP) with chilling, and with popcorn and a screen in the background, evokes movie going.  (or is it evoking Netflix and chill?)


Post Script -- I have continued to come across lifestyle-like ads in John Player packages, and will paste them below as I do so. 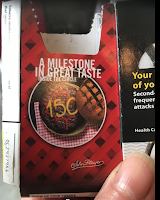 Posted by Cynthia Callard at 18:33