Every year federal and provincial governments provide the public with financial reports, including information on how much revenue the have collected in tobacco taxes.  The last of these 'Public Accounts' for the last fiscal year (April 1 2018 to March 31 2019) was tabled in the House of Commons last week. Time for an update on tobacco tax revenues!

Last year, Canadian governments collected more than $8 billion in tobacco taxes
Total tobacco tax revenue received by Canadian governments this year was $8.3 billion, of which $3.4 billion (41%) was collected by the federal government and $4.9 billion collectively received by the provinces. Almost all of this revenue results from the sale of cigarettes. Only the federal government provides details on the amount of tax received from taxes on different types of tobacco products. In the case of federal revenues, 94% cames from cigarette sales, 2% from cigars and 4% from all other tobacco products, including oral tobacco and heat not burn sticks. 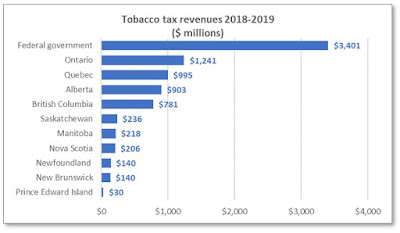 In real terms, tobacco tax revenues have not really increased  - or decreased - by very much over the past decade
Although tax rates have moved up (with the expected decrease in cigarette sales), the amount of taxes received has hardly budged in this decade once revenues are adjusted to reflect the impact of inflation. 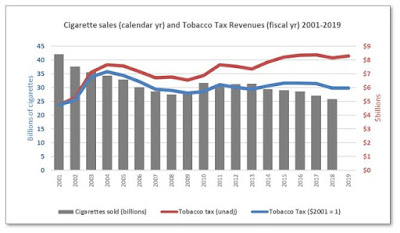 Last year, the average Canadian smoker paid $1,680 in tobacco taxes
The federal government receives an average of $690 each year from each of Canada's estimated 4.9 million smokers. The amount received by each province ranges from $665 (Ontario) to $1,674 (Newfoundland and Labrador) per smoker. The combined average federal and provincial tax burden for each smoker is $1,682, reflecting the fact that most smokers (63%) live in the provinces with the lowest taxes. 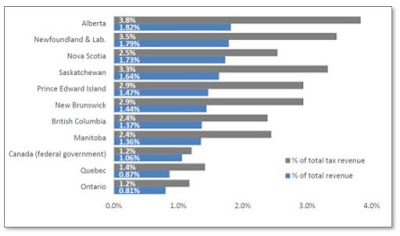 Posted by Cynthia Callard at 07:24