Earlier this month, Health Canada made available its second Vaping Product Enforcement Report., continuing its regulatory innovation of making available the results of its inspections of vaping manufacturers, importers and sellers.
In the spring-summer of 2019, following numerous complaints about infractions of the federal Tobacco and Vaping Products Act (including ours!), Health Canada dramatically increased its inspections of retailers, festivals, web-sites and other locations where vaping products were marketed or promoted.
By documenting and making public these enforcement efforts, Health Canada makes a significant contribution to our understanding of the challenges of regulating nicotine retailers and the importance of surveillance and oversight.
The infractions

Between July and December 2019, departmental officials visited convenience stores on 2083 occasions, and visited specialty vaping shops 1080 times. A small number (14 Convenience stores and 90 vaping shops) were visited on two occasions. The inspectors were verifying compliance with both the Tobacco and Vaping Products Act and also the Canada Consumer Product Safety Act. 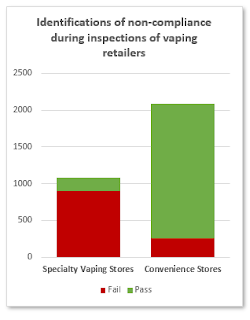 Health Canada also reports on the actions in took when problems were identified:
* none of the retailers were formally charged.
* there were no consequences recorded for 24% of the 993 occasions when non-compliance was observed.
* warning letters were issued on two occasions.
* seizure actions were taken in 73% of the occasions. It was not stated whether seized items remained on site or were removed.
* stop sale (voluntary actions by establishments to halt further distribution) were taken in 10% of occasions.

The seriousness with which Parliament saw the infractions of vaping law is reflected in the potential penalties: "Every person who contravenes [these sections] is guilty of an offence and liable on summary conviction to a fine not exceeding $500,000 or to imprisonment for a term not exceeding two years or to both."

The reality, sadly, is that Canada's federal tobacco laws do not provide for administrative monetary penalties (although they are part of the Cannabis Act that was passed the same year). Meanwhile, imposing penalties on those who disregard tobacco laws requires the government to engage a complex, expensive and time-consuming court route. This rarely happens. 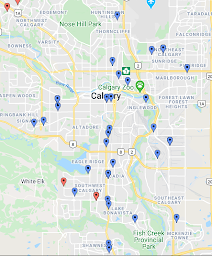 Health Canada's disclosure of the results of these compliance activities provides insight into the locations of retailers who were found to have failed to implement some provisions of the federal law. (The report does not identify those retailers who were found to be obeying it, although this is a practice in place with some health inspection systems.
This data allows for a mapping of where the observations of non-compliance took place. Such maps are currently available for:
* British Columbia (87)
* Prairie Provinces (249)
* Greater Toronto  (299)
* Rest of Ontario (223)
* Quebec (180)
* Atlantic Provinces ( 75 )

Only a small fraction of tobacco retail stores were inspected during this 6 month period - less than 1% of the 28,000 retailers reported by Imperial Tobacco to carry their products. The proportion of vaping specialty stores (for which we do not have an official count) which were inspected is likely higher, as these stores are less common. Ecigintelligence.com estimated that in June 2019 there were 1,100 brick and mortar specialty vape stores in Canada.

Posted by Cynthia Callard at 10:54