Last Fruday the Nunavut Legislative Assembly ture gave its approval to Bill 57, the "Tobacco and Smoking Act." By pioneering measures that address emerging tobacco control concerns, this new law provides a model for other Canadian governments.

Nunavut has even more reason than other provinces to give priority to tobacco. As the Minister of Health, Lorne Kusugak, reminded his colleagues, smoking rates in Nunavut are 4 times those in southern Canada. He estimated that three-quarters (74%) of Nunavut's citizens smoked, and that even among teenagers, rates were more than 50%.

The Minister explained that the measures in Bill 57 covered four broad themes: protection from second hand smoke, preventing young people from using tobacco, denormalizing tobacco use and regulating emerging products like vaping devices. Before being reviewed in committee-of-the-whole, the bill had been considered and approved by the Standing Committee on Legislation.

The Legislative Assembly not only supported Minister Kusugak's proposal, they strengthened it during their final review. Provisions that would have grandfathered the right to smoke in publicly funded rental housing were removed in order to accelerate the protection from smoke for other residents.

Bill 57 did not amend the previous tobacco law, but replaced it. The Minister noted that "aside from some consequential amendments introduced in 2018, Nunavut’s tobacco control legislation has not been amended in 15 years and updates are needed for this legislation to be effective."

With a few exceptions, Nunavut's tobacco control legislation is the strongest in Canada. Key advances include:

A comparison of Nunavut's controls on vaping products with those in place elsewhere in Canada is available here. 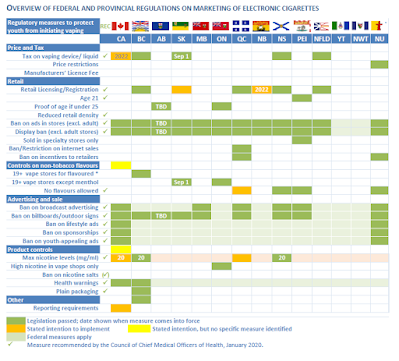 This is not the first time that Nunavut has led the way. In November 2003, Nunavut's legislature became the first in Canada to adopt a law to ban smoking in all workplaces, including bars. Within a few years, the rest of Canada had also done so.
Posted by Cynthia Callard at 06:34