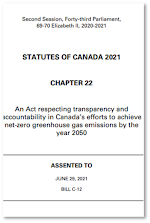 Last week, Royal Assent was given to the Canadian Net-Zero Emissions Accountability Act. This new law, as the Library of Parliament describes it,  "requires the Government of Canada to set national targets for reducing greenhouse gas (GHG) emissions and establishes a planning, reporting and assessment process with the aim of achieving net-zero emissions by 2050."

On the day the bill became law, the government announced new elements of its plan to reduce greenhouse gas emissions: From 2035, all cars and passenger trucks sold in Canada must be zero-emissions.

This post explores the parallels between Canada's targets for greenhouse gas and tobacco use reductions, and whether the measures being put in place to address climate change might also benefit public health if applied to tobacco use.

Canada's strategies to control tobacco and to address climate change share a number of common characteristics. They both:

The federal goals
Over the past 30 years, the federal government has set several domestic and international goals to reduce tobacco use and to reduce greenhouse gas (GHG) emissions. Environmental goals are generally expressed as a percentage reduction in emissions equivalent to mega-tonnes of carbon monoxide (MT CO2 eq). Tobacco use goals are generally expressed as achieving a reduced level of smoking or tobacco use prevalence (generally interpreted as those who have smoked cigarettes in the past month).Climate change: Canada's first international commitment to reduce GHG emissions was in 1992, at the United Nations Conference on Environment and Development in Rio at which the United Nations Framework Convention on Climate Change (UNFCCC) was signed. Subsequent targets were agreed to at Conferences of the Parties to this convention, including the Kyoto Protocol (2005), the Copenhagen Accord (2010) and the Paris Agreement (2015). At the most recent conference (2019), Canada committed to "a net-zero-by-2050 goal".

Smoking: The federal government has adopted tobacco control strategies since 1963, but quantified targets for general prevalence were first adopted in 2001, when the aim was to reach 20% prevalence in 2006 and reduce cigarette consumption by 30%. The goal of 12% was subsequently set for 2012, and in 2017 Health Canada adopted the goal of "less than 5% tobacco use by 2035".  In 2013, as part of the World Health Organization's Global NCD Action Plan, Canada participates in the goal of reducing smoking prevalence between 2010 and 2025 by 30% (from 20.8% to 14.6%).

These goals are shown in the figure below, together with data on annual levels between 1990 and 2019. To illustrate the rates of progress of both goals on the same graph, prevalence targets have been converted into the approximately equivalent absolute level of cigarette consumption. (Data and sources can be downloaded here). 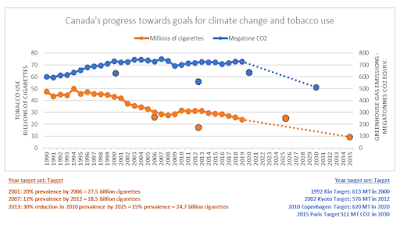 Provincial targets to reduce tobacco use
Six provincial governments have also set targets for tobacco reduction.
The other 7 provinces and territories do not have quantified targets for tobacco use reduction. Most provinces and territories have not updated their tobacco strategies since 2015. The exceptions are Quebec (2020), Ontario (2018), New Brunswick (2019), and Prince Edward Island (2017). More information on these goals and the strategies behind them is provided on a downloadable fact sheet. 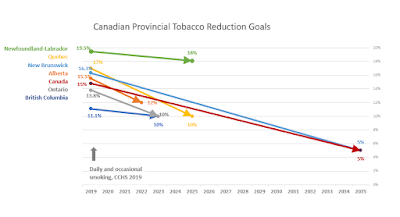 International alignment for a 5% prevalence target.
Several other national governments have adopted an "endgame", "smokefree" or other tobacco reduction goal that is formally interpreted as aiming for under 5% prevalence. Some have identified it as smoking prevalence (e.g. New Zealand), some as tobacco-use prevalence (e.g. Canada) and some as nicotine or tobacco use (e.g. Finland). Among these countries, two are aiming to achieve this objective by 2025. These goals, illustrated below, are described in a backgrounder which can be downloaded here.

Other potential lessons from climate change

Legal accountability is only one tool that the climate change strategies are using that tobacco control has not yet embraced. Others include: 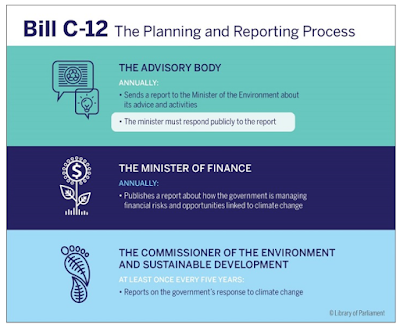 Posted by Cynthia Callard at 10:34