Last week the federal government released its most recent consumer research report on Canadian vaping behaviour. The results show that among a group of Canadian vapers, there was no overall decrease in smoking behaviour over the past two-years. 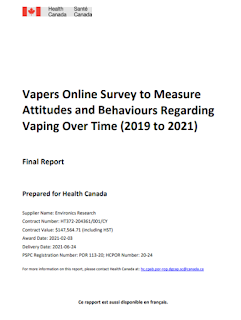 The Vapers Online Survey to Measure Attitudes and Behaviours Regarding Vaping Over Time (2019 to 2021) is a quasi-longitudinal ("return to sample") study conducted by Environics Research. This is the only Canadian government survey to follow the same group of individuals who are using vaping products over time. The baseline report was made available in the fall of 2019 (POR 047-17), with the first and second year results published 12 and 24 months later (POR 098-19, POR 113-20).
There are a number of limitations to how this survey can guide our understanding of whether or not the legalization of the vaping market is reducing population-level harm or whether it is contributing to it.
Nonetheless, this is the only (and consequently the best) quasi-longitudinal study of adult vaping in Canada.
Smoking rates have gone up each year.
The results of this report are in the same direction as those of studies published in the peer-reviewed literature: in real-life situations smokers who use vaping products do not show greater (or any) success in quitting smoking.
Among this group of Canadians, there were more smokers at the end of two years than there were at the beginning.  In 2019, 58% of the vapers were also smoking cigarettes (dual users). By 2021, 62% were either dual users or had stopped vaping and only used tobacco products.
Many of these Canadians changed their vaping or smoking behaviour -- half in the first year and one-third in the second. But there were more who relapsed or took up smoking than there were successful quitters. Over the two year period the number of vapers dropped by one third (33%), but the number of smokers increased (by 4%).
This lack of progress was not because smokers who vaped did not want to quit. Environics reported that "The vast majority of Dual Users are either planning to quit, or already trying to quit smoking; most of those who plan to quit intend to do so within the next six months." 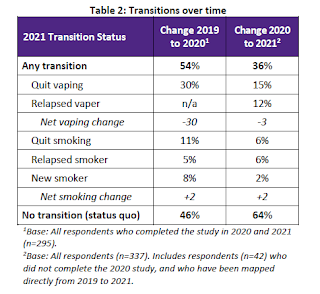 Among those vapers who had never smoked in 2019, more than one-third had done so by 2021.
Among the 337 panelists who agreed to the follow-up study, about one-quarter (24%) had never smoked a cigarette in 2019, but only about 16% were counted as neither a smoker or former-smoker two years later (Report, Table 44). This implies that one-third (8% of 24%) had moved from vaping to smoking at some point over the 24 months.
In last year's report, with results from almost 1,000 panelists, Environics was able to provide sufficient information on the transitions to allow a Sankey illustration of the transitions change over the first year of the study. The smaller sample this year (337) did not allow for such data release. 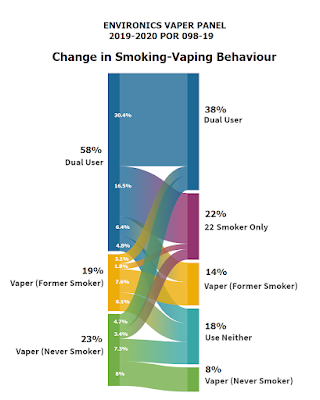 Tobacco flavour is the preference of vapers who used to smoke.
Almost one-half (46%) of former smokers who still vape prefer tobacco flavoured vaping products. Overall, tobacco and fruit flavours are equally preferred. Canadian vapers continue to cite a preference for flavours which are not legal for sale in Canada (candy, dessert, cannabis, energy, etc). 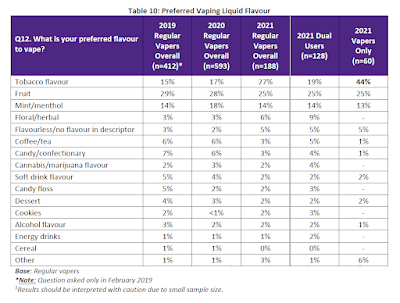 Vapers want to quit
Two-thirds (66%) of those who are vaping are planning to quit, and one-quarter (26%) are currently trying to do so. Most (74%) are turning to some form of cessation-aid, with NRT, cannabis and stop-smoking medications like Zyban most often identified as the method being used. 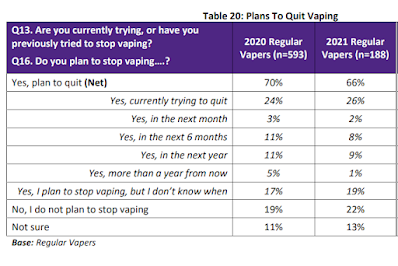 And more!
In addition to the web-based survey of panelists, Environics recruited 46 to share their experience and views on vaping and smoking, using this qualitative data to contextualize and amplify their conclusions. The wide range of experiences and views - including some related to the role of flavours and COVID-19 - are best enjoyed by reading pages 40-45 of the report!
Posted by Cynthia Callard at 07:59