This post reports on the results of data provided by Statistics Canada as a custom tabulation (purchased data extraction). The data cited in this post are linked at the bottom of this page.

Last September, Statistics Canada released some of the results of the 2020 Canadian Community Health Survey (CCHS). Among the data made available on their web-site were estimates of the number of Canadians who smoked on a daily or occasional basis. The 2020 data was considered good news: smoking rates had fallen to 13% - a welcome reduction by half of the proportion of Canadians who were smoking at the beginning of the century.

Celebration of this accomplishment was muted somewhat by the disclaimer that Statistics Canada had placed on the data. Because of COVID-19, surveyors had not been active during the summer, as they normally would have been. Face-to-face interviews had been terminated, and Canadians no longer had to look the interviewer in the eye as they reported on their health habits. The survey had captured more Canadians with higher education and homes than in previous cycles. As discussed here earlier, all of these methodological adjustments could be expected to somewhat depress measures of smoking. The agency has warned that: "users are advised to use the CCHS 2020 data with caution."
These cautions should be kept in mind when reviewing the data presented below.
Data gaps resulted when tobacco surveys were terminated.
Even though reforms to vaping laws were introduced in 2016 and passed in 2018, the federal government did not amend its major health survey (the Canadian Community Health Survey) to include questions about vaping behaviour until the 2021 cycle. The Canadian Tobacco, Alcohol and Drug Survey had formerly included questions on vaping, but the tobacco-relatesd questions were dropped from this survey after the 2017 cycle. A consequence of these decisions was that there were no general survey in the field in the 18 months following the legalization of these products.
As an interim measure, Statistics Canada implemented the smaller-scale Canadian Tobacco and Nicotine Survey in the fall of 2019. Health Canada also commissioned a handful of questions on vaping as part of a "Rapid Response" module for the 2020 CCHS. Rapid Response modules are generally asked of a portion of the survey and the results are made available to the commissioning agency and to qualified researchers in a reduced timeframe. Results are generally not included in the regular data releases
This module was in the field in January to March 2020, and September to December 2020. Results for 3 questions related to current, ever and daily use of vaping products (cross tabulated with smoking status) were provided to us last week by Statistics Canada as a custom tabulation. The sample size was not large enough to provide breakdown by age or province.
Results from this module and other CCHS cycles suggest that:
The drop in smoking results from a growth in the never smoking population, not an increase in quitting.
The drop in smoking that was measured by this cycle of CCHS was accompanied by an equivalent uptick in rates of never smoking. The rate of former smokers was essentially unchanged.
The customary 3-variable definition of smoking behaviour shows that the proportion of Canadians who are former smokers has barely changed over the past 15 years. 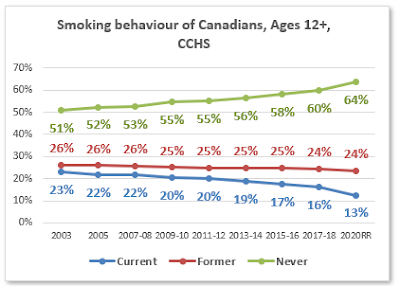 A display of results of full set of smoking behaviour variables (shown below) provides a more detailed picture of the extent to which never-smoking is driving the change in smoking rates. Between 2017-18 and 2020, the percentage of Canadians who had never smoked a single cigarette increased by 4 percentage points. The proportion who had experimented (smoked under 100 cigarettes) remained steady at 13%, as did the proportion who had quit smoking more than a year before the survey was taken (23%). The proportion of daily and occasional smokers fell by a combined  3 percentage points (from 16% to 13%).
Another figure smaller than in previous years was the proportion of the population that had quit smoking in the previous 12 months: 1.1% in 2020 compared with 1.3% in 2017-2018 and 2.6% in 2003. In absolute numbers, in 2020 there were 356,700 Canadians who said they had quit in the past 12 months compared with 414,900 average of  2017-18, and 679,900 in 2003. 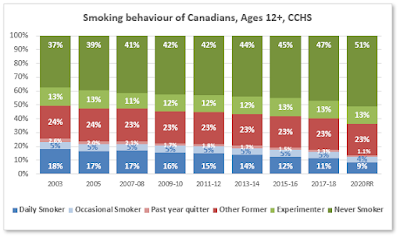 Relatively few Canadian smokers (2%) are switching to vaping.
Health Canada states that  "potential public health benefits associated with reducing tobacco-related disease and death might be realized if adult tobacco users either quit or switched completely to vaping as a less harmful source of nicotine."
These CCHS results will have disappointed those who were hoping that the change in legislation would encourage smokers to switch to vaping products. In the year before the survey, relatively few smokers (68,500 of 4.1 million smokers, or 2%) transitioned from cigarettes to vaping. There were an additional 288,200 recent quitters who were not vaping at the time of the survey.
One fifth of those who said they had stopped smoking in the past 4 years were vapers (206,100 of 1.1 million former smokers). This time period which coincides with the period when legislation to legalize vaping was introduced.
The CCHS estimate of the number of past-year smokers who vape is consistent with the results of the 2020 CTNS, which found about 64,300 Canadian smokers used vaping to quit and were not smoking at the time of the survey. Because the CCHS had also asked about methods used to quit, the results suggested that those who used vaping products when trying to quit were no more likely to succeed than those who tried to quit using other methods.

Legalizing vaping does not appear to have increased recent quitting rates.
From the perspective of encouraging smokers to quit, the CCHS results are no better than in previous cycles. The survey found a third of a million Canadians (357,000) had stopped smoking in the previous year, down from 414,900 in the annualized estimate of 2017-2018.
In absolute terms of people, this is less than in any other survey cycle, although when measured as a percentage of remaining smokers, it is consistent with historic trends. 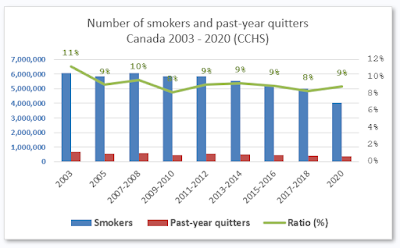 Most (71%) Canadian vapers are not reducing harm.
The 2020 CCHS Rapid Response module identified 1 million Canadians who vaped in the past month and 653,100 who did so on a daily basis.
Among past-month vapers, fewer than one-third (308,900) were using these products in a way Health Canada considers to reduce harm, in that they had once been smokers but no longer were. Virtually all of these were daily vapers (306,900), representing less than one-half of that total.
More than two-thirds of vapers had either never smoked at all (15%), had only experimented with cigarettes (13%), were also smoking either on an occasional or daily basis (20% and 24%). For these Canadians, the use of these products is not held by Health Canada to reduce harm.
These results were very similar to those of the 2020 Canadian Tobacco and Nicotine Survey. 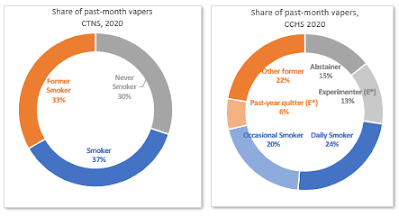 Trying a vaping product results in daily use for 1 in 8 Canadians
According to this survey, almost 5.6 million Canadians have ever tried a vaping product, which is 17% of the population surveyed. Of these, 1 million are past-month users (3.4% of all Canadians, and 19% of ever-users), and 653,100 vape on a daily basis (2% of all Canadians and 12% of ever-users).
The likelihood of becoming a daily vaper is very different for those who have never smoked than for those who have. While the estimates are qualified with coefficients of variation so large that caution is required, they suggest that 1 in 20 never smokers who tried a vaping product was a daily user in 2020, compared with 1 in 10 smokers and 1 in 4 former smokers.
This high retention rate makes vaping an attractive proposition for commercial businesses. Not surprising then that vaping companies give away free samples of their products. 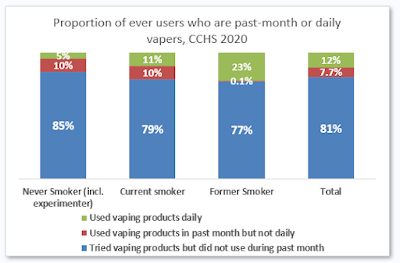 Population turn-over contributes to reductions in smoking rates.
The Canadian population covered by this survey grew by almost 1 million people between the bi-annial cycle 2017-2018 and 2020 (from 31.2 million to 32.1 million Canadians aged 12 years or older). This growth included a gain of 1.7 million  more Canadians who report that they have never smoked 1 cigarette, 136,000 more who have smoked between 1 and 100 cigarettes (but don't smoke now) and 33,000 more Canadians who say they used to smoke, but no longer do. Those population increases were off-set by a decrease of almost 1 million smokers.
Recently-released results of the Canadian Census shed light on some of the underlying population changes. Four-fifths of the population growth in Canada in this period was the result of immigration, and not due to births and deaths. Immigrants are much less likely to have ever smoked than native-born Canadians. Both smokers and former smokers die sooner than do never smokers, so deaths also contribute to boosting the proportion of never-smokers in the country. 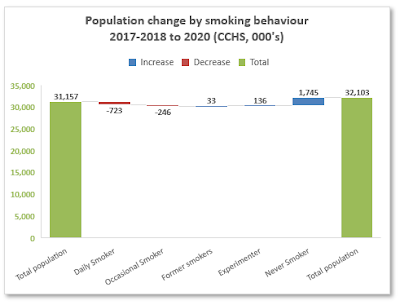