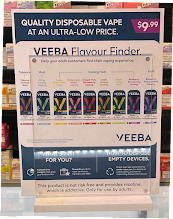 Update: The VEEBA product is manufactured by Bidi Vapor and sold in the USA as the Bidi Stick. In mid-June, the manufacturer made public that it had entered into an agreement for PMI to distribute the product outside the United States.
-----------------------------------------------
This week Canadian consumers and health regulators are facing a significant development in the vaping market, as the world's largest tobacco company introduces VEEBA - an affordable and fancy disposable vape.

Philip Morris is the last of the big tobacco companies to launching vaping products. It's decision to put its deep pockets and extensive marketing savvy behind cheap and cheerful disposable products may be a marker of a further shifts in the FMCG nicotine market.

PMI's VEEBA is a one-time use electronic nicotine device manufactured by Philip Morris International (PMI) and distributed in Canada by PMI's subsidiary Rothmans, Benson and Hedges. 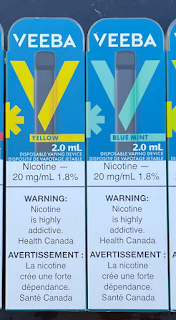 Each device is sold with 2 ml of nicotine salt e-liquids containing 20 mg/ml of  nicotine, the maximum nicotine concentration allowed in Canada. The disposable contains almost three times as much liquid as a JUUL pod (0.7 ml) and about the same as in a VUSE epod (1.9 ml), but less than some other disposables sold in Canada (ALLO products, for example, are sold with up to 10 ml of liquid).
PMI suggests that 350 puffs of vapor can be drawn from the device. It uses a 280 mAh battery.
In provinces without flavour restrictions, the device is sold in 9 flavours. In addition to "classic tobacco", there are 8 colour-themed options. 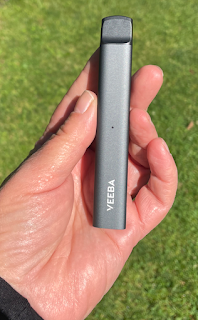 The packaging is more detailed than other disposables currently on the market. The device is enclosed within a plastic box which in turn is inserted into a cardboard sleeve and then wrapped with cellophane.
A surprise market launch.
The arrival of this product on the Canadian market came with very little advance notice.  The first public notice that PMI gave investors of its intention to begin selling disposable vaping products was made during a presentation on June 14 to the Deutsche Bank Global Consumer Conference.  This is notable, given that PMI has spoken of other 'reduced-risk' initiatives years in advance of their commercial execution.
So rapid was the arrival that the supportive website (www.veeba-vape.com) is not yet properly on line.  Those arriving at this web address are currently informed that "VEEBA website coming soon!"

PMI's new product is now the lowest-priced disposable vape on the Canadian market.

The suggested retail price for VEEBA is $9.99, although some retailers are currently listing it for $7.99.  (When the new federal tax is applied this coming October, the price will be increased by $1, which is the new set tax for 2 ml or less of e-liquid).

By comparison, pods for PMI's new VEEV device cost $12.99 for a package of two, with BAT's VUSE Pods selling for $13.99 for a two-pack. A package of four JUUL pods costs $20.99. Throughout most of Canada, a package of the cheapest cigarette brand costs more than $10.

For experimenters, including teenagers, VEEBA is now the most affordable nicotine option for trial use. 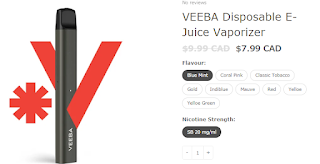 The rise of JUUL devices and the impact on youth vaping are not yet distant memories, and are a reminder of how powerful product design can be in influencing consumer trial. Globally, tobacco companies have now largely abandoned cig-a-like and tank-system vaping products as they shifted to JUUL-style devices -- think BAT's ePOD, Japan Tobacco's Logic Compact and PMI's VEEV.

It may be that JUUL is yesterday's fad. Recently, disposable vaping products have emerged as the product with increased use by young people. In some cases, the increase is very dramatic: data from the U.K. released this week showed that one-half of young e-cigarette users had chosen a disposable device -- up from less than one-tenth only last year.

PMI is the first tobacco tobacco company to jump on this trend, but is unlikely to be the last.

Why Canada is first.

At this point, it appears that Canada is the only country in which VEEBA is currently being marketed. PMI may well be using Canada as the test market for this new product.

Canada has been identified as one of the largest vaping markets, but there are other reasons why PMI is able to market VEEBA here before it can reach other markets. Canada does not have the regulatory and administrative barriers to market entry that exist elsewhere:

Stalled regulatory responses
Affordability is only one reason that young people find disposable vapes attractive. Their small size makes them easily concealable -- and the fact they are thrown out after use further reduces the risk of being caught by parents and diminishes the impact of having products confiscated by school authorities.
Because these products are particularly attractive to youth, some health regulators have taken steps to remove them from the market. In 2021, Belgium proposed a ban on disposable vaping products, on the basis of a now-repeated recommendation of that country's Conseil Superier de la Sante. However, trade-related concerns expressed within the EU appear to have stalled this regulatory initiative.

The United States has begun enforcing its requirements that vaping products by authorized by the FDA. Last year, for example, it directed manufacturers of disposables to remove their products from the market, although the products remain on the market as this enforcement action develops.

Last year, Health Canada stated its intention to move forward with regulations to control youth-friendly product designs. Under consideration were "Regulations Amending the Vaping Products Promotion Regulations (Package and Design Features)" which would be designed with the purpose "to protect young persons and non-users of tobacco products from inducements to use vaping products. The proposed regulations would ... impose restrictions on design features that are appealing to youth to prevent their use in the manufacture of vaping products." The department subsequently stepped back from that intention, however, and did not include it on the regulatory workplan circulated this spring.

No guarantee of success

The market launch of a new vaping device is no guarantee of success for PMI or any other tobacco company. In the four years since vaping products were legalized in Canada, three other multinational tobacco companies have tried to succeed in this market, and two of them have failed:

* Japan Tobacco introduced its Logic Compact in early 2019, but took it off the market less than 24 months later. It no longer sells vaping products in Canada.

The third company, BAT, was not successful with its first product launches. In May 2018, its initial productws were the eTank (refillable) and eStick (cig-a-like). In September 2018, BAT introduced the ePEN, which looked like a JUUL product but did not work with high-nicotine liquids. In early 2019 the ePOD with its capacity to aerosolize higher concentration nicotine salts was launched. By the end of 2020, only the ePOD remained on the market. 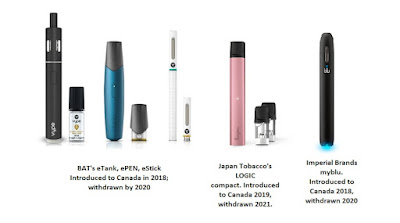 Posted by Cynthia Callard at 08:56