Are we prepared for an e-cigarette price war?

CNBC reported today that the price war among vaping companies in the United States is driving the cost of experimenting with nicotine to below the cost of a candy bar. Some starter kits can be bought for as little as US$0.99.

"Late last year, NJOY started selling its Ace e-cigarettes for 99 cents in stores, compared with the $7.99 it currently charges online." (Pictured below is one such offer from a US web-retailer). 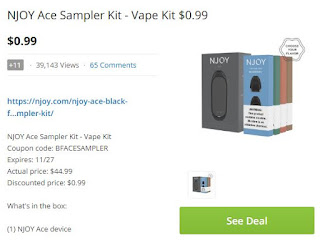 The price war among vaping companies in Canada as not yet hit that level, although, as reported here earlier this summer, it has resulted in the price of  major vaping devices being cut in half in only 6 months. Thankfully they are not (at least yet!) at the levels observed in the USA.

It  could be only a matter of time before the companies launch a full-scale price war in Canada. If so, there is little sign that governments will be able to prevent young people from becoming collateral damage.

What could they be doing?  I'm glad you asked.

* Health ministries could prepare to amend tobacco and vaping laws in order to give themselves regulatory authority over promotional prices. Many of these laws already have some form of restraint on using price to induce young users -- measures like minimum package sizes and bans on certain discounts. But for the most part, price promotions for tobacco products (including vaping) are currently exempted. Filling this loop hole is more important than ever.

* the federal department of Innovation, Science and Economic Development (formerly Industry Canada) could prepare to undo the damage it imposed in 2009, when it  amended the Competition Act in the infamous omnibus budget bill of 2009. Before then, manufacturers could not set discriminatory wholesale prices between retailers. By re-inserting restrictions on wholesale price discounting for harmful products like tobacco and nicotine, this department could end the localized pricing practices that are undermining tobacco tax policies and stop them from expanding into nicotine.

* finance ministries can be exploring optimum tax policies for e-cigarettes. The World Bank has scoped out the use of taxes to discourage young people from vaping, and several U.S. states and other countries have already put e-cigarette taxes into effect. (Pictured below is the impact that US state-level taxes would have on a package of cartridge in Canada). 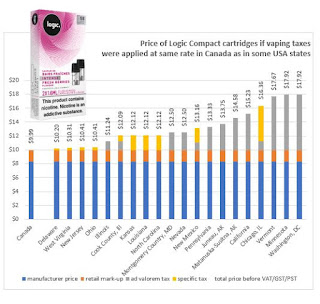 The importance of tax and price policies to reduce tobacco use has been recognized for several decades- and is a cornerstone of the Framework Convention on Tobacco Control.

How many more children need to be addicted before this tool is taken out of the shed?

Posted by Cynthia Callard at 11:16