Visualizing the gains since 2000

I spent my coffee break this morning playing with the *awesome* visualization tools made available courtesy of ourworldindata.org based on data provided by the World Health Organization.

Enormous strides have been made over the past decade in standardizing health indicators and in making data available for analysis in ways previously unimaginable. Our thanks to those who have invested in this important work.

For reasons never made clear, Canadian health authorities have rarely age-standardized smoking rates. Most people start smoking when they are young and a proportion of them quit as they age - so it doesn't make sense to compare the smoking rates of a relatively young population (say Africa or Canada in the 1960s) with those of a relatively old population (say Japan or Canada in 2017!).

Because WHO age standardizes smoking rates in its Global Health Observatory repository, we can compare Canada's progress with other countries with a little more confidence.

The charts below suggest that: 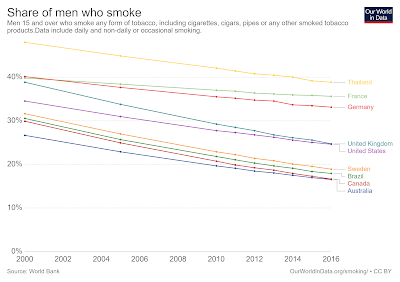 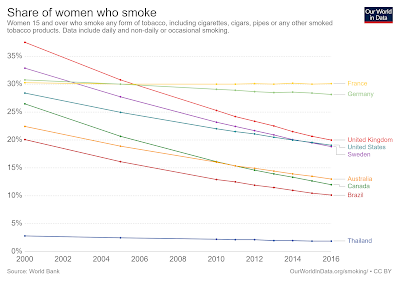 Posted by Cynthia Callard at 07:12