This increase was not the result of a budgetary decision this year, but because of an automatic quinquennial inflation adjustment introduced in the 2014 budget, and annualized in the 2018 budget. If there had been a plan to include an additional tax increase in this year's budget, once scheduled for this past Monday, it too was disrupted by the COVID-19 suspension of Parliament.

Cigarettes are more expensive this year than last for other reasons. Provincial governments have nudged cigarette taxes forward over the past year. In February, Nova Scotia raised taxes by $4 per carton, as British Columbia had  done in January. Alberta raised taxes in October by $5.00 per carton.  To offset its cuts to the PST, Manitoba increased taxes by $1 per carton last May (2019), and has announced that it will do so again this coming July. Meanwhile, tobacco companies have also increased the price of tobacco products. In 2019, the average wholesale price of a cigarette, as reported by Health Canada, was $3.50 per pack, up 50% from $2.35 a pack in 2015 and double the average wholesale cost ten years ago ($1.70).

These price increases do not, however, change the overall picture. Canadians pay less for cigarettes than do citizens of most other developed countries as the populous provinces of Ontario and Quebec are those with the lowest taxes. A package which sells for over $14 in Nova Scotia (which has the hghest combined taxes) will cost less than $10 in Quebec (which has the lowest). 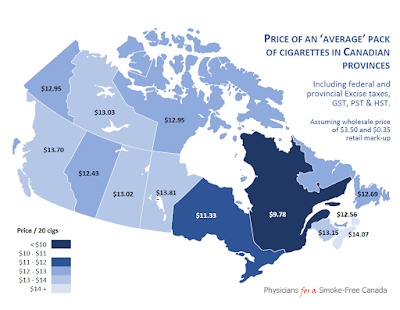 Both business and health analysts group Canada as one of the countries where cigarette are more affordable. In a presentation to investors last year, the largest US tobacco company, Altria, illustrated that the USA was one of the most affordable cigarette markets -- but Canada was not far behind. 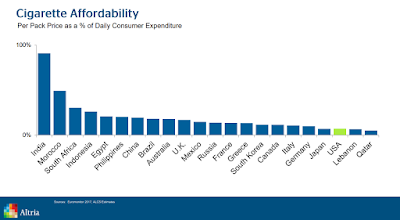 The World Health Organization, in its 7th WHO report on the Global Tobacco Epidemic, collected data from July 2018 on taxes applied to cigarettes and othe rproducts and also on the retail prices charged.  It found that Canada is among the 5 OECD countries with the lowest tax proportion of price (at 64% of package price, less than the recommended 75%). 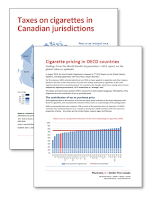