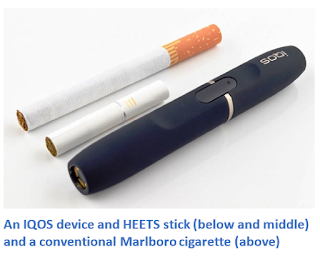 This post has been corrected. As part of its COVID-19 response, British Columbia has indefinitely postponed its tax changes for these products.

These modern tobacco products were introduced to the Canadian marketplace in late 2016 by Rothmans, Benson and Hedges (RBH) under the brand names IQOS (device) and HEETs (tobacco sticks).  British American Tobacco introduced its similar ”i-glo”/”glo” product in some parts of Canada in 2017, but withdrew it in 2019. Japan Tobacco International manufactures a heat not burn device (PLOOM), but does appear to sell it in Canada.

Because HNB products are not “smoked”, they not considered cigarettes under tobacco tax law. Only one province (British Columbia) has established a tax category for these tobacco products. This would have had the effect of more than doubling the taxes on these products, but was postponed indefinitely on date of implementation. As a result, all provinces and the federal government currently classify these products under the same tax category that is used for chewing or pipe tobacco.

For most provinces, this means HNB tobacco products are taxed for each gram of weight. The federal government, however, taxes this category of tobacco on the basis of 50 grams of weight "or fraction of 50 grams".  This larger measure was introduced in the 2008 federal budget as a way of preventing the marketing of “kiddy packs” of smokeless tobacco. The federal tax (currently set at $7.76 for every 50 grams or fraction thereof) thus functions as a minimum price for all products which fall into the “manufactured tobacco” category. 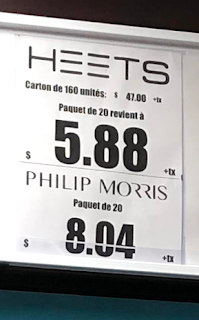 RBH has responded to this unusual structure in tobacco law by selling its HEET sticks only in cartons or bundled packages. The two package sizes it uses are a carton of 160 sticks (containing 8 ‘sub-units’ of 20 sticks each) and a bundle of 50 sticks (packaged in 5 'sub-units' of 10 sticks each). (It has also lobbied the federal government to change the rules).

What does this mean for public health?

The federal tax structure creates an incentive for manufacturers to set a large minimum package size for heat-not-burn products, although it does not force them to do so.

Although the minimum price for HNB products is higher than for tobacco (which are sold in minimum package sizes of 20), the per-unit cost is lower. HNB sticks are much less expensive than regular cigarettes. 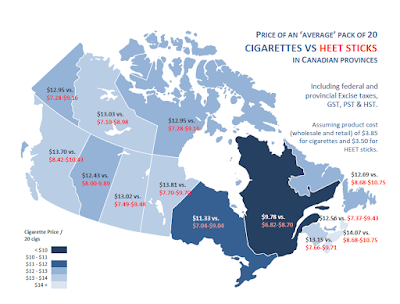 This information is also available in a downloadable Fact Sheet.

Posted by Cynthia Callard at 09:31