Another look at quitting rates: Insights from the Canadian Community Health Survey

Shortly after Statistics Canada released data from the 2017-2018 Canadian Community Health Survey (CCHS), we reported on the relatively small contribution of quitting to the progress against tobacco use, focusing on population growth and turn-over (deaths) over the past decade.

This post takes a second look at changes in quitting behaviour over the past 20 years for Canadian men and women at different stages of life. It identifies some of the challenges in using quitting rates or quit ratios as indicators for tobacco control.

The percentage of Canadians who are former smokers has barely changed since the beginning of the century....

Although the proportion of Canadians who smoke has fallen from one-quarter (26%) in 2000 to one-sixth (16%) in 2018, the share of the population who are former smokers has barely budged - hovering around 25%. As discussed earlier this summer, and shown below it is the growth in "never smokers" that has driven overall smoking rates down.

Between 2000 and 20018, the number of smokers fell by 1.7 million, but the number of former smokers grew by only 1.2 million. The number of people who had never smoked one cigarette grew by 5 million. 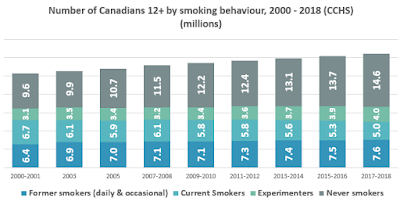 But among Canadian who have ever smoked, a greater proportion have quit

Looking at the number of Canadians who have quit smoking as a proportion of those who have ever smoked shows that there has been overall growth in quitting.

Success in quitting comes with age...

Although virtually all smokers start before they are in their early 20s, successful quitting happens at all ages and accumulates as people age. This is illustrated in the chart below, which shows the percentage of ever smokers who have quit in 5 age groups over 2000 to 2018, the years of available CCHS data.

The proportion of former smokers is particularly high for those over 65, in part because of the early death of smokers.  Those in the numerator live longer than those in the denominator!  (The median age of dying of a tobacco-related disease is in the early 70s.)

... which means an aging population will have more successful quitters

When talking about smoking, we frequently divide Canadians into three groups: those who smoke on a daily or occasional basis ('current smokers'), those who used smoke but who don't any more ('former smokers') and those who have never smoked ('never smokers'). The CCHS is such a large survey (around 100,000 respondents) that it allows for more distinctions to be made:

Excel files for the tables presented above:
Previously released Excel tables:
Posted by Cynthia Callard at 05:17