About the PATH survey

In May 2020, we reported on a number of studies that analyzed data from the PATH survey. To recap, since 2013, there has been a remarkable survey operating in the United States that has deepened our understanding of tobacco and e-cigarettes use and consequences. It is the Population Assessment of Tobacco and Health Survey (PATH) - a longitudinal, nationally representative survey of 46000 Americans. This survey generates information on tobacco and e-cigarette use behaviours, and with its longitudinal design it interviews the same individuals every year. It is planned that the survey will continue at least until 2024.

Since May, more longitudinal analyses have been published using PATH survey data. Three of these explore the relationship between smoking cessation and e-cigarette use and merit a closer look.

The first of these was published by Rufeng Chen and colleagues in June 2020. They followed a subsample of 2,535 people who were smokers in 2014-15, and who had tried at least once to quit smoking by 2015-16. Their success at quitting smoking was assessed at 2016-17. They found that, among those who used e-cigarettes to help them quit, about 13% were successful. However, this success rate was not significantly different from that achieved by smokers who used other methods to quit smoking. Importantly, two-thirds of successful quitters who used e-cigarettes were still using e-cigarettes by the time of the 2016-17 PATH survey. The authors conclude:

These results suggest e-cigarettes may not be an effective cessation aid for adult smokers and, instead, may contribute to continuing nicotine dependence.

August 2020:
Another PATH study finds quitting is no more likely with e-cigarettes.

We found no evidence to support our first hypothesis that ENDS [electronic nicotine delivery systems] would be associated with increased abstinence duration from either cigarette or any tobacco. Twelve-month cigarette abstinence was ~10% and comparable across all methods used to quit, and the finding was robust to sensitivity analyses. Over half of those who used e-cigarettes to try to quit were still using e-cigarettes at the W3 follow-up.

Similarly our results did not support our second hypothesis that daily use of ENDS would be associated with increased cigarette abstinence.

This study suggests that consistent and frequent e-cigarette use over time is associated with cigarette smoking cessation among adults in the US.

At first blush, this conclusion seems at odds with the previous PATH studies, but closer inspection shows the results are the same.

One might ask how many e-cigarette users who were trying to quit smoking successfully quit both smoking and e-cigarette use by the end of the study period in 2016? Glasser and colleagues do not provide that datum. However, Pierce and colleagues who analyzed the same PATH data sets over the same time period do provide the information. Here is the answer

In other words, not a single e-cigarette user who was using e-cigarettes to quit was able to quit both combustible cigarette and e-cigarettes after three years.

In general, the PATH analyses show that, at the population level, e-cigarettes are not helpful in smoking cessation and even e-cigarette users who successfully quit smoking will still be addicted to nicotine in their e-cigarettes.

Would the same findings be true in Canada?

There is no ongoing longitudinal monitoring of nicotine use behaviour in Canada that is comparable to the US PATH survey for detail, size and quality. Nevertheless there is some Canadian information available that does offer some limited comparison.
Health Canada has commissioned a return-to-sample (semi-longitudinal) survey of Canadian vapers. Despite its limitations (non-representative sample, 25% response rate at T2, 992 usable responses), this survey has the merit of following the vaping behaviour of the same group of vapers over a one-year period, from 2019 to 2020. The report found that although 11% of vapers had smoked in 2019 but quit using cigarettes by 2020, a larger number (13%) were non-smokers in 2019 but in 2020 were smoking cigarettes.
In other words, the modest amount of quitting behaviour among vapers was more than offset by uptake of smoking in the same population. And one-half of vapers who had never smoked cigarettes at the beginning of the survey were doing so one year later.
So far, the Canadian evidence, like that in the USA, does not support the conclusion that vaping is an effective population-based smoking cessation method. 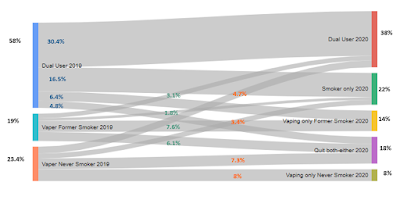 Data from Environics Canada.
Vapers Online Survey to Measure Attitudes and Behaviours
Regarding Vaping Over Time (2019 to 2020).
POR 098-19.