Today, Statistics Canada released the results of its second annual survey on tobacco and vaping. The Canadian Tobacco and Nicotine Survey (CTNS) was first conducted in the fall of 2019, and was repeated in December 2020-January 2021.

The rate of youth vaping does not appear to be increasing. In the year between survey waves, roughly the same number of teenagers (age 15-19) and young adults (age 20 to 24) had vaped in the past 30 days.

With the small sample size of this survey, it may not be possible to say that the slight year-over-year decrease (from 15% to 13%-14%) reaches statistical significance, but we can say with confidence that the number has not grown.

The rates of cigarette use continue to fall, with a statistically significant drop in cigarette smoking in all age groups. (Important to note that the CTNS is part of a family of smoking surveys that produce lower estimates of smoking than Statistics Canada's larger Canadian Community Health Survey).

A lot happened in the 12 months between survey waves: not only were provincial and federal restrictions on vaping marketing put in place, but the social world of young people was disrupted by the COVID pandemic restrictions. For whatever reason, this curve appears to be flattening. 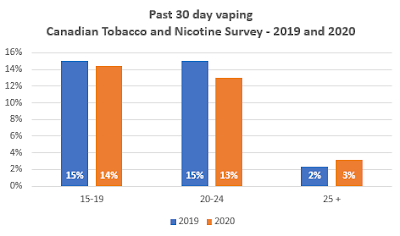 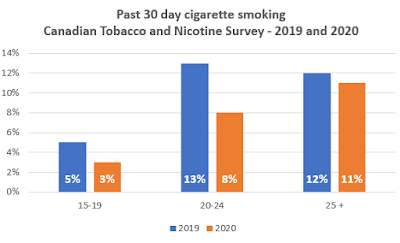 The rate of nicotine use continues to be high. This survey confirms that one in seven teenager and young adults (14% and 13% respectively) is vaping, and that one-third of high-school age kids have tried nicotine. These numbers underestimate the problem, as they include the younger ages (15 and 16). Larger surveys of Canadian youth allow a closer look at each grade, and show that the child who enters high school in grade 9 as likely as not to have tried vaping before graduating.

Results from this wave of the CTNS suggest that vaping may be increasing the long decline in cigarette use, but that the cost of this is higher overall nicotine use in this next generation. If so, this is an outcome that was recently documented in the United States.

Continuing declines in adolescent smoking of combustible cigarettes are not guaranteed.  Research shows that young e-cigarette users are 3-4 times more likely to become cigarette smokers than adolescent non-users of nicotine.

E-cigarettes have increased the number of American teenagers hooked on nicotine.

That is the key finding of a new study by MeLisa Creamer and colleagues [1] that analyzed data from the US National Youth Tobacco Survey, conducted annually from 2004 to 2018 among a representative sample of US middle school and high school students.  While cigarette use declined, e-cigarette use increased markedly. The net effect was more nicotine users in high schools.  This was true both for ever use and current use of nicotine, as shown in the graphs below. By 2019, 15% of American high school students were current nicotine users.

Posted by Cynthia Callard at 07:22