The season for government budgets has come to an end. After a disappointing start, it ended with a strong finish for tobacco control. The first 11 provincial budgets presented this year contained no mention of tobacco. But the most recent 3 budgets (Saskatchewan, the federal government and British Columbia) included measures to address smoking and youth vaping.

On April 9, Saskatchewan announced that it would create new taxes for heat-not-burn (effective June 1, 2021) and vaping products (effective September 1, 2021). This week, the federal budget introduced immediate increases to all tobacco taxes by the equivalent of $4 per carton of cigarettes and set a path for a new tax on vaping liquids to come on line in 2022. The next day, British Columbia announced an even larger increase in cigarette taxes ($6 per carton), as well as similar increases for heat-not-burn, roll-your-own and oral tobacco, to come into effect on July 1, 2021.
B.C. is on track to have the highest cigarette taxes in Canada this summer, narrowly overtaking Nova Scotia, Manitoba and Newfoundland. A typical pack of cigarettes will cost almost $15 in British Columbia, compared with only $10 in Quebec. (The prices shown below assume a $3.50 wholesale price, and a $0.35 retail mark-up). 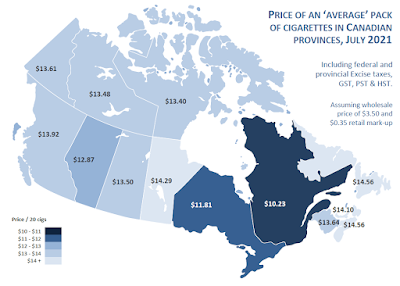 Finance Canada's Tax Innovations
The vaping tax that will be established through the federal budget continues a highly-successful innovation first used by Finance Canada for the broad category of manufactured tobacco (essentially all tobacco products other than cigarettes, cigarette sticks and cigars). The federal tax for manufactured tobacco is set at a rate of $9.09 for every 50 grams or portion thereof and the vaping liquid tax will be taxed at $1 for every 10 ml of liquid or portion thereof.  This use of a minimum tax quantity makes small packages of these products relatively expensive, and effectively sets a minimum price for these categories of products.
As the federal budget documents explain, this approach is expected to put a higher relative tax on the pods that are associated with young users. "To illustrate, if a retail package contains four separate pods of 1.0 ml of vaping liquid, each pod would be considered a separate container for the purpose of the duty. The duty would be calculated based on the volume of liquid in each separate pod (i.e., $1.00 per pod, for a total of $4.00 for the retail package), and not on the total volume of liquid in the package. Larger volumes of liquids, a 30 ml container for example, would be subject to excise duties of $3.00, while a 100 ml container would bear an excise duty burden of $10.00."
Not unexpectedly, there have been complaints from manufacturers of oral tobacco and heated tobacco products about the minimum quantity for federal taxes on manufactured tobacco. In Finance Canada's consultation on the new vaping product tax, simlar complaints can be anticipated from the manufacturers of vaping pods. This is also an opportunity for Canadians to remind federal finance officials of their support for measures to protect young people from becoming addicted to tobacco and nicotine products.
A heterogenous tax system 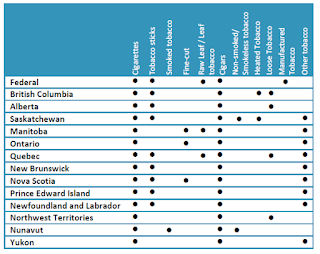 Taxes on tobacco products vary widely among Canada's provinces, and also among the types of products that are sold. There is not even a consistent approach to categorizing the types of tobacco subject to excise tax. Two provinces (British Columbia and Saskatchewan) have established new categories for heat-not-burn tobacco, for example, while most continue to tax them as "other" or "loose" tobacco at the same per-gram tax as pipe tobacco or oral tobacco.
The result is a very uneven application of tax on tobacco products when considered on a per-use basis. More tax is charged on oral tobacco and less is charged for heated tobacco in all provinces. For example, a one-gram pouch of oral tobacco sold in a 34-gram tin in British Columbia will carry 92 cents in combined federal and provincial specific tobacco taxes this summer, compared with 38 cents for one stick of heat-not-burn tobacco or 47 cents for a cigarette. The same pouch of oral tobacco has half as much tax when sold in Ontario (45 cents), and the cigarette sold in Quebec has one-third less tax (29 cents). 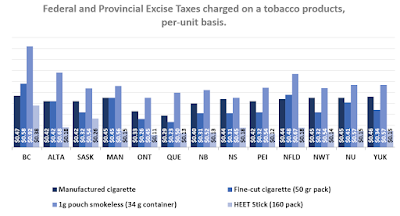 Tobacco companies adjust their pricing policies to tax changes
Within a hairs' breadth of the federal taxes being announced, cigarette manufacturers informed retailers that they would be immediately adding 80 cents to the price of each carton of cigarettes. This long-standing practice of concurrent price and tax increases is good for tobacco shareholders, as it allows them to recoup the money they would otherwise lose when smokers quit or cut down as a result of the tax increase. But it is also good for public health: Canadian economists have repeatedly demonstrated that the higher the price of tobacco, the less that is used.
Another adjustment that the companies are likely to make is bad for public health. They over- and under-shift taxes on different products and reduce the price of their discount brands while making up any losses by increasing the price of their up-scale products. Their ability to do this blunts the health benefits of tobacco taxes. (This is one of many reasons that calls are growing for restrictions on promotional pricing of tobacco).
Briefing notes and fact sheets:
* Briefing note: Tobacco and Vaping Tax Measures
* Fact sheet:  Tax and Price Elasticity of Tobacco Products in Canada
Posted by Cynthia Callard at 09:01