Tobacco control innovations in 3 other countries

Earlier this year we reported on the results of the Commonwealth Fund Survey of health behaviours in 11 countries with comparable government structures, economies and cultures. According to the results of this survey, which considered all forms of tobacco use (and not just cigarette smoking), Canada did fairly well. We are ranked fourth, behind New Zealand, Australia and the United States. Other global data sets, such as that prepared by the OECD, consider only daily cigarette smoking only. By this other measure, Canada would also rank 4th, but would be behind Norway, Sweden and the United States.) 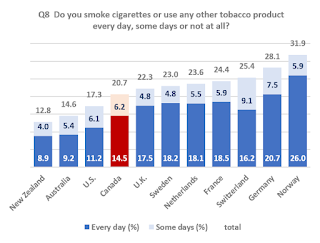 Comparing smoking rates among countries that share cultural, political and commercial practices can help inform discussions about tobacco regulation. These 11 peer-group nations have all adopted comprehensive measures to reduce tobacco use, and many are planning additional public measures. There are both small and large differences in the approaches each have taken: In the United States, for example, cigarettes are still displayed in corner stores and do not yet have picture-based warnings. In Australia, vaping products and oral tobacco are not legal for commercial sale. In France, cigarettes may only be sold by stores which are part of a state-controlled retail monopoly.

This post looks at tobacco control measures that have recently been proposed in three of these countries, and how they compare with the situation in Canada.

Ten years ago New Zealand adopted the goal of becoming smoke-free by 2025, which was interpreted as achieving less than 5% prevalence. That deadline is now only a few years way, and the government has been under pressure to up its game to make that goal a reality. Last week the New Zealand associate Health Minister, Dr. Ayesha Verrall, opened consultations on a new Action Plan for tobacco that is designed to meet this goal.

In presenting a broad set of new measures, the minister was frank that the government needed to do more things and that it needed to do things differently.  "To accelerate progress towards Smokefree 2025, we must change how we tackle smoking. We will not achieve it with a business-as-usual approach."
In many respects, the tobacco control situations in New Zealand and Canada are very similar. Both countries are among a small group of nations which have liberalized the vaping market as a harm reduction approach. Both countries face similar challenges with respect to the way tobacco drives health inequalities and causes disproportionate harm to indigenous peoples. Both countries share political and many cultural traditions.
How does this compare with Canada? Dr. Verrall's plan goes well beyond the current strategies of federal and provincial governments. Of her 15 newly-proposed measures, for example, only three are currently included in Canada's Tobacco Strategy, as indicated with an "*" in the list below.

2. Sweden: Moving beyond tobacco and aiming to reduce all forms of nicotine use

In March, the Swedish Minister of Social Affairs, Lena Hallengren, presented her legislature with a new strategy to address alcohol, drugs, gambling, tobacco and nicotine. One of the key developments in the new strategy is "extending tobacco to also include nicotine products" [free translation].
Sweden's decision to reduce nicotine use is significant given that it is often held up by outsiders (and the tobacco industry) as a model for a harm reduction approach which discourages smoking but which does not discourage nicotine use. Although rates of all tobacco use in Sweden are high, much of the tobacco used is in the form of snus and cigarette smoking rates are lower than in other European countries.
The Swedish decision to target the use of nicotine was not taken lightly. Last year an expert report was commissioned to review the evidence and make recommendations to government. The 500 pages report, Hårdare regler för nya nikotinprodukter (Stricter rules for new nicotine products) was made public last month. The experts involved in the review considered the expanding range of novel nicotine products, the way these p;roducts attracted young users and the gaps in Sweden's current laws. They recommended that Sweden should aim to limit all use of nicotine, should ban all flavourings other than tobacco flavour in vaping liquids and should put all tobacco-free nicotine products under a similar regulatory frame as tobacco.
Sweden's legislature is now reviewing these proposals and is expected to vote on them at the end of the spring.
How does this compare with Canada?  Sweden is adopting a policy scope that is broader than that in place in Canada. Although our federal government adopted the goal of reducing tobacco use to less than 5% of the population by 2035, it has not stated an intention to reduce overall nicotine use or set any public health goals for vaping rates for adults. The 5% objective is a policy without any legislative basis, and the government opposed a legislated mandate when it was proposed by opposition members of parliament in 2018.

For the past few years, the Netherlands' approach to tobacco regulation has been guided by the National Prevention Agreement endorsed by the government and more than 70 civil society organizations. This development has spurred the implementation of a number of measures already in place in Canada, including smoke-free spaces, retail display bans and plain packaging. It is also the basis of further restrictions on e-cigarettes: it is currently developing restrictions on flavourings in vaping liquids.
The Dutch government is also planning a major reform in the way tobacco products are supplied.  Last fall, secretary of state Paul Blokhuis informed his legislative colleagues that after reviewing economic studies and consulting with stakeholders, he was moving to remove tobacco from all but specialist stores.  "To prevent young people from smoking and to protect ex-smokers, the government has opted to limit the sale of tobacco and related products to sales channels that usually do not attract children and ex-smokers. In time, these products will only be sold at specialist tobacco shops where only adult smokers come and which focus almost exclusively on the sale of tobacco and related products."
This change will be phased-in over the next decade. The first ban on vending machines will take place in 2022, with on-line sales removed the following year. In 2024, sales will be banned in supermarkets, and in 2030 the remaining restrictions will be imposed.
How does this compare with Canada?  Over the past decades, provincial governments have adopted regulations that forbid the same of tobacco in some venues (like schools or pharmacies) or which make them less likely to happen (like banning smoking in bars). This and other developments have had the effect of reducing the number of tobacco retailers in Canada from 90,000 in the 1970s to under 30,000 today. No government has set a goal to reduce retail density, as the Netherlands and New Zealand are now doing. (One other European country has limited cigarette and vaping products to adult-only store. In 2013, Hungary asserted control over tobacco retailing and reduced the number of retail outlets to fewer than 20% of the 42,000 retailers that had been in place.) 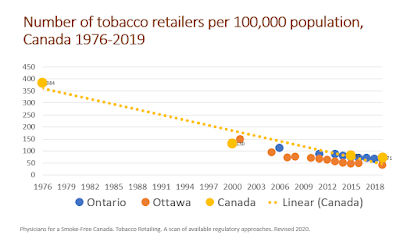 In a recent presentation to Canadians about developments in the Netherlands, Dr. Marc Willemsen identified other elements that are not currently in place in Canada. The current proposals result from a deliberate campaign to develop a national consensus on priorities and to broaden support across government and civil society for additional reforms. Canada formerly had a National Strategy to Reduce Tobacco Use, which resulted from interprovincial agreements among provinces and civil society organizations. The intersectoral committee that oversaw this strategy was disbanded in the early 2000s and soon after separate federal and provincial tobacco control strategies were established. There is currently no Canadian equivalent to the Netherlands' National Prevention Agreement.
(Dr. Willemsen's slides from this webinar can be viewed here, and his downloadable book "Tobacco Control Policy in the Netherlands"  details the development of this strategy.)
Posted by Cynthia Callard at 05:39