Last week two countries advanced major reforms to regulatory controls on the vaping market. On April 13th, Finland finalized changes to its Tobacco Act, a day after China finalized its first regulatory standard for e-cigarettes. This post describes some of the measures these governments are putting in place.

In just over a year, on May 1, 2023, all brand images and logos will be prohibited on vaping product packaging in Finland, and the health ministry says that more controls will be made by regulation ( "separate provisions on the technical details related to the layout of packages and products will be issued by a decree.")
Finland is also imposing restrictions on the shape of vaping liquid containers ("The refill container must not differ from other refill containers in shape, color, surface, color of the label or other appearance, and the appearance of the refill container must not promote the sale of the product.")

Israel was the first country to require plain packaging of vaping products, implementing the measure in early 2020. Denmark passed legislation later that year, which comes into force this October. (The Netherlands has initiated legislation which is not yet finalized).

These are measures that are not currently in development in Canada. Although Health Canada's Forward Regulatory Plan that was released this time last year indicated regulations were being developed to "place certain limits on what promotional elements can appear on vaping product packages", this initiative was dropped in this year's Departmental Plan.

There are other measures that Finland has put in place which are not yet established in Canada. These include:

Although the e-cigarette is widely accepted as a Chinese innovation, it is only recently that the Chinese government has brought the e-cigarette market under public authority. Last November e-cigarettes were brought under the control of China's state tobacco monopoly. Soon afterwards consultations were launched to inform the development of the rules that would be imposed on this newly-regulated industry. Draft regulations were circulated at the World Trade Organization in early December, with a second consultation initiated in March. The final version (GB 41700-2022) was adopted on April 8 and comes into force on October 1, 2022. (The formal version is not yet downloadable, but photocopies are circulating on the web).

China is adopting some product standards that are already in place in many other countries. These include:

It is also introducing measures that are less common elsewhere, including:
To implement some of these requirements (such as maximum nicotine release per puff and maximum temperatures), Chinese authorities have established testing protocols and standards, which are included by reference or as appendices to the new standard.

Although many countries have prohibited the use of certain categories of additives, such as colouring agents or reproductive toxins, only a few have moved towards prohibiting all additives other than those which are specifically permitted for us.

Health Canada is a proponent of this approach. In its proposed flavour restrictions, published 10 months ago, it identified 82 exempted flavouring additives (40 for tobacco-flavours, and 42 for menthol-mint flavours) and proposed to prohibit all others. The Netherlands National Institute for Public Health and the Environment (RIVM) also promoted this approach, and proposed a list of 23 flavouring additives that could be approved for use as part of its proposed ban on all non-tobacco flavours. The "White List" in China's regulation (currently accessible in the draft version of the regulation) includes 101 chemicals. There is only a modest overlap in these lists: of the 182 chemicals identified in these lists, only 22 are identified by more than one country. (A combined list can be accessed here). 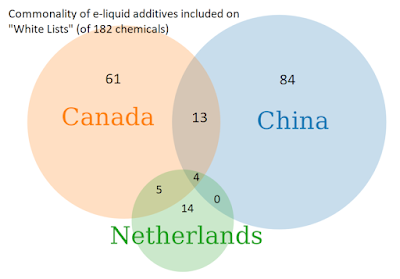 With its October 1, 2023 implementation date, it appears likely that China will be the first to implement a flavouring ingredient "white list".  The Netherlands has indicating that its flavour restrictions are delayed until at least January 2023 and Health Canada has not made public its implementation timeline.

A first ban on open systems and emission rates

Last  year, in its 8th report to the World Health Organization, the WHO study group on tobacco product regulation (TOBReg) recommended that governments should prohibit e-cigarettes "in which the user can control device features and liquid ingredients (that is, open systems)" and those "with a higher abuse liability than conventional cigarettes, for example by restricting the emission rate or flux of nicotine." China appears to be the first country to put such restrictins into effect.

Posted by Cynthia Callard at 05:08