Although e-cigarettes are more and more frequently seen on Canadian streets, from a policy-setting point of view, they seem to have dropped from view.
A policy void that has lasted 6 years - even in defiance of parliamentary directives.

The sale of electronic cigarettes which contain nicotine is not legal in Canada. This was made clear by the government in an advisory issued in March 2009.

Whether or not this is a good policy is a question of debate, although the debate in Canada has been less vigorous and more civil than in other quarters. (Our own position in favour of tying increased e-cigarette use to decreasing use of combustibles was forwarded earlier this year.)

Provincial governments grew antsy with the lack of federal action, and pushed the Minister of Health for action during their annual meeting in the autumn of 2014. Her response was to punt the issue to a parliamentary committee for review.

The Standing Committee of the House of Commons began its review with an appearance by Health Canada officials almost exactly a year ago. Their appearance was a masterful display of the skill of saying nothing. Sadly, the much greater talents of the individuals involved in developing solid regulatory responses to health threats was not allowed to be shown. Another example of the muzzling of scientists, perhaps.

On March 10th, the Standing Committee on Health presented its report Vaping: toward a regulatory framework for cigarettes, and requested that the government respond to its 14 recommendations within the 120 days as required by the House Standing Orders.


109.  Within 120 days of the presentation of a report from a standing or special committee, the government shall, upon the request of the committee, table a comprehensive response thereto, and when such a response has been requested, no motion for the concurrence in the report may be proposed until the comprehensive response has been tabled or the expiration of the said period of 120 days.

The deadline set by this requirement was after the House had risen for the summer and the current parliament had effectively been dissolved. Nonetheless, the parliamentary requirement for a response was valid, and the Ministry should have tabled a response on July 21st, the date set for 'adjournment tabling.'

Health Canada officials would almost certainly have prepared a response for this date, as the decision to act in contempt of a parliamentary requirement is (hopefully) not one that would be taken lightly within government departments.

Nonetheless, the government's response to the committee's strong desire for regulations was never tabled.

A policy void that has lead to a vibrant illegal market

There are three large markets for illegal inhalable products in Canada:

The open marketing of marijuana and e-cigarettes is made possible by enforcement decisions of Health Canada and others to effectively turn a blind eye. Letters may be sent. Threats may be made. But no one shuts the storefronts down.

A policy void that is not in tobacco industry's interests 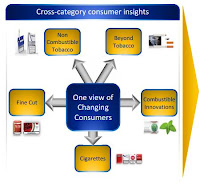 All of the multinational tobacco companies are scrambling to develop next generation products. In their view, there is no one e-cigarette, but rather a suite of innovations and "next generation products".  BAT has provided a most illuminating review of its understanding of e-cigarettes as one part of a new product portfolio in a recent investor presentations its marketing strategy.

The Canadian market for "next generation products" is blocked for companies which want to be seen to be operating within the law and which need large (legal) distribution and marketing channels.

For this, they need Health Canada to legitimize (instead of ignore) the e-cigarette market.

Not surprising, then, that one of their operational objectives is to be the ones who define the new regulatory framework. Or, as they put it to investors "lead the formalisation of NGPs (next generation products)". 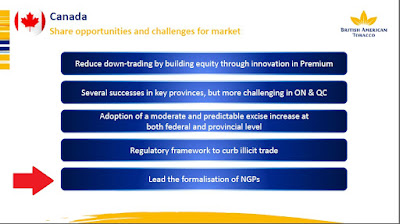 Election 2015: The Party Platforms on Tobacco 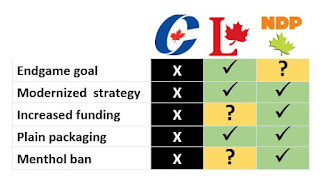 Of the forty-two generation elections that have been held in Canada, tobacco has rarely been included among the electoral commitments of the political parties who vie for voter support.

The 2015 federal election, which will culminate in a vote on Monday October 19, is a notable exception.* Of the 3 leading national parties, two have made specific commitments to implement tobacco control policies in their official platforms.

The Liberal Party of Canada (LPC) was the first platform released (on October 5). In it, the party said it "will introduce plain packaging requirements for tobacco products, similar to those in Australia and the United Kingdom." (Liberal Platform, page 21)

Later that week, on October 9th, the two other parties released theirs:
Neither of the two prominent minor parties - the Green Party and the Bloc Quebecois - made reference to tobacco in their campaign literature.

Additional commitments had been sought of the three main parties by two civil society groups prior to the release of the platform.  Among these were requests for the party to:
The Conservative Party did not respond to either request.

The Liberal Party said it supported a target of less than 5% smoking prevalence by 2035. It reaffirmed its commitment to plain packaging, said it would examine ways to enhance and modernize tobacco controls laws. It made no commitment to additional funding, but said it would review the approach of a license fee as part of a renewal process. It expressed support for provincial laws which ban menthol, but cautioned that a review of whether further action was needed would be required before changes to federal law would be implemented.

The NDP did not agree to an endgame, but said it would "implement measures to markedly reduce tobacco use across the country." It did agree to a comprehensive review and a consultations towards a "dynamic" new federal strategy. It made a specific commitment to $10 million per year funding, and said it would consider a license fee. It agreed to plain packaging and to continue its previous position of banning menthol in cigarettes.

* In September 2008, the Conservative Party promised to ban flavouring in tobacco. The Cracking down on tobacco marketing aimed at Youth Act", passed in 2009 after their election victory, was the fulfillment of that promise.

Posted by Cynthia Callard at 17:01