World No Tobacco Day 2018: The endgame is not in sight

Today was a very busy day on the communications front of the battle against tobacco use in Canada. Federal Health Minister, the Hon. Ginette Petitpas-Taylor appeared before delegates to the 2018 tobacco conference in Montreal to outline the next 5-year federal tobacco control strategy.

This was the latest in more than 50 years of similarly-designed ambitious-sounding federal plans to wrestle the problem of smoking to the ground. The first was set by Judy Lamarsh, whose 1964 strategy aimed at "the reduction or elimination of this health hazard". The way to do it in 1964 was by providing the public with information, encouraging smokers to quit and discouraging non-smokers from starting. 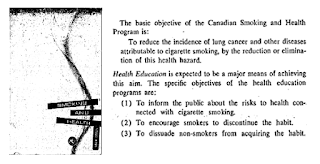 54 years later, much is the same. Today's goal is to "drive down the smoking rate in Canada to less than 5% by 2035." The way to do it is by "helping Canadians quit tobacco, protecting young people and non-tobacco users" with a nod also to "evidence-based decision-making" and "collaboration". (This year there are about 5.2 million smokers in Canada, about 17% of all people over 12.) 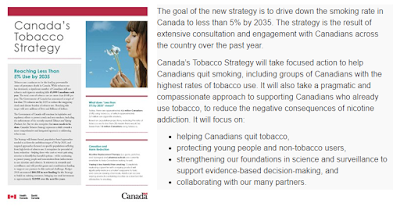 The Minister and her advisors may believe that by repeating this established approach it will continue to make progress in much the same way as it has over past decades. There is no doubt that the the slow introduction of incremental measures has contributed to a steady decline. Tobacco packaging is a case in point: progress was announced with the first voluntary warnings in 1970s, as it was with small mandatory warnings in 1988, graphic warnings in 2000 and bigger graphic warnings in 2014, and as it will with plain packaging in a few years.

The problem with incrementalism is that it is just so, well, incremental.

Many other knowledgeable Canadians have spent considerable efforts to demonstrate that bolder measures are needed. Endgame reports, scientific reviews, expert consensus, and citizen's groups have called for bolder and more innovative measures.

As we veterans of several past federal strategies wrote in the Gazette earlier this week, what is needed now is "a strategy that acknowledges the fundamental role of the tobacco industry as the continuing vector of tobacco-related disease. This would include a true harm-reduction strategy with firm plans to eliminate the most dangerous of all tobacco products, the combustible cigarette. We also need measures to prevent price-based manipulations that undermine taxation, and well-funded mass media campaigns."

A year ago, there were signs that Health Canada was preparing for bigger steps. Speaking to a hundred or more people from across Canada who had paid their way to the Ottawa Convention Centre to participate in a Forum on the Future of Tobacco Control, the former Minister of Health, Jane Philpott encouraged the believe that the process was headed for "a bold and innovative plan".

And some new directions.


It would be incorrect to suggest that  there is nothing new or different in the federal approach to tobacco. One key new element may well have a dramatic and long-lasting effect. Last week Royal Assent was given to bill S-5, which set the rules for vaping products. Harm reduction is here. 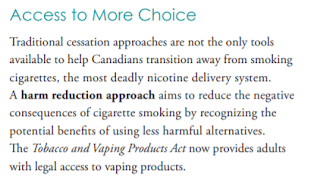 This is not the first time that harm reduction has appeared as an element of the federal plan -- the the version adopted in 2001 had used it as a fourth pillar in addition to prevention, protection and cessation. But the department's view of what harm reduction meant was only made public when it introduced Bill S-5 in the fall of 2016.

Harm reduction and the potential benefits and risks of vaping products remains controversial and much disputed in Canada, as it does elsewhere. Unlike most areas of tobacco control, there is no scientific consensus about the population impacts of the use of e-cigarettes.

By adopting a bullish view in favour of a market-driven transformation of the nicotine market, the Minister and her advisors have departed from their usual practice of insisting on a solid scientific footing before taking action. The department says that this approach will  "save lives". More on the evidence behind that claim in a later blog.

There are several welcome moves in the new strategy. Many of these were included in the Minister's speech, and do not yet appear on Health Canada's web-site. These notably are for measures that have been the target of recent advocacy efforts by some important health charities. The Minister announced that plain packaging will be implemented in the traditional Canadian slide-and-shell package and that warnings on individual cigarettes are under consideration. It was also announced that some funding may be available for some tobacco NGOs. (Full disclosure - we are among those who received funding before federal support ended in 2012).

There was more good news in the fine-print of the material made public. This includes the intention to make accessible to researchers more of the important information provided by the tobacco industry and a renewed (hopefully expanded) commitment to support the Framework Convention on Tobacco Control.

A key element of strategy is a focus on communities and groups of Canadians who smoke at higher rates than others. Special call-outs were given to Indigenous communities, LGBTQ+, young adults and construction workers -- all of whom smoke at rates much higher than the average.

One month before cannabis is scheduled to become legal, the department made no mention of the risks of smoking associated with cannabis use. Yet our review of 2013-2014 Canadian smoking rates found that cannabis users (those who reported using it two or more times in the past year) were, at 49%,  the highest of any identified Canadian sub-population. 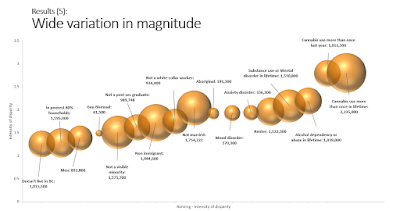 Ontario's "Next Chapter" for tobacco control

Last week a copy of the Ontario government's new 5-year plan for tobacco control was provided to us. (You can read it here!)

In many ways, this is an up-to-date strategy that modernizes the province's efforts to help smokers quit. In its acknowledgement of e-cigarettes and cannabis, the province clearly understands that circumstances in 2018 are very different than when the previous strategies were designed (The province first adopted a legislative approach in the mid 1990s when it became the first province to ban cigarette sales in pharmacies).

But in all significant other ways, the province has adopted a "forward to the past" approach. The objectives of the three strategic priorities - cessation, prevention and protection - are very little different than they were decades ago, although they are expressed in a modern management-speak.

There is little in the document to require tobacco companies to meet public health objectives, despite compelling reasons for doing so. Those who hoped that Ontario's slow-moving lawsuit against the companies would be a mechanism to assert industry change can only be disappointed by the complete silence on that file in this strategic document.


This government's "next chapter" for tobacco control is in most ways a shrunk-down and expurgated version of previous chapters. Future policy measures - like reducing availability of retail - are punted to never-never land of "exploring options". There are no new restrictions on tobacco industry practices. The much-discussed but not officially announced decision to de-fund major tobacco control activities (including research, training and youth mobilization) is kept in wraps. Previous commitments to mass media campaigns have been replaced with more modest suggestions of "public education" to "inspire people to quit."

It didn't have to be this way. Not so long ago, the Ontario government sought advice of experts and encouraged the compilation of evidence that was to inform its renewed strategy. In 2016, the Smoke-Free Ontario Scientific Advisory Committee, which included government and non-government scientists, identified the evidence to support a fourth strategic direction - - the "industry", and the importance of "innovative" approaches like restructuring retailing or imposing requirements on tobacco manufacturers to meet certain public health objectives (i.e. with respect to the quantity of cigarettes they sold).


This report was followed up the following year with recommendations of the Executive Steering Committee of the Smoke-Free Ontario modernization process.  At the head of their list of priority actions were ways to "Challenge and Contain the Tobacco Industry", suggestions for which included reducing the availability of tobacco in retail settings, reducing the supply of tobacco products in Ontario and making industry practices more transparent. Other suggestions were focused on beefing up the cessation system, providing protection from smoke in multi-unit dwellings, raising the minimum age from 19 to 21, and making university campuses smoke-free.

One might have thought that because these advisory processes were established by the ministry that some of the results would have been reflected in the final strategy. Few of the policy advances -- and none of the innovative measures -- appear to have survived the cut.

Not surprisingly, the government has done little to draw attention to its new plan. It is not, for example, listed on the Smoke-Free Ontario site and has been released without fanfare.

Health Canada's renewal of its tobacco control strategy was due to be renewed in April 2017, but was delayed to give the department an extra year to develop what we were told would be "bold" and "innovative" measures.

The extra year has come and gone without any signal from the department about what it has decided upon. In the meantime, the words "bold" and "innovative" have been dropped during discussions with outsiders.

If neither the Ontario government nor the federal government is willing to make bold moves to address the problem at its source, who will protect Ontarians?
Posted by Neil Collishaw at 08:23