Usually Friday afternoons are when governments try to bury news. So it is a bit of a head scratcher that it was at a TGIF moment that news leaked out that the federal government was proposing to ban menthol in cigarettes, blunt wraps (used to smoke marijuana) and many cigars.

The move came in the form of a proposed regulation published in the Canada Gazette, only a day after Prince Edward Island confirmed that it would be the sixth province to ban menthol.

It is a 180 degree reversal from the position taken by the previous federal government. Barely 4 months have passed since a federal additive ban which expressly exempted menthol came into force last December.

Tobacco companies have resisted the ban by filing lawsuits, and are likely behind the objections being raised at the World Trade Organization in response to the bans introduced in Nova Scotia and elsewhere.

It was after the provinces moved forward with their measures that the companies defiantly launched newer styles of menthol cigarettes in Canada. (The click-menthol "Next" brand shown below was launched by Philip Morris last year. Imperial Tobacco has also launched click-menthol products) 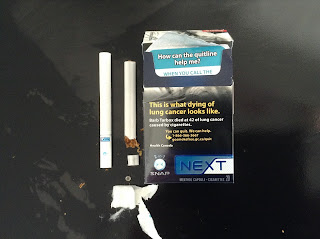 Posted by Cynthia Callard at 12:04

Bill Casey holds a private meeting with Big Tobacco. Should we care?

If the president of a tobacco company has a private meeting with the chair of a parliamentary health committee, is there a breach of Canada's treaty obligations to protect public health from tobacco industry interference? 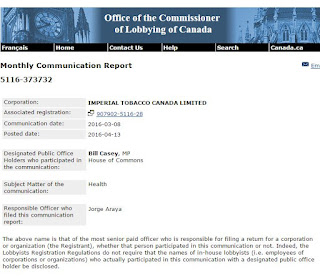 This question is more than hypothetical after Imperial Tobacco Canada, filed a communication report with the Office of the Commissioner of Lobbying, stating that a meeting was held between Imperial Tobacco and Bill Casey, who is a Member of Parliament from Nova Scotia and also the chair of the House of Commons Health Committee.

The meeting took place on March the 8th, and was reported to the Commissioner's office on April 13th by Jorge Araya, the "most senior paid officer" responsible for providing such reports.

Whether or not it was Mr. Araya or some other representative of the company who actually met with Mr. Casey need not be disclosed.

Nor is the company (or Mr. Casey) required to disclose more information than what is demanded in a drop-down menu choice of very broad topics. On that day, apparently, the "communication" involved "health". Nothing more has been made public

Mr. Casey was not the only Member of Parliament to grant a hearing to Imperial Tobacco representatives this spring, but he was the only one for whom "health" was the primary agenda item. (Communications reports were filed by Mr. Araya with respect to meetings with 10 other members of the governing Liberal party: Marc Miller, Bernadette Jordan, Pat Finnigan, Michel Picard, Sean Casey, T J Harvey, Darell Samson, Frank Baylis, Wayne Easter and Bill Blair. "Justice and Law Enforcement" and "Taxation" were the primary topics of these meetings.)

Article 5.3 of the Framework Convention on Tobacco Control imposes the following obligation on Parties to the treaty:

In setting and implementing their public health policies with respect to tobacco control, Parties shall act to protect these policies from commercial and other vested interests of the tobacco industry in accordance with national law.
Guidelines to help interpret this somewhat vague obligation were adopted in an early Conference of the Parties. These guidelines note the fundamental and irreconcilable conflict between the tobacco industry's interests and public health, and recommend that the formulation of public policy on tobacco be protected from the industry to "the greatest extent possible" and that any interaction with the industry is "accountable and transparent."

In its most recent (2014) report regarding treaty implementation, the Canadian government took the view that (a) it was not bound by the guidelines, and (b) public health policies were protected from tobacco industry interference. (Their complete response is pasted below.)

While Parties to the FCTC are not bound by the Guidelines, Canada has reviewed the Article 5.3 Guidelines in relation to the Canadian policy, legal and constitutional context. Canada has adopted administrative measures, such as Health Canada's policy of not partnering with the tobacco industry on tobacco control programming....

Generally, in Canada the primary channels of communication between governments and the tobacco industry are limited to (i) technical discussions in regard to both health and tax-related regulations and (ii) litigation-related responses."

Non-governmental organizations, including our own, found that this was one of the few areas of the FCTC where implementation in Canada did not meet the minimum standards. In the Shadow Report on FCTC implementation prepared by the Global Tobacco Control Forum in 2010, we found that Canada had failed to implement at least 13 aspects of the Article 5.3 guidelines.

It is not at all clear that parliamentarians would be subject to the obligations of the FCTC, which focuses on the executive branch of government more than its legislative arm.

Mr. Casey, after all, is a back-bencher and a member of parliament accountable to his constituents. He was elected as chair of the Commons Health Committee by his legislative peers. In theory, he is not appointed by government, and is not an agent of government.

The reality, of course, is a little more nuanced. It would be disingenuous to claim that committee chairs are completely independent of the executive branch of government.

Moreover, the committee that Mr. Casey chairs has a particular role to play in the development of tobacco control policies, given that regulations under the Tobacco Act are automatically referred to it for approval. These would likely include any regulations to fulfill the government's pledge to implement plain packaging.

It is highly likely that Mr. Casey has never heard of the FCTC, let alone Article 5.3. The industry may have mobilized well ahead of the capacity of the new government to fill in the gap left by the previous government's decision to dismiss concerns about industry interference.

It may be that Members of Parliament who have specific responsibilities for health policy face no prohibition on private meetings with tobacco industry officials. But they are certainly under no obligation to agree to such meetings.

Those who make such judgement calls could only benefit from some guidance. If Imperial Tobacco can arrange a meeting to discuss "health" with Mr. Casey, hopefully the health ministry can similarly be scheduled for a discussion about the "tobacco industry".

Posted by Cynthia Callard at 12:56