Is Health Canada really going to let Imperial Tobacco off the hook for its illegal vaping ads?

Before Bill S-5 was passed, a number of health groups (including our own) warned parliamentarians that this law would pave the way for tobacco companies to return to television advertising. Regretfully, we were right.


Between September and November  last year, Imperial Tobacco broadcast ads for its Vype Epen 3 on Canadian television stations. Although TV ads were permitted by the law, in our view this one was not. In October, we filed a complaint with Health Canada, pointing out where the advertisement contravened the sections of the Tobacco and Vaping Products Act which prohibited lifestyle advertising (s. 30.2).

And there it seemed to sit. We received no written response from the department, and it was not clear whether or when they had taken any enforcement action.

As it turns out, Senator Seidman had also been concerned about the advertisement, and on November 28th used her opportunity during the Senate's Question Period to request information on any enforcement actions. The Senate returned from its winter break last week, and the following reply was tabled on February 19:


Health Canada has initiated action. A notice of non-compliance was sent to Imperial Tobacco Canada on November 1, 2018. The notice demands that the company immediately cease the promotion of Vype Epen3 by means of lifestyle advertising on Canadian television and social media platforms.

Health Canada has a rigorous compliance and enforcement program in place to ensure that manufacturers, importers and sellers of vaping products comply with the Tobacco and Vaping Products Act (TVPA). If necessary, Health Canada will take further enforcement measures.

Additional restrictions came into force on November 19, 2018, including prohibitions on the sale and promotion of vaping products with features that are appealing to youth, the marketing of products using flavour names associated with candy, desserts, or soft drinks; and product promotion by testimonials or endorsements.


A list with more than 1,000 occasions when the Vype ad was broadcast in Canada after Health Canada informed Imperial Tobacco to "immediately cease" can be downloaded here. (The records were found in the program logs filed by broadcasters with the Canadian Radio-Television and Telecommunications Commission).

This was the starting gun on a race to dominate the legal vaping market. Some 8 months later, it seems that the federal rules for this race that were set in law are even weaker than expected, and have resulted in pervasive lifestyle ads -- except in Quebec and other provinces that have taken a better approach..

The federal law -- a permissive structure

The structure adopted in the TVPA is one that gives nicotine manufacturers a general permission to advertise, and then identifies styles of ads which are not permitted (i.e. lifestyle ads, ads that appeal to young people, testimonials). This “everything is permitted unless it is expressly forbidden” approach is the opposite of what the same law does with respect to tobacco products, where a a general ban on tobacco advertising exists, with some specific exemptions (i.e. direct mail addressed to adults). (Compare the law at s. 19-22 to s. 30).

The Quebec law - a restrictive approach

Of Canada's 10 provinces,  Quebec has taken the most comprehensive approach to controlling tobacco advertising. Under the Quebec Tobacco Control Act (updated in 2015), electronic cigarettes are considered a tobacco product. Generally speaking the same restrictions apply to both categories of nicotine products. Vaping ads are tightly restricted, and are banned if they are "disseminated otherwise than in printed newspapers and magazines that have an adult readership of not less than 85%". Even then, printed ads may only "provide consumers with factual information about a tobacco product, including information about the price or the intrinsic characteristics of a tobacco product and about brands of tobacco products." They must also include a prescribed warning.

Some other provinces have also adopted additional restrictions on vaping ads. Nova Scotia's Tobacco Access Regulations  exempts vaping stores from restrictions on displaying products at retail, but curtails their right to advertise other than by "a door decal"). Manitoba's Smoking and Vapour Products Control Act bans the advertising of vapour products "in any place or premises to which children are permitted access". Similar restrictions are in place in Prince Edward Island's Tobacco and Electronic Smoking Device Sales and Access Act.

Imperial Tobacco has shown that it is prepared to play fast and loose with the federal restrictions, but that provincial laws have offered some protection.

Television advertisements for Imperial Tobacco's Vype ePen3 appeared daily in 6 provinces across Canada between September 3 and November 18th. Television ads are (sadly) allowed under federal law, but lifestyle ads are not. Despite the obvious lifestyle elements of the ad,  it was broadcast until November 18th.

In January, broadcast logs for Canadian television stations were made public. From these, we now know that Imperial Tobacco's Vype ad was not broadcast in the provinces which have more powerful restrictions in place (Quebec, Nova Scotia, Prince Edward Island, Manitoba).

This ad was the subject of our complaint on October 18. If any enforcement action was taken by Health Canada against Imperial Tobacco or the broadcasters, no information has yet been made public.

In English-speaking Canada, Imperial Tobacco has focused marketing efforts on electronic publications, including ads on digital media, including newspapers, Instagram, Facebook and YouTube. As shown at the end of this post, these ads evoke excitement (explosions!), recreation (travel), glamour (sexy ladies!) and testimonials.

It is not clear at this point whether digital advertisers are respecting provincial laws and preventing these ads from being viewed in jurisdictions like Quebec. What is clear is that the ads that are being published in Quebec in conformity with its law are much closer to the intent of a ban on lifestyle advertising. 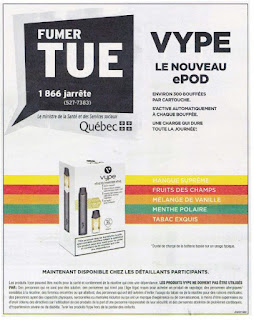 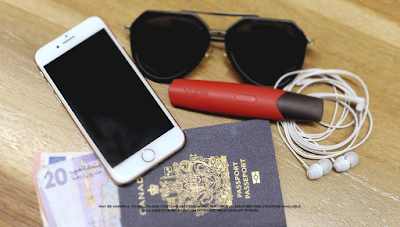 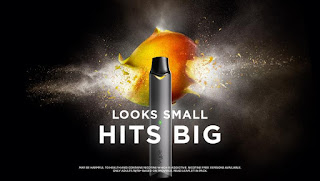 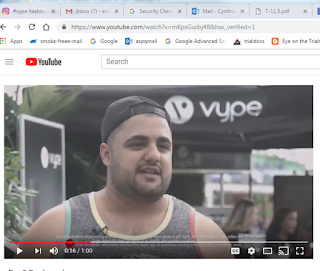 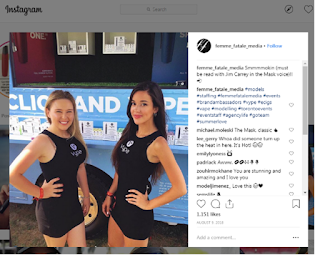 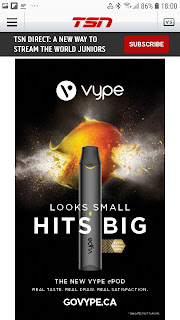