One week into the Canadian election, JUUL launches a political action campaign.

Tomorrow, the Canadian election campaign official enters its 2nd week. So far the focus has been on traditional voter issues -- jobs, the environment, taxes, etc.

But in the wake of the (now seven) recent deaths of young American vapers, the media has asked federal leaders whether they will follow the example of U.S. governments and put more restrictions on the marketing of vaping products. The response was a decided non-committal.

Is it a coincidence that in my e-mail today was an invitation from JUUL to "protect my vapour access" by becoming an "advocate for reasonable policies that protect adult access to vapour products to encourage them to make the switch from combustible cigarettes."? (As a keenly interested party, I had subscribed to their e-mail service.)

The invitation lead to a recruitment site  - The Switch Network  - which asked about my willingness to participate in a range of political actions -- from signing a petition, e-mailing elected officials, attending rallies or demonstrations or testifying at hearings.

A democracy depends on an active and engaged citizenry. But mobilizing addicts during an election?  I think that may be a new one, even for the nicotine industry. 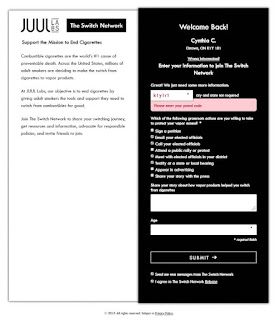 Posted by Cynthia Callard at 14:13

Why so anodyne? Canadians need strong, effective and truthful warnings on vaping packages

The federal government summer season of no-big-decisions usually runs from third week of June (St. Jean Baptiste Day) to the first week of September (Labour Day). On the eve of the break this year, Health Canada handed public health groups with a challenging summer task: published in the Canada Gazette on Saturday June 22 were 27 pages of proposed regulations for vaping products. Responses were due 75 days later, on September 5.


The proposed regulations are no trivial matter. They are the first significant regulatory proposals from government to constrain the way that nicotine products are packaged and labelled, or to control the amount or type of nicotine that can be sold as a recreational drug.

For decades, nicotine other than tobacco was controlled as a medication under the Food and Drugs Act. The tolerance that was given to vape shops was so extensive that many Canadians who bought nicotine liquids for vaping devices were likely unaware that they were participating in an illegal sale.

All this changed when the federal Tobacco and Vaping Products Act was approved by Parliament and proclaimed in May 2018. The legalization of nicotine changed the commercial market, bringing nicotine into the Fast Moving Consumer Goods (FMCG) market. Convenience stores became the route to market for multinational tobacco companies to compete for this new market. (Picture below courtesy of Toronto area South Bayview Bulletin Board).

Health Canada has yet to make public whether or how it will regulate the types of ads that appear in many convenience stores (several provinces have banned them). Their first priority was to develop labelling requirements and child-resistant container requirements. As Health Canada describes them,

The proposed labelling requirements include a list of ingredients, and, depending on the presence of nicotine and its concentration, a health warning that nicotine is highly addictive, the concentration of nicotine, and warnings regarding the toxicity of nicotine when ingested. In addition, the proposed Regulations would set out expressions that may be used on the product or package to indicate when a vaping product is without nicotine. The proposed Regulations would also require refillable vaping products, including devices and their parts, to be child resistant.

Health Canada's proposals for package warnings for vaping products are surprisingly unambitious for a country which invented graphic health warnings. The regulations require a only a text warning, only for one health effect and only on one side of the package. They are arguably less powerful than the warnings currently placed on a voluntary basis by the industry. 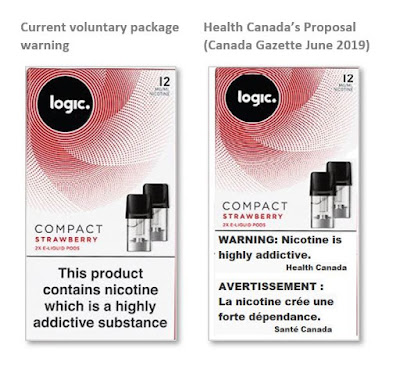 Canada can do better

This proposed warning seems even more  milquetoast now than it did when it was first Gazetted in June. South of the border, health authorities have spent the summer snarling at nicotine companies and expressing concerns about potential acute risks for young people who vape:
* JUUL was hauled before Congress to answer questions about its marketing strategies,
* top medical authorities issued unequivocal warnings that vaping products are "not safe" for non-smokers,
* campaigns with powerful messages were launched to communicate the risks to teenagers.

Admittedly, only one other country currently requires graphic health warning messages on vaping product packages (South Korea). Admittedly, it is important to design them thoughtfully -- and that takes more than the 75 days given to respond to the proposed regulations. Admittedly, Health Canada should not leave the packages of these risky products unregulated for any longer than necessary.

For that reason, we are proposing that in the short run, Health Canada require a strengthened and more prominent version of its warning be on all packages as soon as possible. Within the next year, however, it should be possible to refine and adapt a series of rotating messages which provide Canadians with the information about the range of health risks associated with vaping to which they are entitled. One of our suggestions on how to do this is shown below. 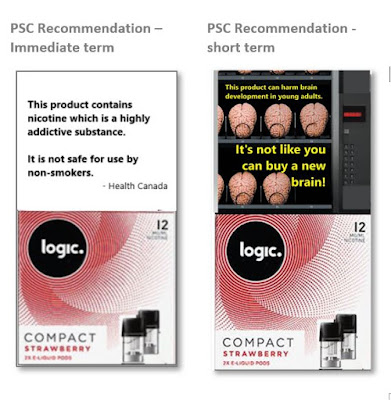 How much is too much? How fast is too fast?

The proposed regulation also sets limits on how much nicotine is permitted in the liquids or cartridges used with vaping devices. The level -- at 66 mg / mL -- is much higher than any of the major products currently on the market. This is in stark contrast to the European Union, Israel, Korea, and Iceland where the maximum level allowed is 20 mg/mL.

Nor does the regulation address the additional risks of nicotine salts -- which are shown even by the industry research to reach the brain more quickly than those which do not use this 'protonated' technology. It does little to respond to increasing concerns about the collateral damage of the nicotine arms race that is happening between JUUL and its imitators.

A time for sober second thought

More often than not, the final version of regulations varies little from the version that is initially published. Concerns about departmental regulation making once resulted in Parliament being given an opportunity to vet Tobacco regulations before they came into effect. This provision was removed when the law was updated  to include vaping products last year.

So the only recourse left is for a change of opinion by the department and the central agencies (Treasury Board, Privy Council Office, Cabinet) to which it reports. Cross your fingers!

Physicians for a Smoke-Free Canada's full response to the proposed regulation can be downloaded here. Our key recommendations are:

1. Vaping packages should carry warnings of the following risks:
2. Manufacturers should be required to place warnings on at least 50% of the top of two principal display surfaces, with one side each for English and French.

3. Graphic health warnings for vaping product packages should be developed.

4. Plain packaging of vaping products should be required.

5. The maximum allowable nicotine concentration should be set at 20 mg/mL.

6. The impact of the introduction of nicotine salts on youth vaping should be reviewed.

Posted by Cynthia Callard at 13:14

ICYMI: Health Canada releases a trove of research reports on vaping and smoking

Finished with trashy beach novels? Looking for something more gritty to read? Canada's National Library has just the antidote to those light reading blues -- a stack of consumer research reports on Canadians' knowledge, attitudes and behaviours related to tobacco/nicotine.

It's only a little more than a year since the Canadian government opened the door for tobacco company marketing of vaping products (prior to that it was a tolerated grey market supplied by tolerated illegal manufacturers and distributors).

In that time, it has proven frustratingly difficult to assess the impact of this market liberalization on the use of these products. Most of the available survey data on vaping predates the marketing of Juul, Vype, Stlth and other mass marketed nicotine products.

Canada's traditional health surveillance system has a lot going for it -- but it has not yet caught up with the vaping phenomenon. The core federal health surveys (like the Canadian Community Health Survey) have largely ignored e-cigarettes and the specialized surveys (like the Canadian Tobacco Alcohol and Drug Survey) were inexplicably suspended for the year the nicotine market was liberalized.

To address this gap, Health Canada has put significant resources into consumer research. This may not yield the robust indicators on smoking and vaping patterns, but it does helps us understand a little more about what is motivating those who do.

Federal policy dictates that all public opinion research be made public through the library within 6 months of finalizing the field work. Because much of the field work wrapped up at the end of the last fiscal year, the reports were uploaded to the Library of Canada website in late August.

Five of these reports are linked below.

Qualitative and quantitative research on perceptions of nicotine

The report covered both smoking and vaping behaviours of Canadians aged 13 years and old, exploring several aspects of each. It involved both focus groups and on-line questionnaires (with more than 4000 respondents online)  and was conducted by the Earnscliffe Strategy Group.  Banner tables from the study are also available, and included with the usual demographic break-downs are information on Indigenous and non-Indigenous populations. (The results showing the much higher use of nicotine and cannabis and much lower expressions of concern by Indigenous participants is sobering indeed!).

Tidbit: 1 in 10 daily smokers also vape with nicotine every day. 4 in 10 vapers smoke every day.


This innovative study sought insight into the role that tobacco use played in  adult smokers' lives. More than 500 smokers participated in an on-line survey and of those, 80 smokers submitted daily journals. The study confirmed that "Generally speaking, smoking appears to be a means to manage or cope with feelings and emotions. When it did come up, it was typically associated with the comfort of routine (and primarily the morning routine), or a moment for relaxation or quiet reflection. It can also have a calming effect when feeling overwhelmed or stressed."


This online survey was taken by 3,500 adult smokers and former smokers.  The researchers originally wanted to question people who had quit in the past year, but were unable to find enough of them. (!)  Given the publicity about e-cigarettes, a surprisingly low number of smokers (30%) acknowledged being familiar with them.

Tidbit: "Reactions to having health warnings printed directly on cigarettes are viscerally negative among participants who smoke, as they are considered unnecessary to warn those who smoke, and a costly approach. However, the presence of on-cigarette health warnings made smoking less attractive to people who smoke and less frequent smokers expressed mixed opinion regarding its potential to impact awareness of health hazards." 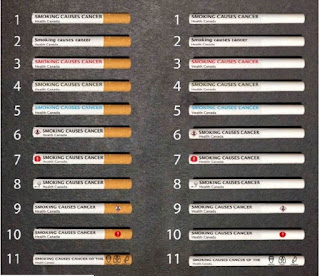 Tidbit:  1 in 3 smokers cannot recall seeing the Health Information Messages, even though they have been printed within each cigarette package for almost 20 years.