In case you thought Big Tobacco was on its way out...


The three big U.S.-based tobacco companies -- Reynolds, Altria, and Philip Morris -- returned 103 percent, 87 percent, and 34 percent to investors over the past two years, respectively, compared to a 14 percent return on the S&P 500.

Mergers and greater cooperation among supposed competitors are cited as some of the reasons for greater profitability. It also seems that that price of gasoline is important for cigarettes sales. The price of gas is dropping, so consumers have money left over to run in and buy a pack of cigarettes at the convenience store, now so conveniently attached to nearly every gas station. 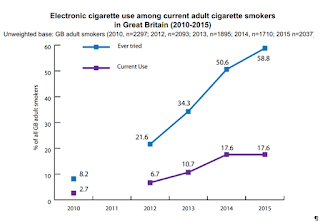 Some hold out hope that e-cigarettes and other non-combustible tobacco products might one day replace burning tobacco as less hazardous nicotine delivery devices. Maybe it will happen some day, but the tobacco companies are pursuing a much different strategy and piling up the profits while doing so. It seems that electronic cigarettes are not so much displacing regular cigarettes in the marketplace as they are being added on as one more addictive product. Kenneth Shea, a Bloomberg market analyst figures they are giving consumers more occasions to consume tobacco and that dual use of e-cigarettes and conventional cigarettes is common. This is confirmed by surveys reported by Action on Smoking and Health in the United Kingdom. 17.6% of current UK smokers also use e-cigarettes.


The reasons they give for doing so are given by the blue bars in the following graph.

Tobacco companies do not want to improve public health; they want to make money (Surprise! Surprise!)


They appear to already be profiting from dual use of conventional cigarettes and e-cigarettes.Their plans, previously revealed during investor day presentations in 2015, are being effectively carried out. For example, British American Tobacco (BAT)( www.bat.com) wants to be the “world’s best at satisfying consumer moments in tobacco and beyond.” 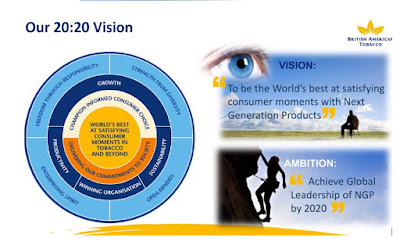 If tobacco companies continue to be left to their own devices and if dual use of combustible and non-combustible tobacco continues to increase, continuing profitability of tobacco companies can be expected.
A new heat-not-burn tobacco product called iQOS developed by Philip Morris is currently available for sale in Italy, Switzerland and Japan. It might turn out to be another money-maker. BAT has similar products in development. BAT has a number of non-combustible tobacco products already on the market or in development. It refers to them collectively as “Next Generation Products” (NGP). One might wonder how such products will be regulated. Instead of wondering about it, BAT is setting about to create the regulatory environment it desires. As told to its investors in 2015, BAT is “shaping future regulation.” 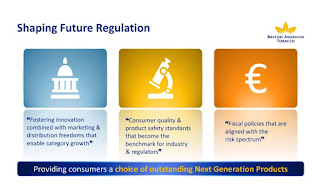 In seeking “marketing and distribution freedoms that enable category growth”, “product safety standards that become the benchmark of industry & regulators”, and “fiscal policies that are aligned with the risk spectrum”, will BAT run afoul of Article 5.3 of the Framework Convention on Tobacco Control (FCTC) which states:


“In setting and implementing public health policies with respect to tobacco control, Parties shall act to protect these policies from commercial and other vested interests of the tobacco industry in accordance with national law.”

Many people and organizations are looking to profit from the looming legalization in Canada of marijuana for recreational use. Organizations as diverse as medical marijuana suppliers, big drug store chains and the Ontario government have all expressed an interest in claiming a piece of the potential legal marijuana trade. So far, the Canadian tobacco industry has not publicly declared any interest in the marijuana business.

Canada’s Liberal government announced in the December, 2015 Throne Speech that it intends to “legalize, regulate and restrict access to marijuana.” Given Big Tobacco’s appalling track record on public health protection and continuing desire to maximize profits, governments would do well to think long and hard about what role, if any, tobacco companies might be permitted to play in the legal-but-regulated marijuana business.
Posted by Neil Collishaw at 15:04