This week marks 6 months since the federal government published a regulation banning menthol in cigarettes, and the end of the 180-day coming-into-force period. After October 5, 2017, menthol cigarettes cannot be sold in Canada.

Health Canada is to be congratulated for this move -- and thanked also for making available some very interesting data on the sales of these products in recent years.

Tobacco manufacturers are required by law to report to Health Canada how many cigarettes of each brand they ship to each Canadian province. While the brand-name shipments have not been made public in recent years, aggregate data on categories of products is sometimes revealed. 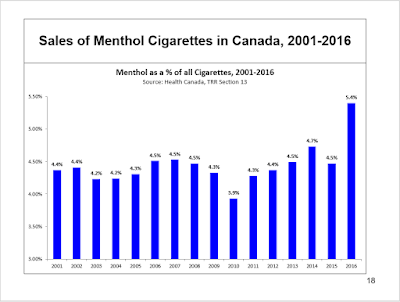 The reason this information was surprising was that menthol cigarettes had been banned in several provinces, beginning with Alberta and Nova Scotia in 2015. By the end of 2016, as shown below 5 provinces had bans in place.

In the provinces that had not banned menthol, these products were growing in popularity, as made clear by the year-over-year trend data and the provincial market share data also provided by the Tobacco Control Directorate at Health Canada. Menthol cigarette sales had grown to about 10% of the markets in B.C., Manitoba, Saskatchewan which had not moved to introduce marketing restrictions on this youth-friendly flavouring. (If provincial market share data has been made public for previous years, I am not aware of it.) 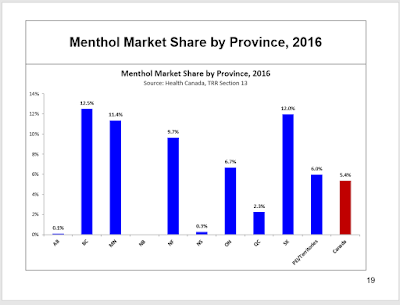 Although click-menthol and other novelty flavoured products were introduced in many parts of the world a decade or so ago, they were only recently introduced in Canada -- curiously after the bans had been legislated in the more populous provinces.

The power of these products to draw customers is reflected perhaps in the large increase in those provinces where bans were not coming into effect. British Columbia saw a doubling of the menthol market to about 1 in 8 cigarettes sold in that province. 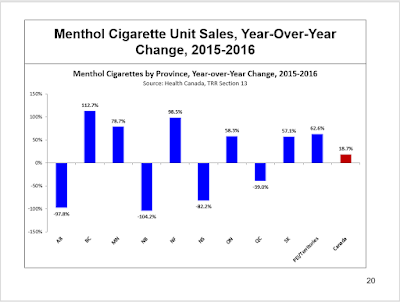 In finalizing its regulatory decision, Health Canada provided a summary of the estimated costs and benefits of the measure, as well as reporting on the feedback they received from health organizations, the industry and others. These suggest that the campaign for a menthol ban is not yet over, and that pressure will remain for the federal government to ban the substance from all tobacco products, as most of the provinces have done.

Posted by Cynthia Callard at 11:56