Yesterday, word went round that JUUL had opened a flagship store in Canada's flagship city. And to mark the opening of the store on Toronto's Queen Street West, the controversial vaping company launched a pilot program for its new "C1" device. 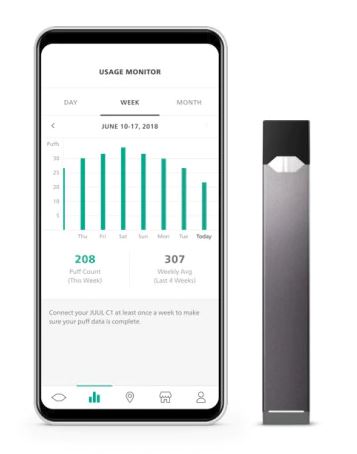 The JUUL C1 differs from the current ubiquitous model in that it is equipped with bluetooth capacity, and is intended to be used in conjunction with a mobile app. Visitors to the store or JUUL's Canadian web-site (or the U.K. site where the C1 is also being sold) would have every reason to think that this has been done for their benefit:

How can the JUUL app benefit me?
The JUUL app, currently a pilot, is designed to help users manage their nicotine consumption and combat unauthorized use. The app provides connected features such as:

• Usage Monitor, gain greater control and visibility of your usage. Real-time monitoring with daily, weekly, and monthly tracking of your puff use.
• Device Lock, JUUL C1 features automatic device security. You can manually lock the device, or set it to Auto-Lock to prevent unauthorized use when your JUUL C1 is not being used by you.
• JUUL Locator, keep track of your JUUL C1. When in range, ring it to play a sound. When out of range, see where it was last paired to your phone to help you stay on your switching journey.

Missing from this sales-pitch, and from the Google Play store is information on how the mobile app connected to the vaping device can help JUUL monitor the consumer behaviour of nicotine users.

For this information, a more helpful source is the trade-mark database managed by Industry Canada.  Not quite 2 weeks ago (on July 22), JUUL filed its description of goods that would be sold under the JUUL C1 label. (Trademark registration 1976819). In addition to the location and blocking functions, the C1 also seems designed to monitor and report on the movements and communications of vapers.

In their own words, JUUL C1 covers a host of other data-collection functions:

Juul is not the first company to include surveillance mechanisms in its device. Reuters commissioned a teardown of the bluetooth function of IQOS, and reported last year that the technology would allow the company to gather data from unwitting users.

In the era of digital marketing and Big Data, this type of consumer research can't be considered a surprising development. But shocking, nonetheless!.

Posted by Cynthia Callard at 13:28

Earlier this summer, the French government continued with one really good idea:  getting French communities to work together to combat addiction, and giving them the money needed to do so effecxtively.

The announcement was made in the form of a second request for proposals on the web-site of the French Ministry of Solidarity and Health (even in French the title is catchy -- "Ministère des Solidarités et de la Santé".  Civil society organizations, academics, health professionals and other non-commercial interests are invited to apply for funding.

A similar RFP was issued last year for mobilization projects focused on tobacco, with a budget of 5 million euros. The "Fonds de lutte de tabac" as it was then known, allocated more than 90 million euros to other tobacco-related program costs.

The Ministry's objectives for civil society activities, as translated, are pasted below. They include exposing the marketing practices of tobacco, alcohol and cannabis industries, and denormalizing the use of these addictive products. Applications can be submitted up to September 16, 2019.

The best part? French tax payers are not footing the bill for this work. Since 2017, the "Fonds de lutte" has been financed by a special tax on the tobacco industry.

Extract from the Ministry of Solidarity and Health

As part of the fund for the fight against addiction, a call for projects is launched to support actions of a national nature carried out by civil society actors . It is open until September 16, 2019 .

Project promoters must be non-profit and have no link with the tobacco industry (Article 5.3 of the World Health Organization Framework Convention on Tobacco Control) or supply chain operators alcohol or cannabis.
Posted by Cynthia Callard at 07:41

A poster on the door of a convenience store caught my eye last week. On the corner of Parkdale and Scott Street in Ottawa BAT's Vype ePod starter kit was being promoted at $10.99. In this neighbourhood, it is now cheaper to to buy nicotine than lunch. 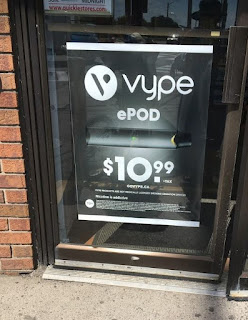 BAT has made big cuts to the price of its VYPE products in Canada. When the ePod was first available in Ottawa in January, the price was over $40, The ePen 3, introduced late last summer, was priced at a more modest $25.

But the price cuts are deeper in some stores than in others. This Quickie store might sell the ePod for $10.99, but in most other outlets and on the official on-line distributor, the price is consistently set at $19.99.

Deep discounting at this one store is no random event, nor is it a retail promotion beyond the control of BAT. To the contrary, the imagery, warning and other design elements of the price sign make clear that this was executed by the Vype marketing team. This is an official sign using licensed design.

Nor should it be a surprise. BAT/Imperial Tobacco Canada has pioneered localized wholesale pricing for cigarette products. Since the federal government made doing so legal in 2009, this company has charged different wholesale prices to different retailers, using contracts and incentives to control the amount of mark-up a retailer can add.

By comparing the price charged for Vype products on BAT's global on-line e-store (govype.com) and on its U.S. equivalent (vusevapor.com), a similarly dramatic difference in list price can be seen between countries. Prices are available for the ePen in 10 countries and for the ePod/Alto in 5. As shown below, the 'starter kits' for both products are cheaper in Canada than in most or all other countries. The same product is 50% more in France and the United Kingdom, and more than twice as expensive in Germany and the United States.

(Prices were converted to Canadian dollar equivalents at the exchange rate in effect on July 1).


The dose is the problem

Comparing the information on BAT's e-store reveals other differences that pose risks to Canadian youth. The vaping solutions sold by BAT for these products have much higher levels of nicotine in Canada than in all other countries other than the United States.

In the European Union, there is a regulatory limit of 20 mg/ml, but in other markets the nicotine level is set at BAT's discretion. A similar increase of nicotine levels in American markets has been linked to a nicotine arms race against JUUL.

One more tool available to protect youth from nicotine addiction


Although the use of tax to discourage young people from experimenting with tobacco products has long been established as a core public health strategy, there has been little discussion - so far - about using taxes to prevent ultra-low pricing on vaping products (or to prevent companies from giving them away

Health Canada has acknowledged that youth vaping is a problem and recently consulted with the public on regulatory options to address the problem (Reducing Youth Access and Appeal of Vaping Products: Potential Regulatory Measures). The consultation paper identifies that price is a main factor in the purchase decision of youth, but makes no recommendations for any public health interventions to address the impact of affordability on youth initiation. 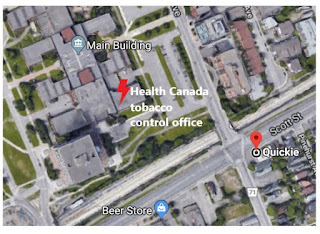 Maybe it's time to give this additional tool more thought.

And with this particular price sign only a stone's throw from Health Canada's tobacco control office, perhaps this might happen!

Posted by Cynthia Callard at 14:27