It's time for Health Canada to clamp down on vaping ads

Almost a year has passed since the federal government opened the door for tobacco companies to begin to sell vaping products in Canada. (Until May 23, 2018 it was illegal to sell recreational nicotine devices in Canada).

It wasn't long before vaping among kids was recognized as a public health crisis. Principals took the doors off washrooms. Parents wrote letters to government. Public Health Units spoke with alarm.

What hasn't happened yet is a clamping down on the types of marketing that are driving the youth vaping epidemic. Health Canada has said that they want to put new regulations in place, but they won't have time to do so for another year or so. Groups like ours want the law to be strengthened to remove all advertising, but with an election around the corner and bills piled up in Parliament, this is not going to happen soon either.

So what is to be done? For a start, a stricter application of the current law would lessen the volume and the harmfulness of the ads that are now in circulation.

PSC has identified four important areas where the Tobacco and Vaping Products Act could be enforced, but is not. They are:

Youth appealing designs.
Health Canada is not enforcing the ban on vaping devices whose design is appealing to young persons. (S. 30.41) Enforcing this restriction would remove from the market those products (like JUUL) which are driving the youth vaping epidemic.

Misleading advertising
Health Canada is not enforcing the ban on promotions which create a general impression that the products are less harmful than they are. (S 30.42(1-2). Echoing Supreme Court decisions on the need to protect inexperienced consumers, the Quebec Court of Appeal recently ruled that the absence of appropriately detailed and prominent health warnings on tobacco promotions is a form of misleading advertising. Enforcing this restriction would remove advertisements, brand activations and social media posts where warnings do not meet the standards established by court. 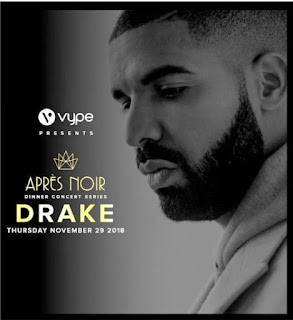 Testimonial advertisements in exchange for gifts or money
Health Canada is not enforcing the ban on the use of testimonials and endorsements in vaping advertisements. (S. 30.21(1). Vaping companies are engaging young people as brand activators, distributors and social influencers to promote vaping devices through face to face and on-line contact, often in exchange for gifts or money, a practice which is also contrary to the TVPS (s. 30.6). Enforcing these restrictions would protect young people from this commercialized peer pressure.

Want to know more?  Our backgrounder can be downloaded here!

Posted by Cynthia Callard at 03:00

The first one is free.... Imperial Tobacco gives away its addictive Vype product

To be polite, let's use the term 'ironic' to describe what took place in the same neighbourhood and at the same time that Imperial Tobacco was seeking court protection from having to compensate smokers for having misled them about the health effects of smoking in the 1950s through 1990s.

On Toronto's bustling Queen Street on April 25th -- only a few hundred metres from the University Avenue Courtroom where they were facing down the desire of the Ontario government to continue its suit against them --  Imperial Tobacco was seen clearly using the same fear-assuaging marketing playbook to market vaping devices as it had previously done with cigarettes. On this afternoon the door to its Vype van was wide open as the company invited passersby to enter, sign up and register to receive a free samples of its addictive nicotine vaping device.

A "general impression" of fun? Yes

It would be hard, but not impossible, to miss the warnings on the door and side panel of the customized truck that was parked on the north side of Queen Street that day. But it would be equally hard to pay them much attention. From only a few feet away, the print was too small to read, and against the dramatic truck design there was little attention to spare. Besides, who has time to stop and read on Queen Street?

Far more inviting than the warnings was the open rear door of the truck and the steps that led inside.A group of twenty-somethings had created a cosy and convivial atmosphere. Everyone was waiting to sign up and receive a free starter kit of the Vype ePen3, including two of its new nicotine flavour cartridges. Unlike the previous flavoured nicotine pods marketed for this device, the ones being offered for free this day are made with the more powerful (and addictive) nicotine salts. 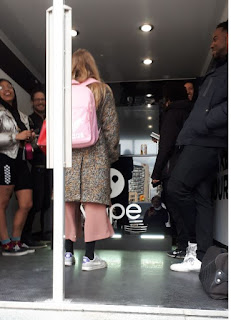 As I waited my turn, I had a chance to watch the two enthusiastic hosts behind a desk at the cab-end of the truck space. They carefully asked each visitor for proof of age, and noted the name and age of each in a log book. Dozens of pages of names had been recorded before mine was added to the list and I was invited to use an i-Pad to enter my name and mailing address.

The atmosphere in the truck was one of  laughter and camaraderie -- the two black men ahead of me got fist bumps and hugs as they left. Any comments I overheard about the vaping products being promoted were related to the flavours, colours and the time expected before delivery.

When my time came to talk with the hosts, I learned that they were hired as "brand ambassadors" and that their truck would be moving around Toronto for the next several weeks, giving away free Vype vaping devices as well as samples of two new flavours recently introduced for this device - both of them using nicotine 'salts'.

I did not ask about and they did not mention any risks (or benefits) of vaping nicotine. In response to my rambling questions about the differences between this product and the others I had heard about, like JUUL or the Vype e-pod, I got very little information but lots of big smiles.

A "general impression" of harm and addiction?  No.

The young men who invited me to receive my first free nicotine vaping device may have gone home thinking that their job complied with the law. They had, after all, made sure that everyone's age was verified. They had not made any health claims. They had were working in a truck that had a health warning, and sharing printed material that also contained a warning that the product "may be harmful to health" and that it contains "nicotine which is addictive."

But the experience of being invited to join the crowd in the truck and sign up for a free sample was like déja vu all over again - a blast to the 1970s past when cigarette companies put small warnings on the side of packages while they used promotions that discouraged consumers from thinking too hard if at all about the health risks.

The Quebec courts have now made clear that manufacturers must meet higher standards in their duty to warn. They have now established that advertising which is inconsistent with health warnings is a form of misleading advertising in the laws of that province. The responsibility of manufacturers to warn is summarized paragraph 227 of Justice Riordan's 2015 ruling. The Appeal Court confirmed these and, like Justice Riordan, established that lifestyle advertising was a form of misleading advertising, as it marketing practices that aimed to undermine knowledge of the risks was a form of misleading advertising as they conceal the harmful and toxic effects of the products. Even with health warnings, ads could be misleading, said the Appeal Court, if they do not counter the "general impression" that is left by the promotion that the products are less harmful than they are. This new standard of what the general impression to a credulous and inexperienced consumer is a test that has been set by the Supreme Court of Canada.

Among the many Canadian laws which prohibit deceptive advertising is the new federal Tobacco and Vaping Products Act, (TVPA) which bans promotions that are likely to give a general impression that is "erroneous" about the health effects or health hazards. (s. 30.42).

It is hard to see how Health Canada can fail to link these events, and shut this Vype promotion down as leaving an "erroneous" "general impression" about the likelihood of addiction and harm that would be received by the "credulous and inexperienced purchaser."

Brand ambassadors, testimonials and other 'considerations'.

But if that is not enough, there are other ways in which the Vype truck promotion likely runs afoul of other sections of the TVPA.

This law says that companies cannot give vaping products away in return for a service. (s. 30.6) Yet on this past Thursday, the devices were only given away in return for the service of registering in their data base. In a data-driven marketing economy, the provision of one's name and address can only be seen as a consideration.


The law prohibits the use of testimonials or endorsements -- "however communicated".  (s. 30.21) It's hard to see the role of  brand ambassadors and social media influencers as anything but endorsements. The encouragement and physical contact given by these charming young men for people to enter their names into Imperial Tobacco's marketing data base in return for a free device was an endorsement communicated most personally,

There may be reason to hope that this promotion will not last long.

On April 21st, Health Canada officials shut down a different street promotion for Vype in Toronto.  On that occasion, a more permanent installation had been staffed by women attendants (in silver suits) for the Easter holiday weekend. According to news reports, the installation and material was seized by government inspectors on the basis that the promotion was "deemed to be in contravention of the prohibition on lifestyle advertising of vaping products and the prohibition on the use of testimonials and endorsements to promote vaping products.”

Why Imperial Tobacco thought it could persist with brand activations (or whether Health Canada has told them they cannot) is not clear.

The free vaping device arrived this morning by Canada Post and after signing and showing proof of age, it is now mine to keep. 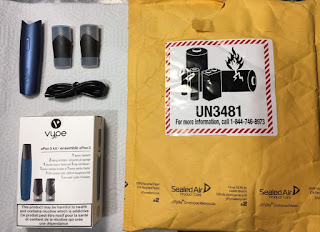 In comparison with the warning about the battery on the shipping label, the warning on the box seemed non-alarming. And there were no warnings at all on the device as it is meant to be used -- nor any on the "crisp mint" and "tobacco" flavoured pods.

The Vype brand activation team had told me that the delivery would be made within 2 to 3 business days. In fact it took a week longer. If only that were the extent of the misinformation...

Posted by Cynthia Callard at 18:01