Trying to put a glow on i-Glo.

The Vancouver Sun reported this week on - yet another! - trip to Vancouver by Jorge Araya, the  head of British American Tobacco's Canadian subsidiary, Imperial Tobacco.  Mr. Jorge Araya is a relative newcomer to Canada (he arrived in January 2015), but he is clearly a seasoned tobacco pro.

The occasion for this visit was a speech before "a small group gathered for a Canadian Club of Vancouver luncheon." The text of his comments has not been made public, just as his speech at a bespoke Vancouver a month earlier were not released.

Fortunately, an interview between Mr. Araya and Derrick Penner of the Vancouver Sun is available on that newspaper's website. It suggests that Imperial Tobacco's messaging (and strategy) are not all that much changed over the past decades. 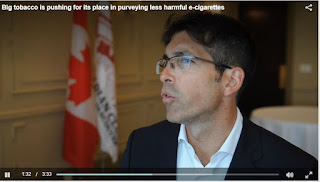 What Mr. Araya did not say.
In the absence of any meaningful or transparent government consultation on the future of combustible products and the usefulness (or not) of vaping and heated tobacco products to replace them, it is only when business puts its head above the ramparts that the public is made aware of the content of their regulatory proposals.

A counterpoint can be found in the United States, where the FDA announced only last week that it was looking at a way to connect approval of sale of next generation products with regulatory changes aimed at reducing (or ending) the use of combustible cigarettes.

Posted by Cynthia Callard at 12:27