Important Progress in France and Quebec

Two important advances were made this week in tobacco control laws in key members of La Francophonie.

On Wednesday, the French parliament adopted a law to require plain packaging of cigarettes, becoming the fourth country to put this measure into law (after Australia, Ireland and the United Kingdom).

And this Thursday morning, the Quebec legislature gave unanimous consent to Bill 44, An Act to bolster tobacco control, which contains a number of regulations that raise the bar for public health.

The bill brings controls on smoking in Quebec up to the level currently in place in other provinces (no smoking in cars with children present, or on certain outdoor public places, like patios or near doorways of public spaces).

It also imposes new regulatory restrictions on cigarette marketing, including:
* a ban on flavours, including menthol (to come into force 6 months after Assent)
* an end to bonuses or other incentives paid by manufacturers to retailers
* a minimum size for warnings, which will have the effect of removing from the market smaller packages for slim cigarettes. (The reduction in warning size for these packages is shown below) 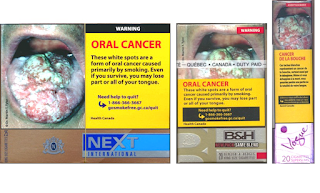 One of the most encouraging aspects of the Quebec bill is the breadth of support that it received in the National Assembly, whose members further strengthened the law that was proposed by the Minister of Health, Mme. Lucie Charlebois.

A special shout-out is warranted for the Minister, for her opposition counterpart, Mr. Jean François Lisée, and for our colleagues in the Quebec health community who encouraged their efforts.
.