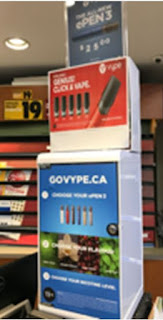 In the less than the 3 years that vaping products have been legal for sale in Canada, British American Tobacco (BAT) has shown itself to be one of the most agressive marketers of vaping products in this country. Its shareholders have been rewarded by these efforts, and the company recently informed them that its VUSE brand had a 40% share of the Canadian vaping market.
But changes in federal and provincial laws have forced the company to find new ways to encourage Canadians to their new nicotine products - (addiction makes repeat customers easier to recruit.)
Over the past year federal and provincial governments have clamped down significantly on vaping promotions. Retail displays like the one shown here were long banned in many provinces, but were removed from Ontario Convenience stores only 12 months ago. In the summer such displays became illegal across the country, when federal regulation also made it illegal for manufacturers to promote vaping products "by means of advertising done in a manner that allows the advertising to be seen or heard by young persons."
Previous posts have reviewed how BAT is adapting its marketing to these new restrictions. This post looks at recent trademarks registered by the company and what they might suggest about its new marketing stratregies.
1) Sell Local. Promote Global
The VYPE brand is gone and the VUSE brand has taken its place, although the product and design elements remain. During the past year, British American Tobacco standardized the name of its line of e-cigarettes, creating uniform branding across all of its global markets.
In recent months, BAT has transferred the VUSE trademark from U.S.-based Reynolds American to its global nicotine brand, Nicoventures. More than a dozen new VUSE trademarks were registered in Canada this past year.
This action signals the company's intent to benefit from platforms with global reach, like Instagram, Youtube, Tiktok and others. Global branding creates brand re-inforcement among advertisements, promotional videos and messages posted by paid and volunteer influencers. It exploits regulators' reluctance to clamp down on cross-border promotions.

"Inspiration" is a word that is now commonplace in VUSE-promotions. Noteworthy this fall was their "Routes of Inspiration" series that conencts the traditional marketing vehicles for aspirational tobacco marketing -  racing, fashion, music and art.

The trademark for "Routes of Inspiration" was formalized in Canada this December and is currently being used with a three-way partnership among the band Rudimental, the Maclaren racing team and BAT, to e-concerts by various artists, profiles of the creative process, and collaborations with other concert promoters and lifestyle influencers. 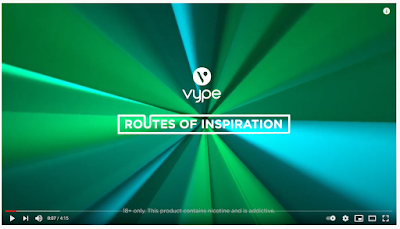 Last May, the related trademarks "V X U" and "Vuse X U" were registered in Canada and a number of other countries. This trademark is used to promote brand engagement through the personalization of a customer's vaping device.

Users can choose their own designs of their vaping products, even by transferring the sound of their voice into a digitized design.

"Create your own custom engraving with our collection of patterns, mini icons and text. Or engrave your voice with our new audio signature." "Audio Signature - Coming soon"

4) Use branding to increase the impact of flavours
BAT may be using branding techniques to intensify the value of flavours to vapers and potential vapers. Its use of powerful logos, interactive web-design, animation, music and exotic names could be expected to increase the intensity of the flavour experience and the importance of the flavour to the user.
Nicoventures (the branch of BAT which sells e-cigarettes) has developed origami (folding) logos for its many flavours. Trademark applications for 23 origami flavour designs were filed this fall in Canada and elsewhere. These designs are used worldwide in e-cigarette packaging and promotions - they are beautiful to look at and are even more impressive when spinning in animation within Instagram and other promotions!)

Another marketing tactic to generate engagement with flavours is to refresh the menu of flavour options. The number of flavours available has expanded greatly:

* Over the past 12 months, the number of flavour choices has been expanded greatly. Where there was previously only one tobacco flavour, there are now four: Aromatic Tobacco, Golden Tobacco, Rich Tobacco and Smooth Tobacco.

* 11 additional flavour names and designs have recently been trademarked in Canada: Blended tobacco, Blue Grape, Coconut Cream, Dark Cherry,  English Tea,  Fresh Apple, Indigo Blackcurrent, Rich Raspberry, Simply Banana, Velvety Pear. (Registering a trademark, of course, does not establish that a product or flavour will be marketed, but it does provide evidence of a marketing strategy.) 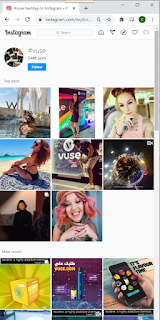 Despite federal and provincial reguations, BAT's promotions for e-cigarettes are available to anyone with internet access through social media posts and videos, or even news releases. The new Inspiration concert and racing events complement and extend other "#inspiration" messages used to promote VUSE in social media. They are a further development of the company's  "charge beyond" campaign of last year.

But to reach this promotion, the viewer will also take in 8 other promotions linking VUSE with lifestyle imagery. These appear to be user generated, but on closer inspection are uploaded by individuals who identify themselves as professional models or brand ambassadors, or by BAT companies operating outside Canada. 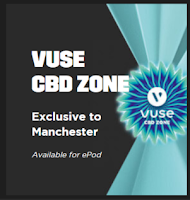 Although BAT has not openly discussed plans to sell cannabis or hemp-based products, last year it BAT registered the trademark for "CBD Zone" in Canada. On its UK web-site it is currently offering these products for sale in Manchester. CBD is a controlled substance in Canada, but there are no legal barriers in Canada to BAT expanding its business scope into cannabis-based products.

7) Defend your trademarks only if it is your advantage to do so.

By trademarking the terms that are used to connect these ads (like #vusechargebeyond, which was trademarked last year), the companies can presumably use their intellectual property rights to decide who can contribute to their social media presence, and who cannot. Those who use their trademarks in ways the company does not like can be required (or strongly encouraged by lawyers' letters) to remove them. 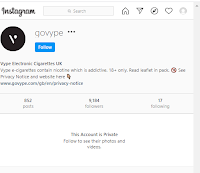 Currently BAT does not appear to have taken measures to ensure that Canadians do not see content using their trademarks.

Posted by Cynthia Callard at 06:54