One year later: Weedless Wednesday Advice from the Chief Medical Officers of Health

Last year, about 6 weeks before Canada and the world became gripped with the COVID-19 pandemic, Canada's Council of Chief Medical Officers of Health (CCMOH) issued a collective statement related to the highly-transmissable vaping variant of the older tobacco pandemic.

On Wednesday, January 22, 2020 the CCMOH issued their third joint statment on "Nicotine Vaping". In it, they called on governments to shift their approach to vaping so that these products were used only as a way to end nicotine use. They specified about two dozen "regulatory and policy recommendations that we believe are necessary to be taken by federal, provincial/territorial and municipal governments to address this rapidly emerging public health threat." 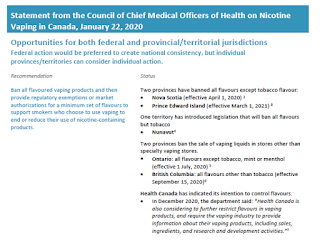 This post reviews actions that have been taken in the past year to respond to these recommendations. A more detailed and referenced score-card  noting areas of achievement and non-action can be downloaded here.

In the past year, virtually all governments have strengthened controls on the vaping industry.

In the past 12 months, seven (Alberta, British Columbia, Nova Scotia, Newfoundland and Labrador, Ontario, PEI, Saskatchewan), and three territories (Yukon, Northwest Territories and Nunavut) as well as the federal government have advanced regulatory controls on e-cigarettes. Two other provinces (New Brunswick and Quebec) have also indicated their intention to do so.

* Two provinces have adopted bans on all flavourings except tobacco flavour (Nova Scotia and Prince Edward Island), and one territory has introduced legislation to that effect (Nunavut). Health Canada and Quebec have indicated they plan to do so. Ontario and British Columbia restrict the sale of some flavourings to adult-only specialty stores.

*Three provinces have imposed new taxes on vaping products (British Columbia, Nova Scotia and Newfoundland), and one province (Alberta) has signalled it intends to.

* One province has increased the minimum age for vaping (and tobacco) products to 21 (Prince Edward Island).

*Across Canada, vaping promotions which can be seen by children have been made illegal (as a result of federal regulations). Some provinces already had these measures largely in effect.

After a challenging year, much work is left to be done.

The progress across Canada to better protect young people from tobacco-vaping companies is all the more remarkable given the overwhelming need to address the COVID-19 crisis. Hopefully in the coming months additional provinces will be able to follow the jurisdictions which have put taxes in place to address the affordability of vaping products for youth, have banned flavours, have increased the age to 21, have used plain packaging to end package-based promotions, etc. In addition to these measures, last year's statement provided many other actions governments should take to properly administer this important public health file.

A key recommendation has been shunned.

The CCMOH called for a new approach to regulating alternative nicotine products, one which was based on allowing them for sale to adults "if they are proven effective in decreasing or stopping the use of all nicotine-containing products."  They also called for governments to regulate "such devices as equivalent to tobacco products" and to encourage smokers to use them ONLY to end all forms of nicotine use. No Canadian government has yet acknowledged these recommendation or indicated support for them.

The same companies which are driving the vaping epidemic have signalled their intention to sell other forms of nicotine and to move "beyond nicotine" (to cannabis-based products like CBD). Regulatory frameworks to manage these new risks are not yet in place.
Posted by Cynthia Callard at 06:56