Job not done! Half a million Canadian workers are still exposed to second hand smoke on the job. 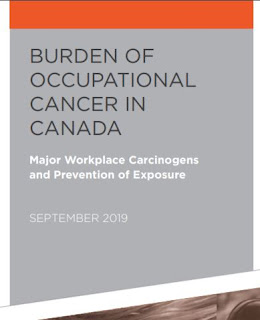 This week an updated report on the Burden of Occupational Cancer in Canada was circulated.

The research was prepared by the Occupational Cancer Research Centre with financial support from the Canadian Cancer Society and the Canadian Partnership Against Cancer.

The results on occupational exposure to second hand smoke might surprise those who think that workers are currently protected in Canada. By the CAREX's estimates, over half a million workers continue to be exposed.

Below (with permission) the sections of this report are reprinted.


Second-hand smoke is a mixture of solid particles and gases released from burning cigarettes and exhaled cigarette smoke (122). This mixture contains numerous carcinogenic substances such as benzene, formaldehyde, and benzo(a)pyrene (122, 123). Second-hand smoke is a wellestablished lung carcinogen, with limited evidence that it may also cause cancers of the larynx and pharynx (122). A large study that examined the effects of secondhand smoke exposure in workplaces found that the risk of lung cancer increased by 24% among non-smoking workers who were exposed to second-hand smoke. The study also found that among workers who were classified as highly exposed to second-hand smoke, the risk of lung cancer increased by 100% (124). Other health effects associated with exposure to second-hand smoke include heart disease, exacerbation of asthmatic and allergic reactions, and premature death (123, 125, 126). The 2006 United States Surgeon General’s report concluded that any exposure carries some risks to respiratory health (126).


All Canadian provinces have smoke-free regulations that restrict smoking in almost all enclosed workplaces, while some provinces allow a separated ventilated room to be built in the workplace (123). Some provinces have made exceptions for certain workplaces. For example, Ontario allows for controlled smoking areas for residents of residential care and psychiatric facilities, facilities for veterans, and hotels, motels or inns (127). In most provinces, the regulations set out permitted distances that smokers may smoke away from building entrances, windows and air intakes, although the distance varies by province, ranging from 5 metres in Alberta (128) to 6 metres in British Columbia (129), and 9 metres in both Ontario and Quebec (127, 130).

Figure 27 presents the occupational burden of lung cancer attributable to secondhand smoke, by province. In Manitoba and Saskatchewan the attributable fraction is slightly higher, where approximately 0.7% of lung cancers diagnosed are due to occupational exposure to second-hand smoke. Differences in the breakdown of the labour force within provinces likely contributes to variations in attributable fractions across provinces (Figure 27). Burden estimates for second-hand smoke are presented here for non-smokers due to the difficulties in separating the impact of personal smoking and second-hand smoke exposure on cancer risk. 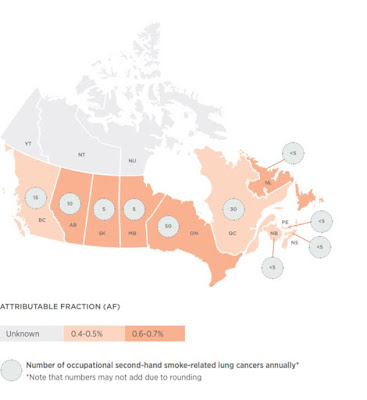 The general, overarching policy recommendations, presented later in this report, can be applied to second-hand smoke, in addition to the following specific recommendations:

Build on successes by strengthening current smoke-free legislation and its enforcement.

Exposure to second-hand smoke has decreased in recent decades as a result of new legislation, increased awareness of the health effects associated with secondhand smoke exposure, and populationwide changes in smoking behaviour (132). However, workers continue to be exposed, even in workplaces with smokefree policies, indicating that enforcement of existing policies may be an issue (131). Furthermore, the strength of smoke-free legislation varies by province. For example, only Ontario’s legislation specifically states that home health care workers have the right to request that a person refrain from smoking in the health care workers’ presence, and the degree to which this is enforced is unknown (127). Smoking bans have been evaluated as the most effective measure for reducing second-hand smoke exposure (133). Legislation must be expanded across provinces to protect workers who are not covered by current legislation (i.e., outdoor workers, workers providing services in client’s homes). Furthermore, efforts must be jointly taken by agencies responsible for public health and Ministries of Labour to enforce smoke-free legislation in workplaces across all provinces. These efforts could include aligning their regulatory and enforcement strategies to the extent that their individual mandates will allow.