Smoking rates have fallen -- but maybe not for the reason you think.

Last week Statistics Canada made available the Public Use Microdata from the Canadian Community Health Survey conducted in 2017 and 2018.  The gift of a 1000 variables!

The Canadian Community Health Survey (CCHS) is the doyen of Statistics Canada's health surveillance system. For 2 decades, government pollsters have used this survey to find explore the health and lifestyles of Canadians (aged 12 and up). To the benefit of all, data from this survey is made freely available to external researchers every two years in the form of a Public Use Micro File.

The methodological changes made to the survey in 2015 have not diminished its role as the most robust national measure of smoking rates in Canada, and the most reliable tool to look at progress. In this first of a series of posts using the new data, we look at progress between 2007-08 and 2017-2018.
Smoking is down -- but not because of quitting.
Smoking prevalence rates are the core indicator for monitoring tobacco control efforts. But the prevalence rate by itself does not tell us why changes are happening. It's too easy to think it is because smokers are quitting, when there may be other population factors at work.
The change between 2007-08 and 2017-18 is a case in point. Over that decade, the number of smokers fell -- but the number of former smokers barely budged. It was the growth in never smokers (and the growth in population) that really made a difference. In that decade the population growth of 3.3 million people included an increase of 1.1 Canadians who say they have never smoked a whole cigarette. 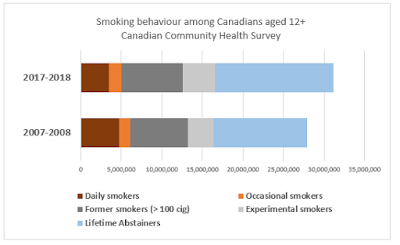 More than 4 million Millenials and Gen Z are now on board, but 2 million from the heavy-smoking Silent Generation have been lost.

To take a closer look at population changes, we compared the smoking behaviour of separate population cohorts, those born in the decades ending with the survey year. For the survey's purposes, these can be seen as mostly aligned with the classic generations:  the Silent Generation (born before 1937 and between 1938 and 1947), older Boomers (1948 - 1957), younger boomers (1958 - 1967), Generation X (1968 to 1977), Xennials (1978 to 1987), Millenials (1988 to 1997) and Gen Z (after 1998).
Each of these successive generations have different relationships to tobacco use, and received very different messages about tobacco in adolescence. As a result, smoking prevalence was much higher in some generations than in others.Three-quarters of Canadian men born before the mid 1950s (when smoking was widely accepted and advertised) tried smoking at least once, compared with only one-third of those born in the 1990s (who grew up surrounded by much less tobacco promotion or public smoking).
Differences in these experiences, combined with differences in the proportion of the population that is in that generation can greatly affect the overall smoking prevalence rate. Over the past decade, many of the Silent Generation disappeared from the CCHS roster. An even larger number of Gen Z Canadians entered the pool of CCHS respondents. 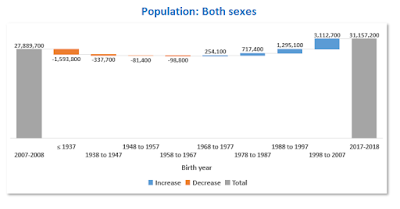 The number of Canadian smokers dropped by a million. It would have been almost double that had young people not been recruited to replace them.

There were about 6 million smokers in 2007-08 and only 5 million in 2017-2018. Each generational cohort had a steady drop off in the number of smokers -- totalling 1.8 million fewer smokers among Canadians over 30 years of age in 2017-2018.
Sadly, tobacco companies continued to recruit replacement smokers for those lost clients. Of Canada's 5 million smokers in 2017-2018, more than a million were born after 1998 -- three-quarters of them started smoking after 2008.

In 2007-2008, 7.1 million Canadians said they had smoked more than 100 cigarettes in their life, but didn't smoke any more. A decade later, that number had climbed to only 7.6 million. These were not the same Canadians, as more than 800,000 former smokers in the Silent Generation were no longer around to answer surveys at the end of the decade.
By the logic of the survey, there are two main ways a population of smokers can change status: they can become former smokers or they can disappear from the survey, likely because they have died.
This dark underside of falling smoking rates is exposed in the difference between the reduction in the number of smokers over a decade and the smaller growth in the number of former smokers. For example, among those who were in their 60s in 2017-2018 (i.e. born between 1948 and 1957), there were 342,600 fewer smokers after 10 years but only 135,700 more former smokers. 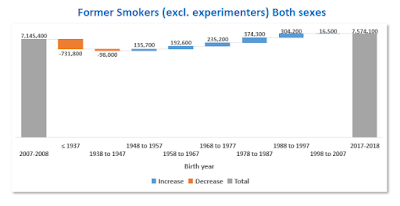 Many more "never smokers" made a difference.
Statistics Canada provides two measures of people who can be considered to have never become a regular smoker. There are those who say they have never smoked a whole cigarette ("lifetime abstainers") and those who may have smoked one cigarette, but have never smoked more than 100 in their lifetime ("experimenters").
Both of categories have grown with succeeding generations. There were 3 million more lifetime abstainers in 2017-2018 than a decade previously, and three-quarters of a million more "experimenters". 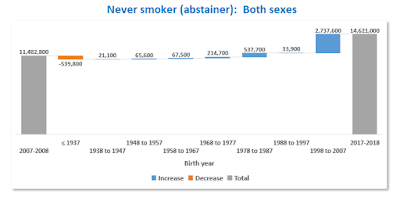 In some presentations, former experimenters are lumped together with former smokers, inflating the apparent success of quitting efforts by blending together those who never became established smokers with those who did but managed to quit.
The takeaway? Smoking rates are falling, but quitting does not get the credit.
An Excel worksheet from which these tables have been built can be downloaded here.
Posted by Cynthia Callard at 06:55