Last February, 2,027 Canadian vapers sat down at a computer and answered a questionnaire prepared by Environics Research on behalf of Health Canada. Six months later, the report summarizing their answers has been available at the Library of Canada. (Link: POR 083-18 Vapers Panel Survey to Measure Attitudes and Behaviours Regarding Vaping Products).

The results provide some data for discussions about vapers' use of flavours and what impact restrictions on flavours might have. The text below is reprinted verbatim from the Environics report. Excel tables are also available for people who wish to dig deeper into the findings - or into the other attitudes that were reviewed.

And there is more to come! Federal government reports on consumer research identify that a follow on study (POR 141-18) was commissioned, although it has not yet been released.

Flavours are important to vapers

The feature regular vapers like most about their device is their ease of use, although flavours, device colours and the ability to do tricks is of relatively greater importance to youth vapers. 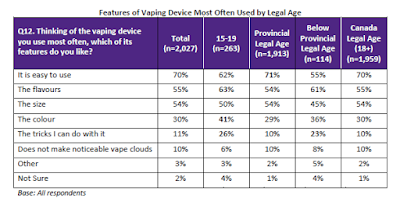 Flavour preferences of young people differ from those of older vapers
The preferred flavour choice for regular vapers is fruit (30%), followed by tobacco flavour (15%), mint/menthol (13%) and candy/confectionary (9%). Preference for fruit flavour is particularly pronounced among youth vapers (45%) and young adult vapers (39%), while preference for tobacco flavour skews to vapers aged 25 and older. 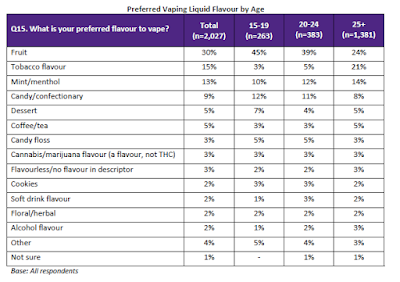 Tendency to switch between multiple flavours varies by age. Close to half (48%) of youth vapers use multiple flavours throughout the day or week, whereas only one-third (36%) of vapers aged 25 years or older do so.

One-quarter of vapers relate flavour choice to quitting
Those who have used different flavoured vaping liquids were asked about their main reasons for switching flavours. The most common reason is to experiment with the flavours (53%). Others say it depends on their mood (35%) or on price (25%). Some also say flavour switching helps them gradually quit or reduce smoking cigarettes (24%). This reason is more commonly given by adult vapers (27%) and by current (31%) and former (22%) smokers. Otherwise, reasons given for flavour switching do not vary significantly by age.

Flavours are the main reason cited by never-smokers for vaping.
Reasons for vaping depend on smoking history, with dual users and former smokers most commonly using it for smoking cessation. Never smokers - of whom most (70%) are youth or young adult vapers - choose to vape because they like the flavours/smells, as a social activity, or for emotional reasons (e.g, it's fun, reduces boredom).

• Among dual users, adult vapers are more likely than others to cite the desire to reduce the number of cigarettes (53%), while young adult and adult vapers are both more likely to cite the desire to quit outright (46% each). Youth and young adults who are dual users are relatively more likely to say they vape because of the flavours/smell (41% and 39%), for fun (23% and 19%), to reduce boredom (25% and 17%), or when they are in certain social settings (22% and 20%).

• Among former smokers, the number one reason for vaping among all age groups is to help them quit smoking.

•Among never smokers, the top reason for vaping among all age groups is the flavour/smell. Youth and young adults are more apt to give multiple reasons, including the excitement of vaping (48% and 42%), doing tricks (39% and 27%), and because their friends and family vape (35% and 23%). 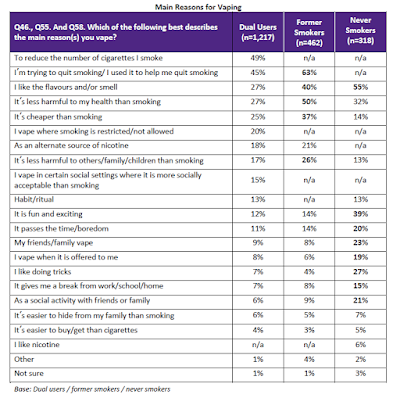 Those who have used vaping to quit think flavours are important
Both former smokers and dual users currently trying to or planning to quit believe it is at least somewhat important to have a range of vaping flavours available to them.

Posted by Cynthia Callard at 13:30