How much has vaping reduced cigarette sales? Not much, says Altria to its investors

Yesterday Altria made a regularly-scheduled presentation to investors, giving them an update on their business results for the first 9 months of their fiscal year. 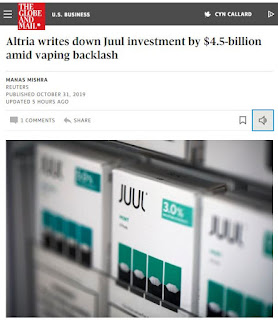 Altria sells that country's most prominent cigarette brand (Marlboro), but there was very little interest in its report of the cigarette marketing.

Instead, investors' focus was on Altria reports on the value of the 'strategic investment' it made last December when it spent $12.8 to get a one-third stake in JUUL.Because JUUL is not a publicly traded company, this is as close to insider information on the vaping market that investors will get. (Altria reported that JUUL is now worth about $12 billion less than it was at the beginning of the year - losing one-third of its market value.)

Altria's main business is cigarettes, but it is looking to increase sales in new forms of Oral Tobacco (ON!), Heated Tobacco (IQOS) and to profit from investments in E-vaping (JUUL), wine, beer and cannabis.

In yesterday's slide presentation to investors (the web-cast script is not available at this time), Altria focused investors' attention on the shifting patterns of nicotine use.

Three slides from that presentation are worth a second look.

#1: Vaping among adults (21 years and over) is not growing fast. 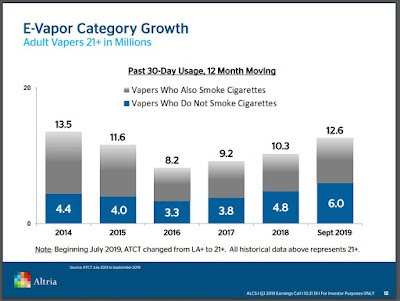 #2: Cigarette sales are dropping:
- for every 20 cigarettes smoked last year, this year there are only 19.

The reason? Altria says it is because smokers are substituting some cigarettes with e-cigarettes and because some smokers have completely switched to vaping. "We continue to believe that increased adult smoker movement to e-vapor and increased exclusive e-vapor category usage are the primary drivers of the accelerated decline."

But when Altria looks more closely at the 5% decline, vaping is only half of the  reason .... 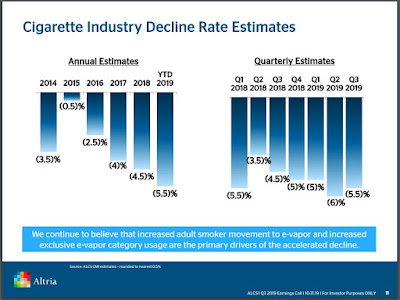 #3: Vaping and other nicotine products have reduced cigarette sales:
- for every 48 cigarettes smoked last year, 1 has been replaced with an e-cigarette.

Altria "decomposes" the 5.5% decline in cigarette smoke and attributes the decline as follows:

It also reassures investors that at this time there is no reason to think that vaping will lead too many smokers to quit any time soon. "We reaffirm our 2019 U.S. cigarette industry volume decline estimate of 5% to 6% and maintain our compounded annual average U.S. cigarette industry volume decline estimate through 2023 of 4% to 6%." 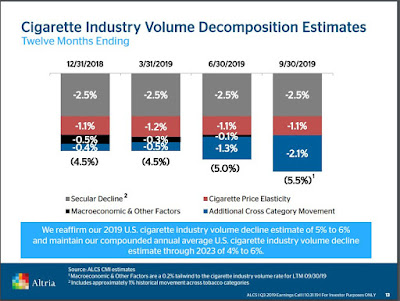 Can we trust these numbers?

Credibility is an ongoing challenge for tobacco companies, and the health sector has good reason to avoid using industry data as the basis of any public health decisions. Nonetheless, this Altria presentation shows ways in which the factors that might influence the tobacco market can be disentangled.

Grist for the mill!
Posted by Cynthia Callard at 06:58