How cheap will vaping products get before we see price as part of the youth vaping problem?

A price war is underway among the four main manufacturers of the pod-style vaping products that are sold in convenience stores. Over the fall, each of the companies which sell these JUUL-type products has reduced its retail and/or on-line prices.

The cost of a tellingly-labelled "starter kit" for JUUL imitators (Logic and Vype) is now less than $10. The JUUL starter kits are more expensive (as low as $30), but are half the price they were this summer. It is now cheaper to vape all day than than to buy a specialty coffee.


With this latest round of price cuts, convenience store prices for vaping prodpucts have fallen by 45% to 75% over the past year.
The price of the nicotine pods used in these devices has also fallen. A package of 2 Vype e-pod cartridges was selling in Montreal this week for $6 (half the original listed price), and 2 Logic cartridges could be bought for $5. (One pod is loosely understood to be the equivalent of a package of 20 cigarettes).

Decades of research have shown that low tobacco prices lead to higher rates of children and young adults smoking (and higher tobacco prices reduce it!). It stands to reason that the well-established economic principle of higher-prices-reduce-use would apply to e-cigarettes.

Pricing is a key component of all marketing strategies, and has become increasingly so with tobacco. The U.S. Federal Trade Commission is unique among governments in demanding and make public the aggregate promotional budgets of the tobacco industry. Earlier this year it reported that 85% of the advertising budget of U.S. companies ($7.3 of $8.6 billion) was spent on price discounts. As traditional advertising has been banned or fallen out of favour, the companies are focusing their efforts on the sticker price.

Tobacco companies with deep pockets are well-positioned to engage in a long-term price war, and there are reasons that their shareholders will be happy to endure the short-term losses that could result:
* low prices allow them to expand their long-term (addicted) customer base, on which they can make future profits.
* low prices allow them to undercut vaping businesses that sell through vape shops, and may drive these these small-business competitors out of the market.

Last March, Canada's 3 large tobacco companies sought protection under Canada's insolvency laws (the Companies' Creditors Arrangement Act), including the manufacturers of Vype and Logic. As a result, the profits that they would normally send back to their multinational owners has been frozen with the expectation that this will be handed over to the provinces and others who are suing them. The court did not, however, freeze their promotional budget for tobacco or vaping products. Deep spending in Canada on vaping promotions (even if it exhausts their Canadian cigarette revenues) will not affect the overall profitability of their multinational owners -- and it may enhance their long term profits.

1)  Tax officials can use excise and sales taxes to ensure a minimum price.

Taxes are one of the most highly recommended public health strategies to reduce youth use of harmful substances like alcohol and tobacco. Evidence shows that taxes are very effective at protecting young people (and others!) from tobacco use. In Canada, the federal government currently imposes a tax of $2.44 on each package of 20 cigarettes, and provincial government taxes on the same package range from $2.98 to $5.90.

Many jurisdictions are moving to implement vaping taxes, and 2 Canadian provinces are also taking this important step. This week British Columbia announced that as of the new year, the provincial sales tax on these goods would increase from 7% to 20%. This was one component of a larger set of reforms to address what health minister Adrian Dix described as an "addictions trap for our youth". Three weeks ago the Alberta government promised that would impose a tax on vaping products next year, but has not yet set the amount or the style of tax.

Taxes can reduce affordability - but only if they are set at a high enough level.

As a World Bank report recently pointed out, there are additional ways to address affordability through taxes. Available structures include taxing the devices, imposing a tax per ml of nicotine fluid, or per mg of nicotine, or per pod. Sales taxes alone encourage price competition because reducing the price also reduces the tax, whereas using excise taxes to set level of tax per unit helps ensure a minimum price. 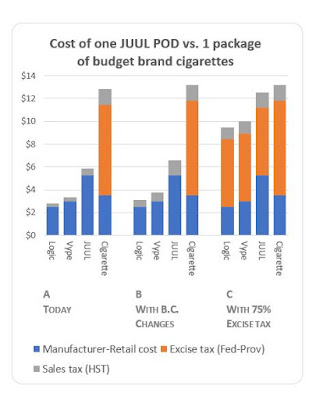 2) Health regulators can use price regulation to reduce experimentation.

Canadian governments have used other regulatory means to prevent manufacturers from using price to increase the consumption of harmful products"
* minimum unit pricing of alcohol is a measure adopted by many Canadian provinces (including Ontario).
* minimum package size is a measure used in tobacco control to prevent companies from selling "kiddy packs" of fewer than 20 cigarettes.
* Quebec has combined minimum pricing with minimum package sizes to implement a de facto minimum price for little cigars of $10.00.

Other countries have managed prices in ways that prevents price wars among manufacturers or retailers for tobacco products.  In France, Brazil and Japan, for example, retailers can only charge the price for cigarette brands that are on a government-approved list. (Although France does not impose a price list for e-cigarettes, Japan and Brazil ban these products altogether).

Federal regulatory changes which facilitate tobacco and nicotine price wars can be undone.

Tobacco companies have established distribution structures which give them greater control over retail pricing. A decade ago, tobacco products were distributed through wholesalers, and each retailer paid the same price. But after changes to the federal Competition Act in 2009, manufacturers were given the right to use "discriminatory pricing" to give special discounts to selected retailers. The contracts under which retailers gain this advantage commit them to using lower mark-ups, and passing the saving on to consumers.

The result is that in some stores cigarettes (and vaping products )are much cheaper than in others, even in the same neighbourhood.

The challenging road ahead

With deep pockets, a well-established route to market, decades of experience and a loyal (addicted) consumer base to maintain revenues, tobacco companies can afford to use vaping products as a lost leader for nicotine use.

Amazon and Uber have shown how sacrificing profits can be used to expand a market footprint and to both create and dominate a new market category. There is no reason to think that "Big Nicotine" would not do the same.
Posted by Cynthia Callard at 13:55