Banning menthol and other flavourings in cigarettes

Despite an international scientific consensus in favour of banning menthol in tobacco products, the vast majority of countries continue to permit tobacco companies to add menthol to cigarettes.


The number which do will grow dramatically this week. On Wednesday (May 20th) the sale of menthol cigarettes will be banned in the 27 member states of European Union and also the United Kingdom.

Outside of Canada (and now Europe), only a handful of countries - Turkey, Moldova, Uganda and a few others - have ordered tobacco companies to stop adding menthol flavours to cigaretes. Some countries have tried and failed: tobacco companies used challenges (eg Brazil) or intensive lobbying (eg the USA) to prevent health authorities from taking this step.

All the more reason that Canadians should be proud and appreciative of the efforts of federal and health ministries for succeeding where others have failed or not ventured. This month we celebrate the 5th anniversary of Nova Scotia becoming the world's first jurisdiction to ban menthol in cigarettes. It was that province's strengthening of its Tobacco Access Act in May 2015 that set the stage for a now Canada-wide ban on flavoured cigarettes.

This post reviews the Canadian experience of restricting menthol and other flavouring additives in cigarettes, and some assessments of the benefits of such regulations. (A chronology of events is available on a downloadable fact sheet.) 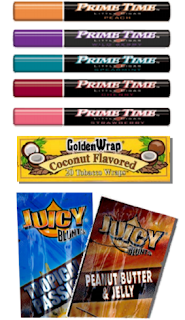 Regulatory controls on cigarettes are stronger than those on cigars and other tobacco products. In the early 2000s, some tobacco manufacturers began to exploit that difference, introducing individually-packaged fruit- and candy- flavoured little cigars on to the market. These 'little cigars' were the same size and shape as cigarettes, and were sold with cigarette-type filters. Buy because the wrapping paper was made with tobacco leaves, they met the legal definition of cigars.

The strong appeal of these products to young Canadians was soon recognized, and in 2009 the federal government introduced the first law banning flavouring ingredients in some Canadian tobacco products. Menthol was exempted from these flavour restrictions, as were larger cigars and other tobacco products.

Sadly, this law was soon circumvented by companies which redesigned their products to take advantage of the remaining loopholes. Young people continued to be the primary market for this sweeter tasting smoking experience.

Quickly, both provincial and federal governments were encouraged to adopt more powerful restrictions, and to also ban menthol in cigarettes

... to more comprehensive bans on flavourings ...

Over the last half-decade, provincial, federal and territorial governments greatly strengthened restrictions on tobacco flavourings. Two approaches have been adopted:


1. Banning the use of additives, including flavouring agents. This is the approach taken by the federal government.

2. Banning the sale of cigarettes or other tobacco products which have a “characterizing flavour”. This is the approach generally taken by Canadian provinces.

Seven Canadian provinces and two territories have implemented bans on flavoured tobacco, including a ban on menthol cigarettes.

Nova Scotia was the first province to ban menthol in Canada (and one of the first in the world), a measure it introduced in the spring of 2015. Nova Scotia exempted some products from its ban, as did three other provinces and one territory which have adopted flavour restrictions. These are Alberta (2015), Ontario (2016), Newfoundland and Labrador (2017) and Northwest Territories (2020).

Three provinces and one territory have implemented comprehensive bans on flavours in all tobacco products: Quebec (2016), New Brunswick (2016), Prince Edward Island (2017) and Yukon (2020).

In November 2018, a federal ban on the sale of menthol cigarettes came into force.

The federal government has comprehensive restrictions on flavourings in cigarerettes, certain small cigars and blunts. There is an exemption for some alcohol-flavoured small cigars. Health Canada currently does not restrict the use of menthol or other flavour additives in large cigars, pipe tobacco, kreteks, waterpipe tobacco, snuff, chewing tobacco, roll your own tobacco or heated tobacco. These are, however, banned in some provinces, as shown below. 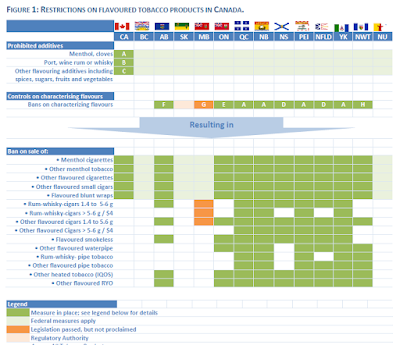 There is growing public concern about the role that flavours play in inducing young people to use vaping products and Canadian regulators are now grappling with regulating this new candy-coated addiction.

Again, Nova Scotia is providing leadership. It is the first Canadian province to take action on this issue - its ban on flavourings in e-cigarettes came into force on April 1.

Additional challenges are on the horizon. BAT has developed flavoured nicotine pouches (made without tobacco, and thus exempt from tobacco regulation). These are currently in sale in the UK and in the USA - where they are sold in a variety of flavours.  (These 'modern oral' products were discussed here earlier).

Menthol cigarettes have been successfully phased out


Traditional menthol cigarettes have historically represented about 5% of the Canadian cigarette market. Capsule menthol products, highly popular in some countries, were sold only briefly here before the menthol ban came into force in November 2018. But with menthol bans in place in the most populous provinces by 2017, menthol products had already largely disappeared from the Canadian market the previous year.

To date, public studies suggest that the menthol ban in Canada reduced the number of smokers. These include reviews of the Canadian experience by health researchers and also by British American Tobacco. Industry analysts have also predicted that menthol bans will reduce cigarette consumption.

Researchers at the University of Toronto and Health Canada recently published a review of the impact of the Canadian menthol ban. Michael Chaiton and his research partners compared data on cigarette sales from 2012 to 2017 from a Canadian province which did not ban menthol (British Columbia) with one that did (Ontario). The Ontario ban on menthol cigarettes came into force at the beginning of 2017. They found that in British Colmbia there were no significant changes in cigarette sales in 2017, but there were sharp declines in Ontario. "This suggests that menthol regulations in jurisdictions with a larger percentage of menthol smokers are likely to be highly effective."

Another study led by Michael Chaiton followed a group of Ontario smokers before and after the ban on menthol. It found that those who had smoked menthol cigarettes regularly were more likely to have quit than were those who smoked regular cigarettes. Banning this additive resulted in an increased overall rate of quitting 1 year later.

British American Tobacco's report on events is consistent with the evidence that a ban on menthol will reduce cigarette smoking.  In a presentation to investors last year, it reported that while traditional menthol cigarettes had a market share of 4% (as Health Canada reported), the capsule market picked up an additional 10% of the market-share. BAT also reported on the impact of the menthol ban on smokers in Alberta. (slide 32), on whom it had hired Kantar to do follow-up surveys. One percent of all smokers (equal to 17% of menthol smokers) had stopped smoking cigarettes after the ban was in place. With Canada's low prevalence of menthol use, however, BAT found there was "no material industry impact post ban."

Industry trade analysts agreed. "The recent ban on menthol tobacco products, such as cigarettes, is likely to make it even harder for tobacco suppliers to recruit new young customers." Euromonitor wrote in its 2018 (not public) Report on Canada. Two years earlier, in another (subscription-based) review of the global tobaco market, it had predicted that the ban on menthol in Europe would reduce the number of cigarettes smoked by 25 billion.

Posted by Cynthia Callard at 04:47