While the world and public health systems have been gripped with managing COVID-19, a number of regulatory changes have nonetheless been put in place with respect to vaping products.

Dialing down the nicotine:

Last Tuesday, Nova Scotia adopted regulations "to add restrictions respecting nicotine potency ... effective on and after September 1, 2020". It is believed that the limit set will be 20 mg/ml. Nova Scotia is the first province to adopt this ceiling.

On April 28, Ontario formalized regulations which will allow only specialty vape shops to sell vaping products that have higher nicotine levels than 20mg/ml. This will come into force on July 1.

The regulations adopted by Ontario in late April will restrict the types of flavours that can be sold in stores other than specialty vape shop.  Convenience stores and other locations will only be able to sell tobacco, menthol and mint frlavours. This will come into force on July 1.

On April 1st, Nova Scotia became the first Canadian province to ban the sale of flavoured vaping products. Prince Edward Island has proposed draft regulations to similarly restrict flavours, for which notification was given to the World Trade Organization.


On March 1st, Prince Edward Island banned the sale of vaping products in stores other than specialty vape shops, and set the legal age for sale at 21 years.

Other provincial governments and Health Canada have indicated that they intend to strengthen other regulations on the way these products made and sold. In March, Minister Hajdu told Parliament that "nicotine concentration and flavours are two of the areas where we believe we need to take stronger and quicker action."

A brief summary of these Canadian restrictions (and the graph below) are available on a fact sheet downloadable here. A chronology of regulatory developments on e-cigarettes in Canada and elsewhere can be accessed here. 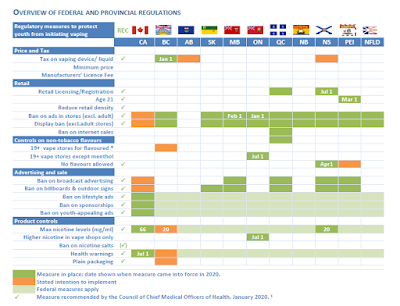 Posted by Cynthia Callard at 06:48