Does vaping lead to smoking? Accumulating evidence of a gateway effect

Science marches on.
Four years ago, there was uncertain evidence that e-cigarette use by adolescents might lead to more smoking later on. Since then, a number of additional studies have been done. While the resutls vary, the evidence now consistently shows that early e-cigarette use is associated with subsequent uptake of smoking.

This post highlights four studies that show how evidence of a "gateway" effect has become progressively stronger over four years.

Jessica Barrington-Trimis and her colleagues analyzed data from grade 11 and 12 students, taken from a longitudinal study of children's health that was conducted in California in 1995, 1998, 2001, 2004 and 2014. Before e-cigarettes became available, smoking among California adolescents had been declining. Then in 2014, combined current e-cigarette use and cigarette use among Grade 12 students reached 13.7%. This was substantially greater than cigarette use in 2004 (9%) and only a little less than Grade 12 smoking prevalence in 2001 -- 14.7%.

These results suggested that e-cigarette use was occurring in adolescents who would not have otherwise used tobacco products. 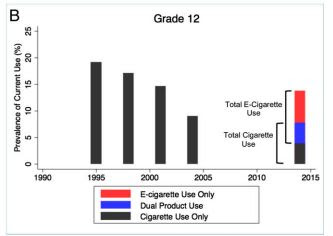 (This type of pooled analysis treats the data from several sources as one larger data set. It is appropriate when the data sets are similar, as they were in the work of Dr. Barrington-Trimis and her colleagues -- data from three similarly-conducted prospective surveys of high school students. When data from different sources are more heterogeneous, meta-analysis is the preferred analytical procedure. Weighting procedures are used to adjust for differences among data sources.)

Dr Samir Soneji and his colleagues performed such a meta-analysis and published their results in 2017. Their results were similar to the results of the pooled analysis discussed above. Based on the combined results of nine studies they found that adolescents who had ever used e-cigarettes were 4.3 time more likely to become cigarette smokers.

Science marches on and studies accumulate. By 2020, more studies on the relationship between vaping and youth smoking had been done and a larger meta-analysis was possible. 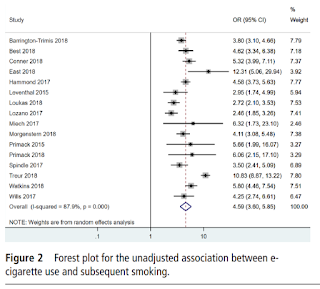 From less certain to more certain

In just four years, through repeated observations, we have moved from a tentative conclusion that e-cigarette use by adolescents might be associated with subsequent cigarette use to very strong evidence in support of a gateway effect. Seventeen studies from several different countries (including one from Canada) all found a relationship between e-cigarette use and subsequent uptake of smoking.

While alternatives to this being a causal relationship still cannot be completely dismissed, it is now increasingly unlikely that the relationship is not one of cause and effect.

The studies cited above:

Soneji, S et al. Association Between Initial Use of e-Cigarettes and Subsequent Cigarette Smoking Among Adolescents and Young Adults. A Systematic Review and Meta-analysis. JAMA Pediatrics. 2017; 171 (8)